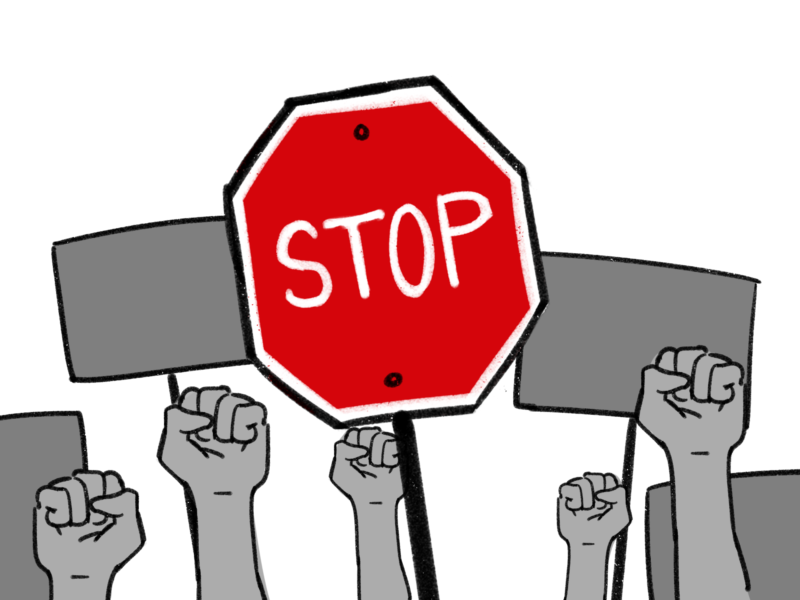 Global efforts to stymie voices of protest, whether through surveillance, policing or military violence, have been met with resounding opposition in recent years. However, it is arguably in universities across the US that the tension between the right to protest and the right to a platform has elicited the most vigorous debate.

There are plenty of examples of this conflict in recent years. Obstructions to speakers range from interrupting speeches with shouts of verbal abuse, to physical violence and vandalism, and instances have been on the rise in recent years.

Following a talk given by Richard Spencer at the University of Florida in October 2017, violence broke out and three men allegedly made Nazi salutes and then shot at a group of protesters, one of whom was sentenced to up to 15 years in prison on counts of aggravated assault with a firearm, and possession of a firearm by a felon.

There were also protests in Middlebury College, Vermont, in March 2017 when Charles Murray spoke. Murray is the author of The Bell Curve, a pro-eugenics diatribe that links intelligence to race and socio-economic class. Murray was shouted down and there was violent jostling, resulting in the college issuing sanctions against 67 students.

A scheduled speech by Milo Yiannopoulos, formerly the editor Breitbart News, in February 2017 at University of California, Berkeley was met with outcry from faculty and students alike. The speech was cancelled due to the violent protests that ensued, but Yiannopoulos returned in September of the same year for “Free Speech Week”. With stringent security in place and a wide berth between Yiannopoulos and the protestors, however, he could hardly be heard.

There is an extent to which people do have a right to express their opinion, but when it gets hateful there should be limits on that

Closer to home, in February 2017, the Israeli ambassador Ze’ev Boker’s talk at Trinity College was called off when protesters blocked the door. Trinity’s Students for Justice in Palestine groupk, an organisation fighting for the rights of Palestinians, were subsequently fined for their protest.

There is plenty of debate around the merits of de-platforming. Speaking to The University Times, Doireann Ansbro, a senior research and policy officer for the Irish Council for Civil Liberties, argues, with a caveat, that a university must remain a place where ideas can be properly engaged with: “There is an extent to which people do have a right to express their opinion but when it gets hateful there should be limits on that.”

She believes that “it’s very important to hear from people who you don’t agree with”, to ensure that arguments are “examined, potentially challenged and contribute to a healthy debate”.

Speaking to The University Times, Joe Cohn, a legislative and policy director for the Foundation for Individual Rights in Education in the US, says that although there has never been a “golden time of censorship-free college campuses”, there have recently been “numerous campaigns to try to get speakers de-platformed.”

Universities are a place where the free exchange of ideas is at the heart of what you do. It’s a place where ideas should be allowed to circulate

According to Cohn, “no matter how controversial their view, there is some value in having it out there publicly, as opposed to confined to the shadows and echo chambers”. When asked if censorship is ever a good idea, he says that aside from speech not protected by the First Amendment to the US Constitution, “the answer is a resounding no”.

One response from students, instead, could be to challenge the speakers’ dogmatism with facts which discredit their points of view, rather than resorting to silencing their voices and inhibiting debate. The persisting commitment to free speech, according to Dr Michael Poliakoff, President of the American Council of Trustees and Alumni, must prevail.

Speaking to The University Times, Poliakoff explains that “the lifeblood of a university comes from its ability to confront ideas that may well be deemed offensive or unthinkable, and we make progress by being able to take up the things that we find most disturbing”. Protestors to far-right speakers, however, argue that their noxious speech exploits egalitarian values and flouts the ideals of tolerance and freedom of expression.

Poliakoff says that American college campuses are currently facing “very serious challenges to the preservation of free speech and the free exchange of ideas”. Such “insidious” attacks represent a wider erosion to the commitment to the principles emulated by the First Amendment of the US Constitution.

But while balanced debate is powerful, and emblematic of a healthy, open culture which universities embrace and advocate for, these provocateurs are very rarely acclaimed for their reason and balance. Some toe the line between contentious and offensive, but others offer views that explicitly target minorities, and all of them voice their views without fear of retaliation – because retaliation is precisely what they want.

No matter how controversial their view, there is some value in having it out there publicly, as opposed to confined to the shadows and echo chambers

Although it is tempting to quell such voices rather than engage with them, doing so has been shown to add fuel to the fire, giving fringe figures more attention. Conservative commentators Ben Shapiro or Milo Yiannopoulos are usually given more attention for being silenced, and like to brand themselves victims of liberal censorship while lamenting the shrinking platform for dissenters at universities.

The opposition to de-platforming transcends rhetoric. Last March, US President Donald Trump signed an executive order that directed federal agencies to ensure that any college or university receiving research grants protects free speech. Though accomplishing very little procedurally – the order ensures colleges are following requirements already in place – this came in the wake of an outcry from voices claiming to have been stifled, including Turning Point USA, a conservative student activist network, infamous for compiling a “watchlist” of left-wing professors.

Several states have also passed campus anti-protest laws which require suspension or expulsion for students or faculty who disrupt speakers at public colleges and universities. By limiting certain kinds of disruptive protest, the International Centre for Not-for-Profit Law warns that the right to peacefully assemble and protest may be limited by some of these bills.

It’s clear that the debate on de-platforming and free speech on campus is heating up, and won’t be dampening down any time soon, as both sides fight fiercely for their rights – and over the interpretations of those rights.