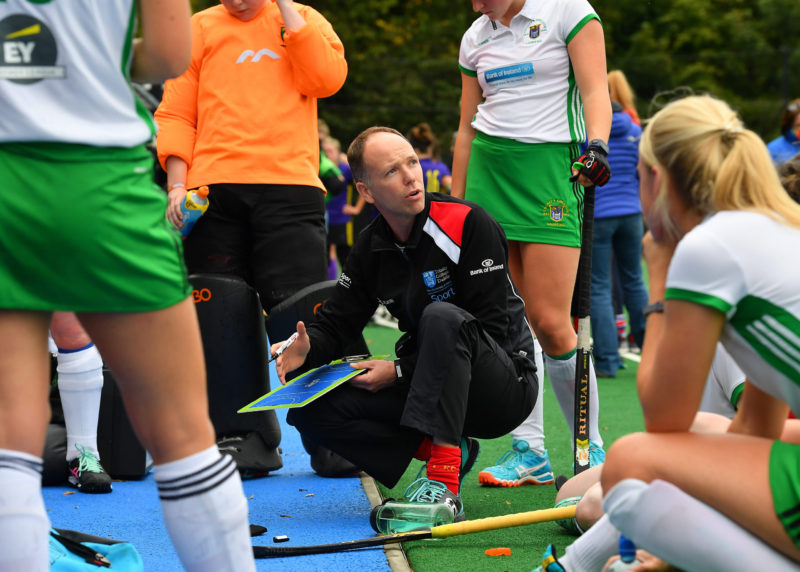 Dublin University Ladies Hockey Club (DULHC) head coach Brian Scully is a man of many words, but his philosophy can be condensed to just a few: “Make the players better. It is the only thing that matters.”

He goes on: “Tactics are secondary. If you have better players you don’t need complicated tactics, so every day is about making the players that little bit better.”

But if Scully’s coaching mantra can be summarised to a few sentences, this is not the case when it comes to other topics of conversation – he is bursting with eagerness to talk about hockey, small details and fine margins.

A sports fanatic, Scully admits that he watches as much as he can without jeopardising his marriage, taking nuggets of wisdom wherever they appear: “You try and take different things from different sports, a bit from cycling, a bit from soccer, GAA and American football and cherry pick a few ideas or a few slogans.” One such catchphrase he is drawn to is New England Patriots head coach Bill Belichick’s motto, “Do Your Job” (occasionally there is an expletive between “your” and “job”).

Trinity returned to the top of the Leinster League Division 1 with a 6-1 win over Rathgar on Wednesday night, but two recent losses against Corinthians and a loss to Banbridge in the Irish Senior Cup have given Scully and his squad cause for some self-appraisal: “This year, unlike the previous years that I’ve been involved with the girls, we’ve hit a bit of a speed bump. We’ve had a few performances and a few results that we don’t really think reflect where we would like to be.”

“We’re still winning games but we’ve just had a couple of bad results and we’ve come to the conclusion that they are not in isolation”, he says.

According to Scully, the players have reacted well to a look in the mirror: “Everybody is very honest. At the level we train at and the level we play at, nobody is there not to win matches. We are quite aware of the level of the teams we’re playing against and we don’t necessarily mind getting beaten if we feel that the opposition are doing things that we couldn’t live with.”

“But we feel that there have been a few games where we haven’t played to our standards and that has costs us a result in games – that’s the line at which we say something needs to change.”

One such change is instilling a “hardness” in the squad. He cites a recent 3-1 win over Clontarf, an older and more physical side who gave Trinity a different type of challenge on the field: “I don’t mean this in a negative sense – but they were more cynical in their tackling and every team is entitled to do that and we found that game to be quite frustrating. And that’s a game and experience that we need to look at and say: ‘Hang on a second, can we not learn something from the tactics that these guys are employing?’”

Having gone unbeaten in the league last season, Scully admits that there is now a “target on the back” of DULHC: “Teams are particularly motivated to play against us – you can see their body language. When Corinthians beat us, they were cheered off the pitch by their spectators and they were celebrating at full-time. They don’t look at it as three points, they look at it as ‘we’ve managed to beat Trinity’.”

Trinity’s last two seasons have ended in cruel heartbreak. In 2018, they lost a relegation playoff that saw them drop back into the second tier of the EYHL. Last April, they were defeated by Catholic Institute in a promotion playoff, denying them the chance to return to the top flight. Both games were decided by the finest of margins.

“This is why all throughout the course of the season we are so focused on small details, because we are aware of the fact that in the last three seasons the definition of success and failure has been by one goal”, he says.

To close such small margins requires meticulous preparation, and Scully tells me that the squad has had to sacrifice some of the more “fun” aspects of training to make strides in the right direction: “We have to put ourselves in the position to be in the [playoff] game this coming season, then make sure our level – from goalkeeper to subs to coaches on the sideline – is two to three per cent better than that game last year. And if everyone is two or three per cent better, then the whole team is going to be 20 to 30 per cent better.”

“It might seem very trivial to be spending 30 minutes of a training session on a very particular aspect of our performance or tactics, but in actual fact we remember when this wasn’t right last April and it costs us a goal”, he adds.

“Ultimately most of the goals are preventable and it’s a matter of trying [to] move the possibility of the opposition scoring slightly downwards. You’ll never get it to be zero, but in hockey if someone is standing one metre in either direction, that is going to significantly tweak that probability.”

Scully does admit that it is difficult to motivate his players when I ask him about these “two or three per cent” drills, and getting his players to see the bigger picture. “It’s boring – players want to play. They don’t come to Santry on a cold, dark night in November to stand around, but from my perspective it’s a balance of making training enjoyable and challenging.”

“You can’t escape the fact that there are elements of sport that are sorted out when people aren’t running at 100 miles an hour, playing games, scoring goals and enjoying themselves. At times you have to focus on the nitty-gritty aspects of where you want players to be on a pitch and how it all interlinks.”

Scully himself represented Dublin University Hockey Club as a student, and is acutely aware of the special atmosphere around the hockey clubs in College: “It is one aspect of our club that we need to hone in on, we are very proud to rep the university. It is something that other clubs don’t have – players look at it as their responsibility to represent the university as well as they can.”

“We have girls on the team at the moment whose parents came to one of the games early on in the season and both fathers looked at each other and realised they had played rugby together for Trinity years ago. So you get these connections that make the group a little bit stronger socially, which helps the performance of the team. You need to draw on the fact that girls had older sisters, brother and parents involved in the club, all of that increases the bond.”

Coming to the end of our conversation, I ask Scully about his thoughts on the success of the Irish women’s hockey team, who recently qualified for the Olympics in Tokyo next summer. He swoons over the impact it has had on the hockey community: “Hockey is a minority sport in Ireland and the circles are very small. Everybody is absolutely delighted for the team. The hockey community gets a lift from it, it raises the profile of the sport which everyone recognizes is going to help bump up the sport.”

With all this in mind, Scully is still focused on the task at hand: there is a job to be done at DUHLC. Unbeaten provincial campaigns – as impressive as they are – do not secure promotion to EYHL. As the season rolls on, we will wait and see if they can bridge those fine margins when it comes to playoff time.