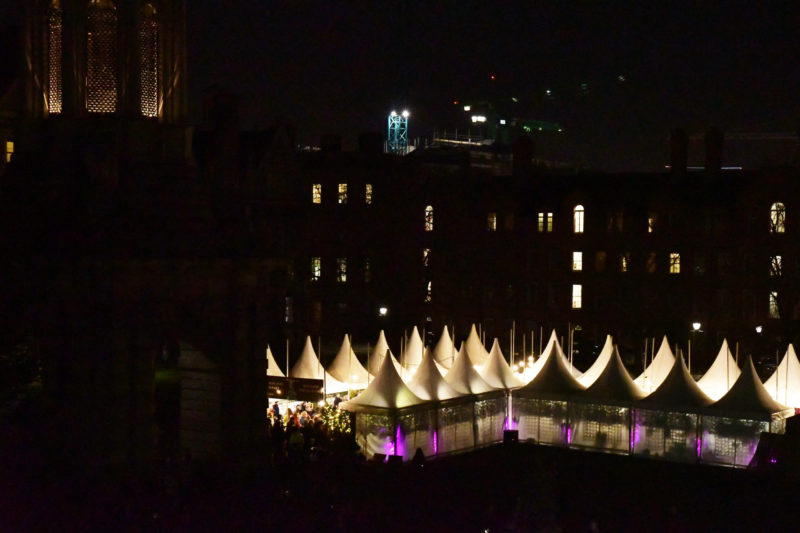 Last night, on the same evening as the lighting of Front Square’s Christmas tree, Trinity’s first-ever Christmas market was held.

Walking onto Front Square on a bitterly cold evening, I was greeted by carolers singing on the steps of the 1937 Reading Room, while the Christmas tree stood waiting to be lit.

The square was packed with people wearing Christmas jumpers and sipping mulled wine from the Buttery. This level of wholesome festiveness was slightly overwhelming, so I turned to the Christmas market – named the Michaelmas Market.

Queuing under the Campanile, shuddering at the thought of the bell knelling to a close my academic endeavours, I watched the crowds wander into the market. The set-up was stunning. Floors had been laid down and the white marquees offered up a festive atmosphere.

Though there weren’t a lot of stalls, I won’t criticise – it’s only the market’s first year. What was there was fantastically varied and I even managed to pick up a few presents at reasonable enough prices.

The market’s vendors were delighted with the space they’d been given to flog their wares. Cúnla Morris, a third-year Irish and history student selling a variety of goods – including earrings, seahorses, pentagrams, vegan cookies and peach emojis – told me: “It’s gorgeous here. We were not expecting this – we thought it would look like freshers’ week. They gave us actual floors and lights and it’s really pretty.”

“I wish they would do this for freshers’ week!”, Morris said.

Éimear Regan of the Douglas Hyde Gallery, who also had a stall, told me: “So far the market’s been really nice, really festive and there’s such a great turnout with loads of people. It’s so lovely to have our own little space here to sell catalogues. We’re selling all the time in the gallery, but it’s really nice to display it here in the Christmas market.”

“It’s been going very well”, she said. “I’d definitely sign up for it again. Hopefully they’ll send down some mince pies this way soon!”

The only things that I think could have made the market more enjoyable would have been a wider variety of vendors, in particular dedicated food and drink vendors. As someone who treats Christmas as a time to eat as much as humanly possible, a wider selection of food and drink would’ve been very welcome.

The other area for improvement would be space. The stewards did an excellent job, but there wasn’t enough space dedicated to the market. In reality it should be brought in front of the Campanile in order to allow more people and vendors, as it was quite cramped at times.

Despite this, my overall verdict is very positive. It’s only the market’s first year and the organisers did an amazing job. It’s festive, it’s fun, and the Christmas tree gave me a decent Instagram post.

Whether you want to get that wholesome feeling of Christmas, or simply escape the endless crushing circle of writing notes in the library that you’ll never have the guts to send to Trinder, you need to head to the Michaelmas Market to get that festive feeling. Welcome back to the silly season.