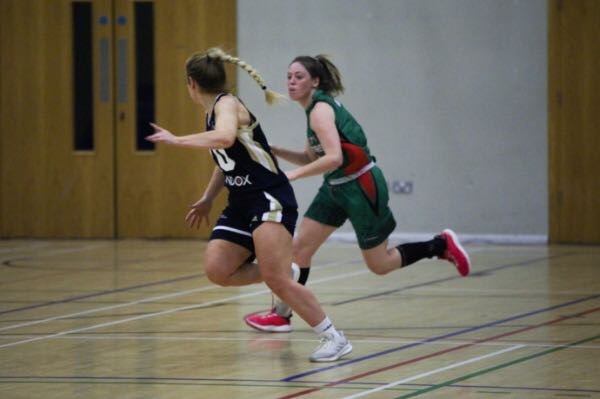 Trinity Meteors defeated Griffith College Templeogue in the Sports Centre this weekend, winning by a score of 82-68 to record their seventh victory of this year’s National League Division 1 campaign.

The first quarter began with Sarah Kenny knocking down a three-pointer, after she took advantage of Templeogue’s zone defence, which was leaving too much space at the perimeter. Kate McDaid showed tenacity as she snatched an offensive rebound and jumped back up to add another early score.

Soon after, Trinity’s Carolyn Binder was left open beyond the arc where she made a smooth three-pointer off an assist from Lauren Grigsby. After another three-pointer from Kenny, Meteors found themselves up 14-6.

Templeogue’s Vernisha Andrews injected some life into her team’s performance: she grabbed her own missed shot and made the layup, before sinking another close-range contested shot. The score narrowed as the quarter neared its end, with Meteors now struggling to penetrate Templeogue’s zone defence. Going into the break, Meteors held a narrow five-point lead.

Templeogue came out strong to start the second, with Lynn Tunnah breaking through on a steal to score the fast-break layup. Hannah Murphy then used her height to make a close-range shot and tie the scores.

After seeing his team getting bullied within the key due to Templeogue’s considerable height advantage, Coach Vinny O’Keefe subbed in two of his tallest players: Sarah Kenny and Lauren Flynn.

Kenny made an immediate impact with a basket off a baseline drive. Binder then made space to score after utilising several screens to shake her defender and drilled the three. Templeogue continued to fight as their bench roared in response to Lauren D’Arcy making a three-point shot.

With the clock winding down for the second quarter, Grigsby – who had been relatively quiet so far – made an emphatic block on Morgan O’Donnell’s jump shot before pushing the deflection up the floor and rolling in a layup a second before the half-time buzzer sounded.

As the third quarter got underway, McDaid drove through the lane, before handing it off to a cutting Lauren Flynn who got the shot to fall off the glass. But O’Donnell helped Templeogue stay within arm’s reach, using her height to make close-range shots at at the basket.

In one of the highlights of the game, Trinity’s Edel Thornton raced up the court after receiving the outlet pass from a missed three. Thornton drove through the lane with a dazzling double cross-over move, before selflessly passing it out to an open Grigsby for a simple mid-range shot.

Despite Trinity’s commanding play, Templeogue managed to stay in the match. They only trailed by four points half-way through the third, after two successful free-throws by O’Donnell.

Their influence on the game started to wane, however, when Joanne Mahon committed an unnecessary foul on Thornton, grabbing her jersey and dragging her down to the floor. The referee deemed it a flagrant foul and Trinity were awarded two free-throws and possession.

Trinity continued to push on in the latter stages of the third: Kenny scored off a post move and Binder knocked down another three. Soon after, Thornton went to the line again and converted two free throws, stretching Trinity’s lead to 13 points.

In the fourth quarter, Meteors looked firmly in command, as Kenny continued her clinical shooting thanks to ball movement that consistently found her open. She made two three-pointers to bring the hosts’ lead up to 16 points.

The game was effectively sealed when Grigsby was fouled on a three-point shot attempt, with the forward still managing to make the basket in the process. The free throw was converted and from there, O’Keefe began to sub in his bench players as the clock ran down.

Some last-minute scoring by Templeogue against Trinity’s bench saw the score margin narrow slightly, but in the end it was a resounding victory for Meteors. The final score read 82-68.

Now on a seven-match winning steak, Meteors are tied for first place with Ulster University in the Division 1 Northern Conference. They will be back in action next Saturday, when they face University of Limerick Huskies in their last game of the year.