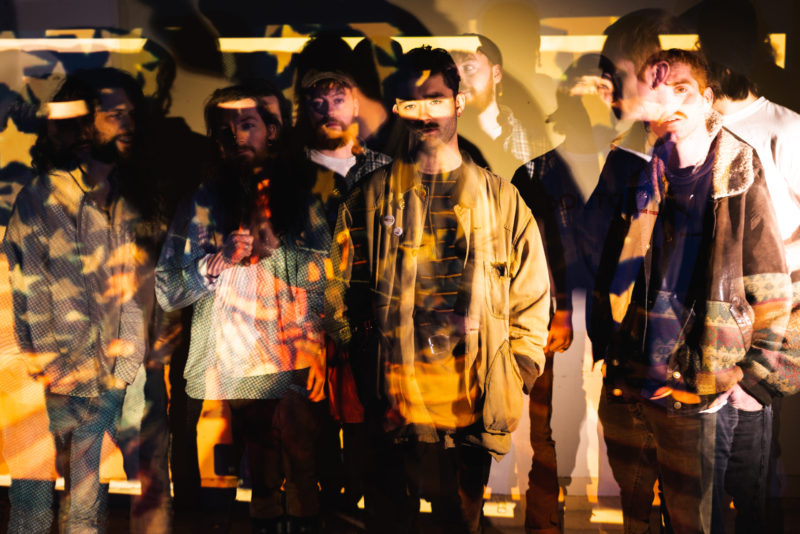 Noise-pop, psych-rock, even bubble-gum grunge – call it what you like, but Thumper are tearing up the Dublin music scene and show no sign of slowing down. Following their immense display at Electric Picnic’s Body & Soul arena last September, the group are currently preparing for their Eurosonic Noorderslag appearance later this week, before departing on an extensive UK tour in February.

The band’s vocalist and creator, Oisín Leahy-Furlong, says their sound – smothered in fuzz pedals to create a lo-fi sound both on stage and in studio – is a product of his own tastes: “I really like that type of music, so when it was imperfect or the recording was kind of scuzzy it sort of added to the whole thing for me.” Any shaky production quality present in the early releases is forgivable, seeing as the first EP was created solely through Furlong himself.

While the band are known nowadays for their lengthy numbers, early tracks were more expeditious, with Furlong attributing the song length to his method of writing. “I had really bad writer’s block, so the whole purpose of the first few EPs was to just write the songs really fast, record them and not really think about them too much – just to get out of the realm of over-criticising yourself.”

The group have grown exponentially in size since their founder’s initial solo tracks. “I think I always envisioned it becoming a band, that’s why I didn’t just call it my own name.” The singer mentions that despite the pride of conceiving an entire release by himself, the band dynamic takes top priority: “It’s a different sort of fulfilment when you start cultivating these relationships on and off stage and they start breeding into one moving part.” The band currently stand six members strong in total – including two drummers. Though it may appear excessive at first, the vocalist justifies the integral aspect of the group’s sound: “It’s just the same logic as having two guitarists really. It’s for the stereo sound, it thickens it up. Once you start going down the route of two drummers, if you start playing with one again it’s just not the same.”

The whole purpose of the first few EPs was to just write the songs really fast, record them and not really think about them too much

Their most recent release, debut studio EP Out of Body Auto-Message, marked a significant step in the band’s progression. Production was handled by Daniel Fox, the bassist with Dublin noise-rock legends Girl Band – a collaboration conceived through a chance encounter at a party. “He did a good job of helping us bridge the gap between that super lo-fi thing into something more widescreen with a layered feel.” Furlong goes on to state that he thinks of the latest release as Thumper’s first EP as a full band, with the recordings depicting the songs of the group’s live set with the justice they deserve.

“In My Room”, arguably the highlight of the release, is an ode to the lonely hermit who refuses to disassociate themselves from their own self-imposed reclusion. Similar tones are also present on the group’s track “25”.

“It’s difficult to articulate yourself properly when you get into that type of headspace”, Furlong says. “I think that’s why those songs are so immediate.” Despite the melancholy, he insists these songs encapsulate fleeting feelings that he may feel on occasion, but not consistently.

“They’re kind of lightning in a bottle. I really like them. But it’s like a conversation with myself, because you’re in that headspace for a short amount of time. It’s like reading your diary and going: ‘Woah, that’s how I felt that day.’”

The personal aspects of Thumper’s tracks are blatant, with the solitary topics likely an aspect that fans can relate to. “A lot of these songs are about feeling you’re alone in some way. And so there’s the movement from writing them by myself in my bedroom, into the rehearsal room, and tonight we’re sold out, playing to about 300 people.” Asked about personal highlights of the set, Furlong says the support of those around him is a reassurance when performing the more sombre tracks. “I’m surrounded by my friends and like-minded individuals, and no matter how out of it I felt at the time writing them, there’s always this.” He chuckles. “Songs like “25” and “In My Room” are pretty pessimistic, but ultimately they kind of change when you get onstage into a feeling like you’ve slayed some kind of monster or something.”

Perhaps Thumper’s most refreshing attribute is their sound – whether it’s the tell-tale fuzz of the melodic section or the orchestrated anarchy of the band’s live shows, they rarely fail to deliver something unique. With plans for a debut album looming, Thumper are well on their way to making their own mark on Dublin’s thriving music scene.