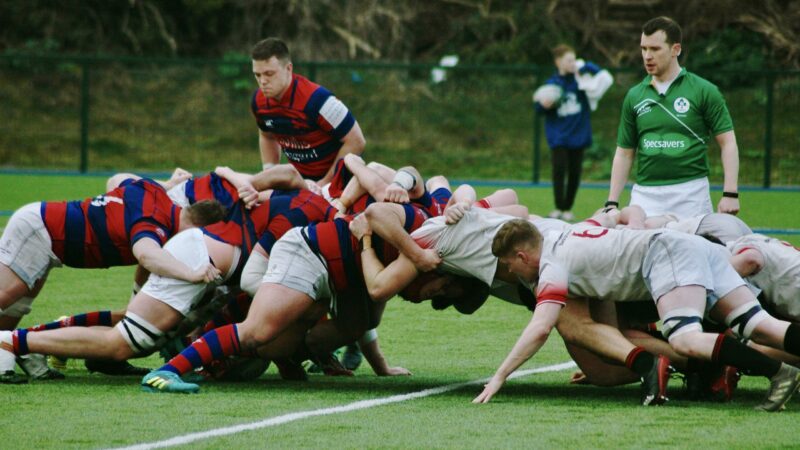 Trinity dominated for extended periods of the match, with sharp, running rugby unsettling the Clontarf defence. The northside outfit played a tactical game, however, stifling Trinity’s fluid play by imposing their slow, physical approach on the match.

Clontarf made the first meaningful assault of the game. Full-back Jack Power made a break for the Trinity 22 after spotting a gap. Quick hands moved the play across the field, but Bart Vermuelen was on-hand to win possession back.

Trinity were complacent coming out of defence, however, and conceded a penalty outside the 22. Sean Kearns kicked over to put Clontarf on the board.

The Clontarf 22 saw some action soon after – James Hickey was gifted the ball directly after the restart, snatching a loose pass before rushing for the posts. Clontarf’s defence held fast before the referee blew for a Trinity penalty after an advantage. Michael O’Kennedy opened his account to make it 3-3.

Despite getting his team level from the tee, O’Kennedy was at fault when his pass was intercepted by Cormac Daly in midfield. He had the pace to carry to the line and crashed over for the first try of the match. Kearns duly converted to open up a seven-point gap.

Trinity upped their intensity after falling behind. A huge tackle from Hickey forced a turnover of possession and a subsequent penalty in midfield. O’Kennedy kicked to touch, pushing playing into the Clontarf 22. Mark Nicholson sent his lineout long, picking out Hickey bursting into the 22. Trinity moved the play across the field patiently, before Dylan Doyle forced the ball over for five. O’Kennedy added the extras.

Trinity kept pushing, and Clontarf struggled to deal with the intensity of DUFC’s attacking play. O’Kennedy converted another penalty won after the away side forced an infringement.

Matt D’Arcy and Michael Courtney combined to try to reestablish Clontarf’s attacking threat, but Trinity dealt with their efforts easily. Robert Russel – a key player in the first period for DUFC – broke for the Clontarf 22 from the flank. He was subsequently chopped down by Power before the play broke down.

Against the run of play, D’Arcy found a gap in the Trinity defence and crossed the tryline in the corner, following a solid Trinity scrum. Kearns converted, leaving the score at 17-13.

Trinity launched a final attack before the break, through Ronan Quinn. Clontarf again held the play up valiantly on their tryline, and a knock-on from Nicholson brough the half to an end.

The signs were worrying for DUFC after the break: Andrew Feeney slipped through the fractured Trinity backline within the first two minutes of the half, diving over to make it 22-13. Kearns, faultless from the tee, converted again.

Clontarf found themselves in the Trinity 22 again not long after. Repeated infringements in the scrum gave the referee no alternative but to award the home side a penalty try, the match quickly slipping from Trinity’s grasp.

The introduction of Donnacha Mescal off the bench triggered a revival of sorts for DUFC: Trinity surged forward in search of a pathway back into the match. Returning to their sharp passing game of the first half, several phases of play saw the ball find its way to Quinn in the corner who crossed the tryline.

Trinity came again: a high tackle allowed Kennedy to kick the resulting penalty to touch. DUFC secured their lineout in the Clontarf 22 – Hogan was instrumental in making space for Quinn, who once again found himself free in the corner. A clever side-step allowed the winger to score his second try of the afternoon, leaving only eight points between the sides going into the last 10 minutes.

Despite the boost of two quickfire Quinn tries, Trinity folded in the latter stages. A soft penalty converted by Kearns, coupled with a sucker-punch converted try from Power in the dying minutes put the result in no doubt. The score read 41-23 at the final whistle.

Trinity remain anchored to the bottom of the AIL Division 1A table along with Ballynahinch after this latest defeat. The absence of six Ireland under-20 players, along with Liam Turner and Ryan Baird, has stretched Tony Smeeth’s side. With these players all out of action due to their international commitments, Trinity must find alternative ways to see off matches if they are to move up the table.

Next up, DUFC play Young Munster in College Park in three weeks time.