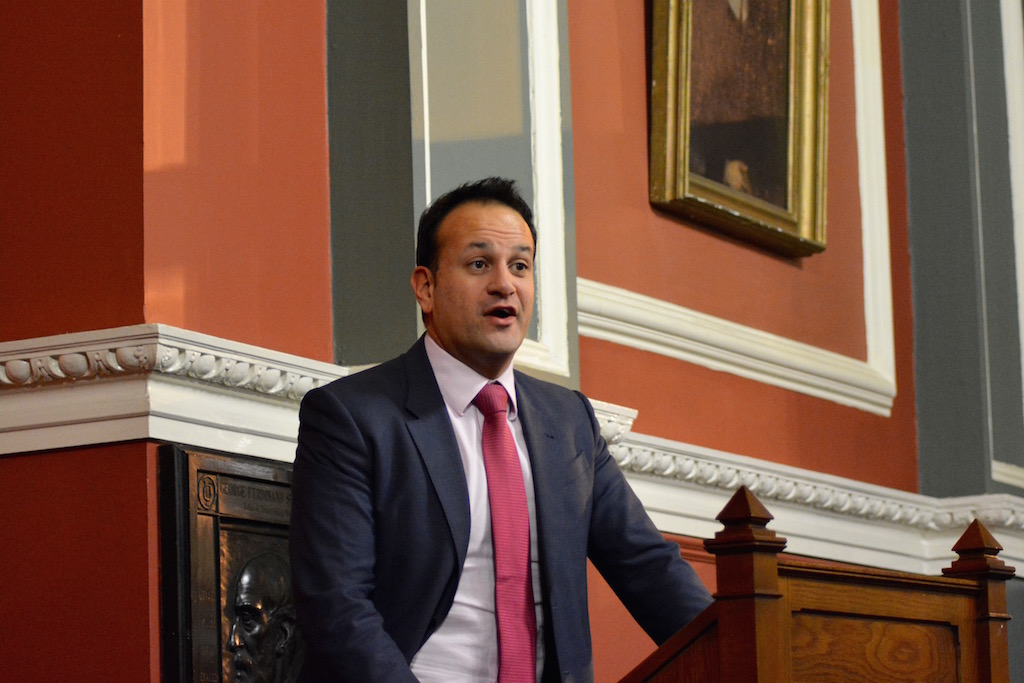 Taoiseach Leo Varadkar speaking in Trinity in 2015.
Anna Moran for The University Times

Ireland will take to the polls on February 8th to decide on its next government, after Taoiseach Leo Varadkar this afternoon announced the dissolution of the Dáil and sounded the starting gun on a long-awaited general election.

Varadkar reportedly informed his cabinet of the election date this morning, before travelling to Áras an Uachtaráin this afternoon to ask President Michael D Higgins for a dissolution of the country’s 32nd Dáil.

The news brings to an end months of speculation about a general election that has seen all main political parties readying themselves to pitch to voters. It will be the first general election held on a Saturday since 1918.

At the weekend, Varadkar told RTÉ that he had decided on a date for the election but could not yet announce. Last week, he met Fianna Fáil leader Micheál Martin for a discussion that both parties called “constructive”, but which ended without any clear commitments on a general election.

For those in higher education, the news will not have come as a shock, but it heralds a three-week period during which the sector’s various lobby groups will be under pressure to make third-level education a significant issue for the country’s political parties. It’s an election that could have significant implications for third-level – or none at all.

It will also see two recent Trinity graduates – Conor Reddy and Rob O’Donnell – running for the first time, for People Before Profit and the Greens respectively.

The Union of Students in Ireland (USI) will launch its election manifesto in the coming days, the organisation’s president Lorna Fitzpatrick told The University Times today.

Fitzpatrick, who criticised a lack of clarity about whether those who have registered to vote in the last year will be automatically able to vote, said the manifesto is “quite broad but very realistic in relation to what we are asking for to be priorities of the next government”.

She added that access to higher education is “is a massive priority for USI”.

Last week Jim Miley, the director general of the Irish Universities Association (IUA), told RTÉ Radio 1 that higher education must be an issue that comes up on voters’ doorsteps. Funding per student, he pointed out, has fallen by 40 per cent – from €9,000 per student to €5,500 per student – in the last decade.

“If we don’t invest, we will find ourselves at a competitive disadvantage in five or ten years”, he said.

Higher education’s stakeholders have for months attempted to push the government into making a commitment on the future funding of the sector, three years after the publication of the 2016 Cassells report.

The government has opted not to pursue any of the three recommendations made in the groundbreaking report, leading to accusations in several quarters that it has kicked the can down the road rather than make a decision on how to fund third-level education.

In August 2019, Minister for Education Joe McHugh said any long-term solution would not come in the lifetime of the then-current government. He told RTÉ that “it will take a new Government composition to bring a big fundamental change” to the funding of higher education, days after ruling out an increase in fees for the next five years.

The Irish Examiner subsequently reported that the Department of Finance had not been consulted on McHugh’s “political pledge” not to increase fees. A “senior government source” told the newspaper that McHugh’s comments formed part of a co-ordinated effort from the Taoiseach’s office to appeal to voters ahead of a general election.

“This was a political promise and Finance had no role or input to it being made”, the source said.

In the same month, in an interview with The University Times, Provost Patrick Prendergast said higher education could become a “crisis issue” if the government fails to invest in the sector soon, arguing that the idea of introducing an income-contingent loans scheme “should be investigated further” in a bid to tackle the problem.

A month later, Prendergast told the Sunday Business Post that loans schemes “would open up university to more people. Many of our students are doing part-time jobs, which takes them away from their studies. If they had access to an income-contingent loan system, they may prefer to do that rather than lose study time”.

Prendergast has also threatened to cut Trinity’s admission of Irish and EU students in the coming years, arguing that Trinity’s 44-place fall in this year’s Times Higher Education rankings – a decline that raised eyebrows throughout the sector – “comes down to money in good measure”.

Prendergast’s proposal sharply divided the College’s Fellows, with some rejecting it for “moral reasons” and others arguing it was “only option available” to the College in order to reverse the slide.