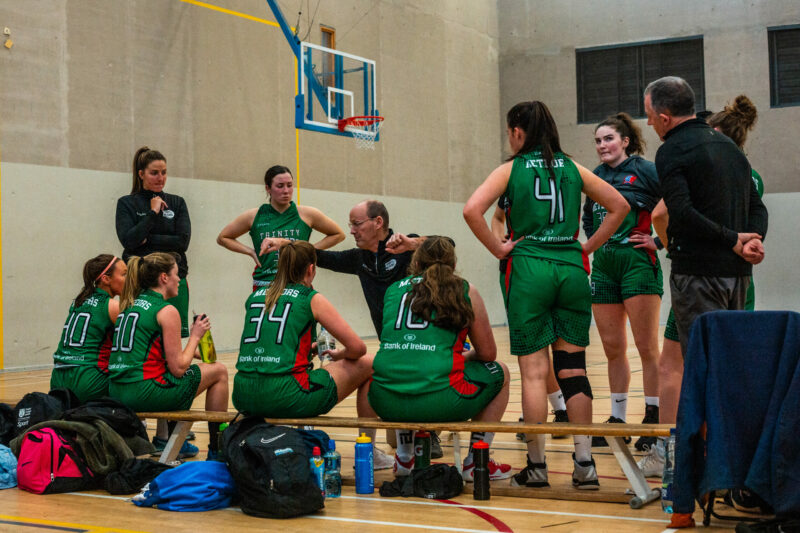 Basketball has been a part of Vincent O’Keefe’s life for nigh on 50 years, ever since he began playing for his school team at The Jes in Galway back in 1974, the year of his own intercert. Vinny, as he is better known, began coaching his own kids after he retired in 1985, and from there his coaching career took off. He hasn’t looked back since.

O’Keefe came to Trinity as a coach after the merger between the Meteors and Trinity basketball last year, and after Seamus Donnelly, a professor of medicine in Trinity, approached him.

O’Keefe tells me that Geraghty’s philosophy revolved around player-management, and making sure it was always about the players: “He was very inclusive. He was a good man manager. He had a good way of talking to people and keeping them all on board and involved. He never suffered from his own self-importance. He always was very humble and tried to keep it all about the players, so I’ve tried to follow a bit of that.”

With a wide array of talent available, O’Keefe knows he needs to let everyone play, or face the consequences: “When you’re playing voluntary basketball, the only enjoyment is you have to play. You have to try and get time for them on the court so you’ve gotta mix that, compensate with giving them time on the court and trying to be successful at the same time.”

Interestingly, O’Keefe, who won Basketball Ireland’s coach of the month award in both November and December, takes a good bit of inspiration from his coach at The Jes, who he says knew nothing about basketball

“Some teams, when I was playing there were players who just sat on the bench all year long, and they gave it up the following year. So, if you’re going to ask these girls to train four days a week, which we do, you’ve got to make it worth their while. It’s a fine line.”

It’s a line O’Keefe has trodden remarkably well this year. His team reached the national cup final, while also only suffering one loss in the league to date – one which he tells me was a tough loss to take.

“Well that loss was tough, we went down to Kerry. We didn’t play very well at all. The referees didn’t help us: they gave the other team 39 free throws, which is a lot.”

“Now, I’m not going to say they influenced the game, but we didn’t play well at all, and that was a loss in overtime. It’s a game we should’ve won but didn’t win. They made us play their type of basketball.”

When asked how he went about motivating the team after such a difficult loss, O’Keefe went on to praise the team on how they responded, claiming he had little impact, and it was the leaders on the team who kept everyone moving.
“Nothing to do with me”, he says. “We had a great weekend where we focused a lot on the character.”

Thornton is part of a rake of new faces at the club. After nine players departed last year, O’Keefe was left with only a small number of players.

“It’s been great, the team last year, a lot of them retired – nine of them retired so we were left with just three players”, he tells me. “This year’s team is a brand new team and it’s made up of six girls who are actually studying in Trinity, just the way it’s worked out, and six girls who have been affiliated with Meteors all their life.”

O’Keefe credits the new cohort with this year’s success, gushing over the talent that they’ve added, as well as that which they already had: “Well we’ve been very lucky. Edel Thornton’s come on board, and she’s been highly touted, [an] Irish girl from Cork who is studying in Trinity. Our American girls have been great. They’ve come from division one colleges in America, and Sarah Kenny was there last year. She was injured most of last year so she’s just come back this year. She’s an ex-Irish international.”

“So, marry that with the Meteors players we have, it’s been excellent.”

O’Keefe loves to simply let his players play, and quickly interjects when I ask him if he would consider himself a defensive-minded coach: “My idea would be that, the only way to get people playing – to get them happy – is to play a very up-tempo, fast game. The idea would be we front court press all day long, so we aren’t letting the other team come to us.”

This is where his large squad of talented players comes into play. Their vast bench gives them the edge over teams, and O’Keefe considers it a large factor in their inspired comeback in the cup semi-final.

“Now no matter how fit you are”, he says, “you aren’t going to be able to last the whole game, so we run that style of play: the girls get tired after five minutes, then we get more players in”.

“Get fresh players in, so the strength in depth we have in the team allows me to do that, whereas you couldn’t do it if you only had five or six players.”

“So we are trying to get a style of play going and that’s what helped us [in] our semi-final, because I think we just wore them down eventually. They came out of the blocks very fast and our style of play just wore them down until they were tired, and the shots they were making in the first quarter – they were too tired to make them in the last quarter, and we were still keeping going.”

Promotion is the ultimate goal for O’Keefe and the Meteors this year, and one which they are right on track to achieve. He is hoping that this, along with the benefits of last year’s partnership, will drive the team on to the next level.

“We are trying to set up a system where players who are applying for a scholarship in Trinity, whether Irish or American, they must play with the Trinity team.”

“That’ll allow us to maybe cherry pick some of the better players, if they want to come and play with us. What’ll also help us would be if we get promoted, players will want to play in the Superleague.”

Perhaps promotion to the Superleague would see the Meteors current rise grow more rapid, as players who turn their noses up at a Division One team begin to see Trinity as a viable option to play basketball for. With O’Keefe at the helm then, Trinity may well see its basketball team become one of the most successful college teams in the country.