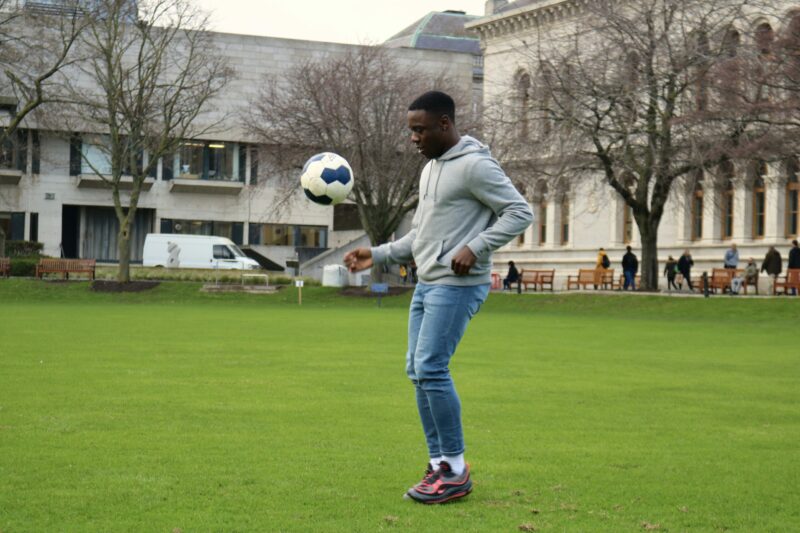 I’m sitting in the Pavilion Bar waiting to meet Jason Boateng, the captain of Dublin University Association Football Club (DUAFC). I study the plaque of former DUAFC captains. I study the names and see Boateng’s has not yet been inscribed. Next week, though, he’ll lead his side into this year’s Collingwood Cup.

Boateng is the first person of colour to wear the captain’s armband at DUAFC. When he arrives, I ask him if this milestone has ever occurred to him: “Yeah it has. The 2016 captain, Dylan Stacey, he brought it up – when I came into the dressing room after the summer and I was announced captain.”

On and off the pitch, leadership seems to come naturally to Boateng. His services are indispensable for DUAFC. For his opponents, he’s a nightmare, with his ability to shut down counter-attacks before switching to attack and driving at defences with thundering pace.

From the minute he walks in and shakes my hand, Boateng exudes energy and enthusiasm. I ask him if being captain was something he envisaged happening to him starting off as a fresher: “I was playing with a football club in Clondalkin. And they [DUAFC] handed up a transfer request. And at the bottom of the request it said: ‘We see him as a future captain.’”

For his opponents, he’s a nightmare, with his ability to shut down counter-attacks before switching to attack and driving at defences with thundering pace

“I showed my friends the other day actually the little request. I guess they saw the potential in me and here a couple of years ago, and here we are now.”

Juggling academics and sports is always tricky. But it’s only this year that Boateng, starting his final term of environmental science, has started feeling the pressure: “Coming into final year, with thesis and stuff, and also being captain as well, it can be difficult. But it is good to be the role model. I have to be at training all the time. But am I proud of it? 100 per cent.”

DUAFC’s league form has taken a hit in the last month. Boateng says form tends to dip around Christmas: “We have a really good start to the season and then it sort of slows down. I think that comes with [being] students. We are a student team so students have exams and essays.”

“At the start of the season we have about 50–60 odd players down training and it just slowly dies down. Hopefully again we’ll have another flow of players coming down.”

Goals obviously win games. For DUAFC, the lack of a natural striker has stifled some potential victories. With just 17 goals in the league, Nairn still injured and captain Ronan Hanaphy having departed the club, Trinity have been forced to look at alternative sources, and Boateng admits: “We’ve been lacking up front, to be honest.”

But if their league form has been mixed, Trinity are now focused on the task at hand: the Collingwood. Boateng sees it as an opportunity to show DUAFC’s worth: “I feel like soccer in Trinity is really looked down upon. I feel like every year we’re trying to counter that and try go one step further.”

“Last year we weren’t even in this part of the competition at all. So this year our aim is just to even win one game and see how that goes really.”

I feel like soccer in Trinity is really looked down upon. I feel like every year we’re trying to counter that and try go one step further

The team are eager to live up to the sense of expectation that comes with being hosts of the cup: “There’s a lot of pressure on Trinity to do well. But with that being said, with hosting it there’s a bit of a buzz around the club. Amongst the players too, we’re all putting in the extra training sessions and extra gym sessions as well. So we are definitely looking forward to it.”

That extra bit of physical training may come in handy as Trinity come up against cup-holders University College Cork in their quarter-final on February 3rd. Although Trinity will be underdogs, the unpredictable nature of knockout football ensures nothing is set in stone.

Boateng, a leader on and off the pitch, radiates determination. He’ll be hoping that those around him will match his taste for success when February 3rd rolls around.