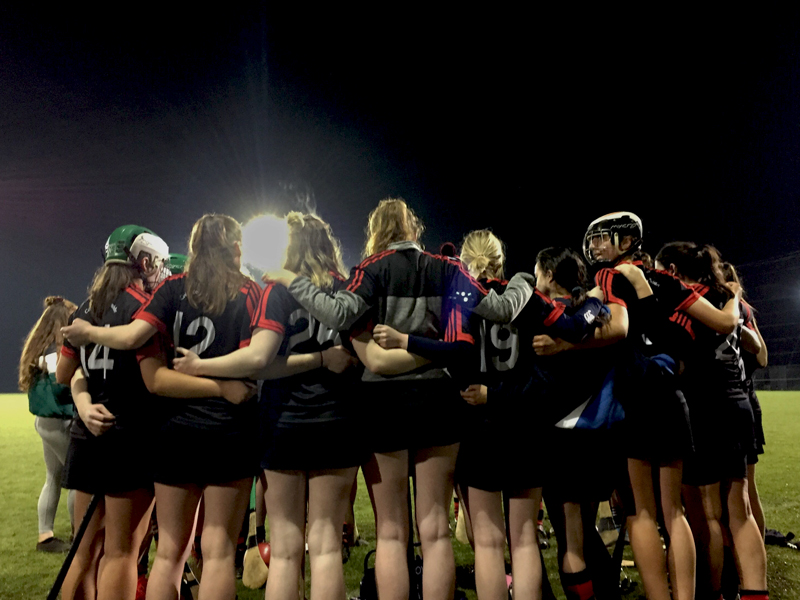 Trinity Camogie won their second group stage match of the Fr Meaghair Cup last night after holding off Queens University’s resurgent second half display, defeating the northern side 1-11 to 2-5 in Santry.

Trinity came under pressure early on as Queens responded to the opening whistle with intensity, stringing together several passes to make their way into the danger zone near the Trinity goal, but a strong clearance from Aoife Higgins snuffed out the threat.

Laura Stack opened the scoring for Trinity after drawing a foul and splitting the posts from long range with the resulting free. Moments later, Queens’ aggressiveness cost them again, giving Stack another opportunity to showcase her accuracy. She made no mistake with the dead ball.

Momentum changed quickly once Queens’ Niamh Burns made an impressive offensive run, breaking through two of Trinity’s defenders before smacking the sliotar into the back of the net to give her team the lead.

Yet Trinity maintained the pressure, patiently taking their opportunities. The highlight of the half came when Trinity’s Julie Healy shook off two defenders with a spin move. Coming away with possession, she laid the sliotar off to Juliette O’Flynn who took her score on the run.

The visitors persistently failed to harness their aggressive play, gifting a number of frees to Trinity. Stack was virtually faultless from the dead ball, punishing the Ulster side’s indiscipline. Alongside Stack, Molly Walsh was a key contributor on the offensive, with two impressive scores sailing over before the end of the half.

With Trinity dominating possession, opportunities in attack for Queens were scarce. When tested, Trinity’s defence found their form after conceding an early goal. One scramble in front of Trinity’s goal could have easily led to three points for Queens, but Heather Doyle tenaciously took control before producing the necessary clearance.

In what was a deflating blow for Queens immediately before the end of the first half, Laura Stack made a long run before having a shot on goal. Though not hit that hard, Queens’s goalkeeper mishandled it and Stack raced to slap the loose ball on the ground and into the net for the three points.

In the second half, Queens stepped up their performance and slowly chipped away at the deficit, converting a number of frees of their own. Leanne Donnelly for Queens scored an impressive point after her shot from near the sideline eked over the crossbar.

Soon after, Queens launched themselves back into contention, when a deflected shot fell to Aoife Colman who quickly slotted it in for the away side’s second goal of the match.

Trinity remained composed as they determinately sought to hold on to their narrow lead. Stack converted another free but Donnelly responded soon after with another score from near the side-line.

Desperate not to succumb to another goal chance, Trinity’s defenders played with amped-up intensity. Lizzy Murray stopped a threat dead in its tracks, making a superb tackle to retake possession. Queens came again: Racheal Flynn had broken through the defensive line, and it seemed certain she would fire the sliotar through the net. However, she took too long to pull the trigger, allowing Walsh to recover from behind and make a crucial tackle that prevented a goal.

The whistle blew soon after Laura Stack tacked on yet another score for Trinity to consolidate their lead. Despite occasional sparks of brilliance from Queens, Trinity looked the more dynamic side for most of the match, and the score line of 1-11 to 2-5 was a fair reflection of the game.

Trinity’s strong showing in the league earlier this season has stood to them. With two wins from two in the championship, the camógs will be brimming with confidence when they travel to St. Mary’s for their next Fr Meaghair Cup clash.