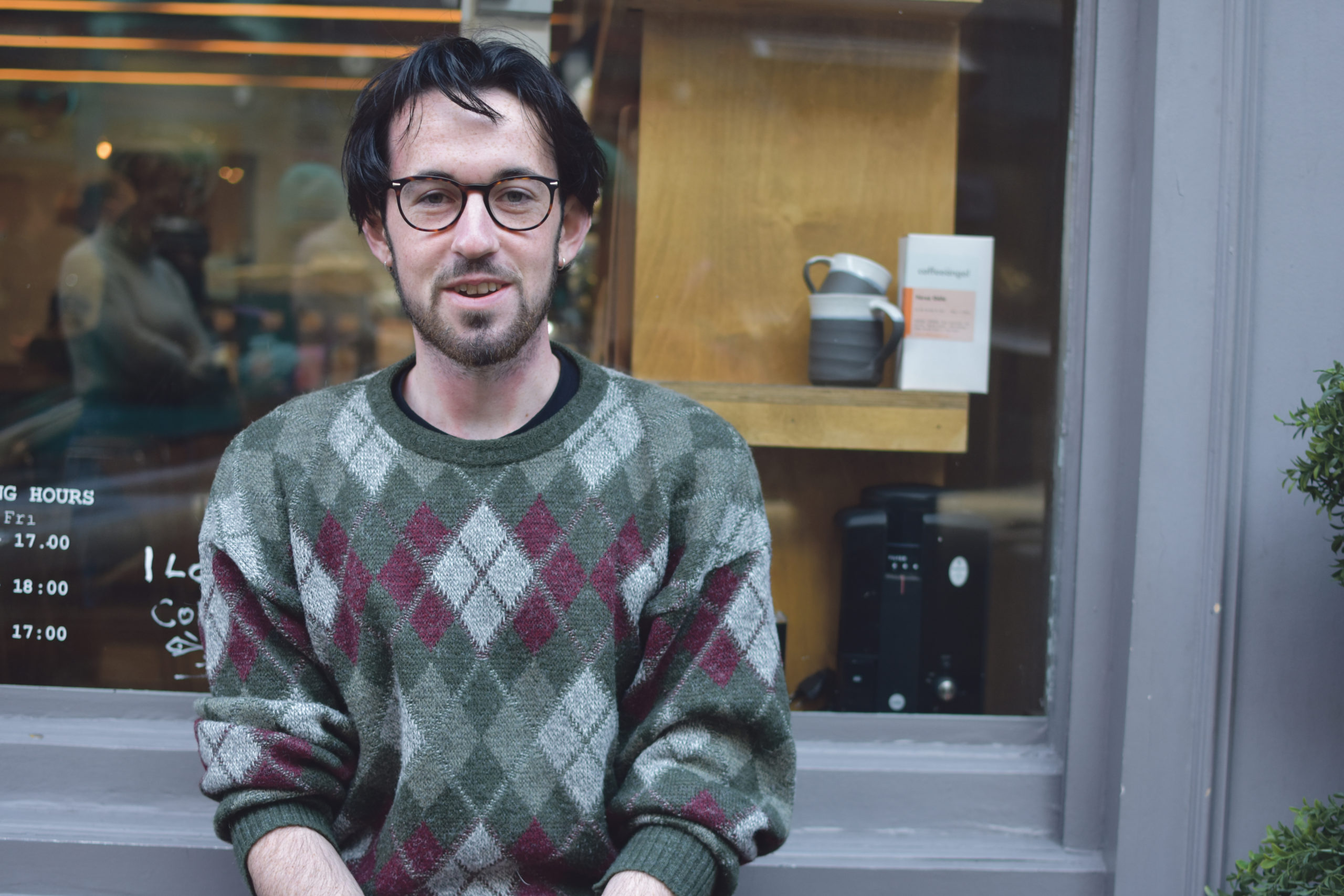 It’s a freezing cold Monday morning and I’ve come to Coffeeangel on South Anne St to interview independent art curator, art technician, and creative director of Taifead, Eoghan Scally. After graduating from Trinity with a bachelor’s degree in history last year, Scally decided to hold off on doing a master’s or getting a job in a soulless consultancy firm, and instead has spent the last five months trying to break into the Dublin art scene as a young curator.

Taifead’s mission is simple. Speaking to The University Times, Scally outlines the goal behind this venture: “We’re aiming to record, curate, represent and exhibit creatives, spark debate, discussion and engagement. Basically, we’re trying to show young Irish creatives’ work in various places in Dublin.” It’s no secret that cultural spaces in Dublin are in short supply, but after only five months, Scally has successfully curated and displayed three exhibitions.

Though his first two exhibitions were shown in the same location, Five Points cafe, Scally is quick to point out that he’s in the process of securing other venues for his shows. “At the moment I’ve one space but I’ve a potential four other spaces that are upcoming. For young creatives at the moment, in a city that’s constantly diminishing in terms of size, I have the opportunity to use these spaces – they’re not amazing spaces, they’re not gallery spaces, they’re cafes, but I have the opportunity to use these spaces and show their work.”

His biggest show so far, entitled Seeking Refuge and included in the Festival of Politics, took place last week. The show was formed primarily around the photography of Eamon Carr, former drummer of the Horslips. The photographs, which were taken in 1999 in Kosovo, take a raw look at the refugee crisis in the country at the time. These pictures, Scally says, mingle with each other to form an overarching impression of “crossing borders”. He elaborates: “Physical borders, emotional borders, youth borders. The physical borders are represented as these refugees have had to travel for days and days, there’s the emotional borders of kids who have been introduced to war, been introduced to arms. They’ve somehow traversed this border of youth to adulthood, of innocent bystanders to being involved in war.”

This exhibition is significantly more high-profile than Scally’s cafe exhibitions, and his success in securing the never-before-seen work of Eamon Carr is highly impressive. Amazingly, the young curator tells me he wasn’t satisfied with just the photographs. He wanted the event to be more immersive and multifaceted than a straightforward photography show. “The photographs are around while Eamon is talking, while he’s reading one of his pieces, Kenn O’Duffy is performing throughout all of that, and some of his poetry is read.”

When I ask Scally why he opted to incorporate so many different artforms into this show, he insists that he wants his shows to be “consumed”, not just viewed, and that having a multitude of engaging art forms in one room is key to this. He explains: “That whole thing of engagement. I want to use the poetry because I want you to engage with the work, and I want you to understand something beyond the photographs. That is the whole thing of engagement. I want it to cover as many disciplines as I can.”

Scally wants to change the way we experience art: he has no desire to emulate the traditional viewing experience available in Dublin’s oldest galleries. “If you go to the National Gallery, you’ll walk to the end of the room and you’ll walk back and you’ll look at the art but you won’t actually consume the art.” Scally expresses his frustrations with these traditional forms of exhibition. “So many times we go to these galleries and we don’t actually take it in. You go and you take a picture and you say ‘that’s fucking unreal’”, he says and he gives a sarcastic thumbs up to an imaginary camera. “You can show everyone that you went there, but you don’t actually look.”

For someone who graduated last year and only got into art curation five months ago, Scally is undeniably ambitious. However, considering the success he’s had in such a short space of time, Scally’s ambitions don’t seem far fetched. I’m amazed that he’s managed to put together three shows in five months, find spaces for these shows in Dublin and secure the interest of high-profile artists, particularly Carr. He tells me that Dublin’s art scene is tiny, and that he’s learned to use this to his advantage.

“Dublin is really, really small. Relationships are essential”, he explains. Scally worked full time in a coffee shop until two weeks ago, when he stopped working to focus on his show with Carr. Working in a cafe, Scally utilised the social nature of the job, networking with any creatives who popped in to get a coffee. “Greg Spring [founder of Hen’s Teeth] came into the coffee shop once and I went over and said, ‘I love what you’re doing in Hen’s Teeth, and if you’ve any opportunities’ and whatnot. And nothing came of that, but now he knows my face and he knows my name.” Notably, Scally also met Carr through cafe work, not through any kind of exclusive art event. “I know Eamon from the coffee shop I worked at, he’d come in every day at like four o’clock and have a coffee and I’d always sit down and have a chat with him.”

This kind of networking, day-to-day chatting with strangers in coffee shops, actually works in Dublin. In fact, talking to Scally, I get the impression that Dublin is a more like a village than a capital city: everyone really does know everyone. “You won’t believe how many people who know someone who knows someone who knows someone.” In this sense, Scally has used the small-scale nature of Dublin’s art scene to his advantage.

Scally’s long-term goal is to have a permanent space to show the work of Dublin’s young creatives, but he asserts that Dublin’s art scene will thrive regardless of physical space for artwork. “The buildings make it easier but they’re not the be-all and end-all. There’ll always be artists. Creating opportunity for them is the most important part.” And by utilising smaller spaces, re-imagining exhibitions on a conceptual level and using the city’s limitations in terms of size to his advantage, Scally is ensuring that Dublin’s young artists have the room to display their work.