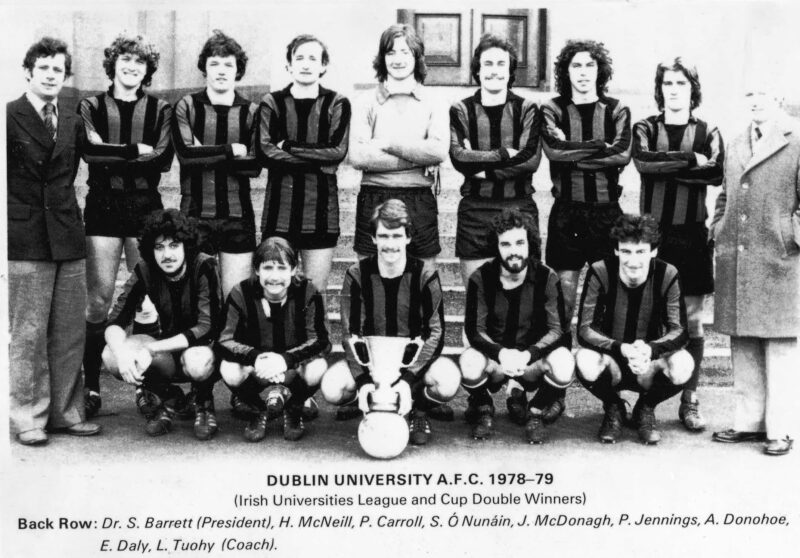 As Dublin University Athletic Football Club (DUAFC) gear up to host the Collingwood Cup next week, the chance to end their 41-year drought in the country’s premier university competition should provide them with ample motivation. For Ken Le Gros, the captain of the 1979 Collingwood Cup-winning side, being a part of Trinity sporting lore created memories that last to this day.

Le Gros remembers the sense of optimism surrounding the team at the time: “We won the universities league in 1977, so things had been moving in the right direction for a number of years.”

This DUAFC side was coached by former Shamrock Rovers and Ireland coach Liam Tuohy, who presided over the development of icons such as Johnny Giles before coming to Trinity. “It was a great group of players, but without the right management it doesn’t happen. He had to adjust from managing Shamrock Rovers and the Irish national team to managing what was in 1975 a ‘Rag Ball Rovers’ university team and try to get them into some sort of shape.”

Securing the services of Tuohy was an incredible coup for Trinity – an ex-international manager coaching a university team is completely unimaginable in this day and age.

It was the biggest crowd that had ever attended a match at College Park. Definitely at least 1,000 people

In 1979, Le Gros was a final-year student and had never played for Trinity until that season: “I was pursuing a career with Bohemians and [Shamrock] Rovers at the time and it was going okay, but I hadn’t broken through. I decided to throw my lot in for my final year of college, and I wouldn’t have done that if it hadn’t been for Liam.”

“He got into the heads of students and got us thinking like footballers, which not many people could have done, because students tend to have their heads in the clouds. He attracted every good football player in Trinity to throw their hat in.”

The 1979 Collingwood Cup was hosted by both Trinity and University College Dublin (UCD), and was contested by 13 teams. Two wins against NIHL Limerick (now UL) and Queen’s, alongside a draw with NUU (now Ulster University), saw Trinity out of the group stage and into the last four of the competition, where they would play co-hosts and Dublin rivals UCD.

“I just remember the referee of our match called me over after the final whistle against Queen’s. The UCD captain appeared out of nowhere and we tossed a coin for home venue in the semi-final. It was a huge relief when we got them at home.” It was a welcome slice of luck for DUAFC – it set up a bumper home derby, which was big news around the campus.

“The semi-final against UCD is probably best known for two major factors. It was definitely the biggest crowd that had ever attended a match at College Park. Definitely at least 1,000 people, they were two or three deep around the pitch. The whole college had heard that we had gotten to the semi-final, and then when it was UCD at home it attracted that crowd. It was an incredible atmosphere on the day.”

“The second factor that was really unusual was that Hugo MacNeill was playing rugby for Trinity at the time, but he was also a very good soccer player, so because we were struggling with centre-forwards, he was asked if he would consider playing if we got to the semi-final.” In front of a raucous home crowd, MacNeill set up Trinity’s first goal and scored the winner himself in a 2-1 victory as Trinity advanced to the final.

Trinity marched on to the final against Maynooth and would play their fifth game in as many days on the Saturday. “Virtually the whole team who started on Tuesday played all the way through to the final, with Hugo probably being the only one who was fresh, and Maynooth had played a game less to get there too.”

“My abiding memory of the final was that it froze the night before the final so when we arrived to play, the side of the pitch that was nearest to the Arts Block, because it was shaded by the buildings and the trees, was completely frozen, and the other half was a mud bath. It was the most unusual circumstances that I had ever played in.”

MacNeill produced another Roy-of-the-Rovers showing, scoring both goals in a 2-0 win. “We got ahead and they never really came close to scoring. Hugo got a really fantastic goal with his head. He just met my cross from the right and headed into the top corner and the keeper had no chance.”

There is a sense of mythology surrounding this cup run. A tossed coin, a half-frozen pitch and a borrowed centre-forward later, a Trinity team managed by a former Ireland manager were the best university team in the land. Le Gros is effusive in his praise of his teammates.

“Brian McSharry was a university international. He had a fantastic Collingwood and scored some vital goals. He had an engine like a Roy Keane sort of a player. Left-back Ant O’Donohue, who was a League of Ireland standard left-back with plenty of skill, and George Humphrey, who was a tiny little guy who had Georgie Best skills – he scored and created a number of goals in that Collingwood. A super player.”

And on the hero MacNeill: “He was a top-class player and he would have played professional soccer if he hadn’t been such a good rugby player. That was a huge boost for the team and without him it would have been a struggle – we mightn’t have won if he hadn’t played.”

DUAFC went on to win the league that season and a challenge match was organised with another double-winning side: FAI league and cup double-winning side Dundalk. A narrow 1-0 win for the professional side indicated the calibre of this historic team.

Some 41 years later, Trinity kick off their Collingwood campaign against holders University College Cork (UCC) in College Park on February 3rd. Le Gros will be keeping a close eye on proceedings: “I have it penciled in to go to the game against UCC. Hopefully with home advantage this time around they’ll give it a bit of a run. If you get a good turnout at a match, how it lifts the team.”

DUAFC have been runners-up four times since 1979, most recently in 2015. If they can capture some of the spirit of 1979, they could very well be looking back on some history of their own making in years to come.