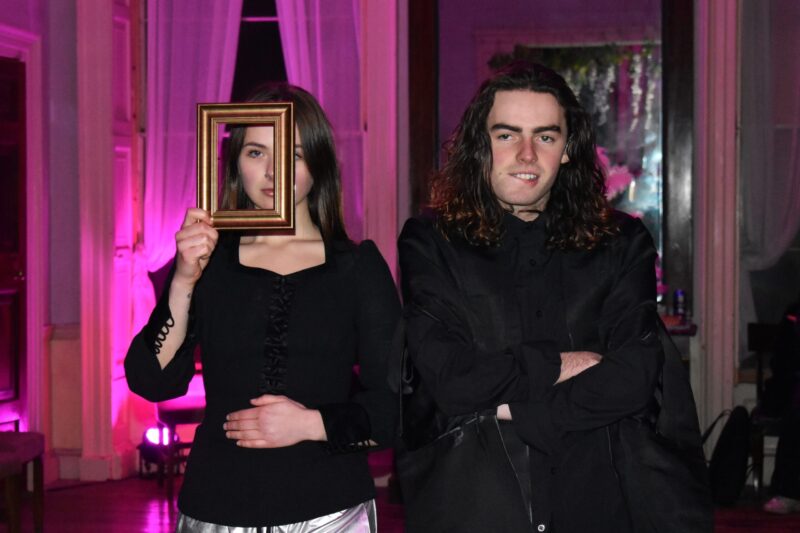 On Tuesday evening, 12 Henrietta St saw the return of the student favourite; the Trinity Arts Festival (TAF) Murder Mystery. This year the event was set at Grimes and Elon Musk’s babyshower, and the free tickets were all gone in under an hour.

Upon arrival the baby shower was a sight to behold: the 18th-century Dublin townhouse was glowing a mysterious pink and blue, and as the guests poured in to say their congratulations to the expectant parents, there was an air of excitement.

After an hour of mingling, we were gathered into a large, decadent room and introduced to the evening’s special guests. Elon Musk appeared, with monopoly and business jokes aplenty, and invited us to meet the stars he had assembled for his party. Grimes was a hilarious, ditsy brunette with a lisp, over-excited to be the centre of attention.

From Bernie Sanders and Adam Driver to Mozart and Björk, Musk had made sure all of his favourite people from history are in attendance (with the help of his newly designed time machine, of course). We met the celebrities in twos, and in a multitude of accents and elaborate costumes they presented themselves to us, nudging at their suspicious and sometimes dangerous relationships with one another.

All of a sudden, Musk grabbed his throat and began to choke. Swiftly he fell to the floor, and the guests began to scream. There was mass confusion and dismay, until a polite British butler told us to be quiet. He announced that he was a detective, but he could not solve the case alone. As guests, we were told to disperse about the house and question the celebrities on their potential motives for this crime. There were three sets of clues to be given out throughout the evening, and eventually the murderers and their motives would be revealed. The guests were thrilled, and the buzz of laughter and interrogation filled the room.

For the next two hours, it was up to the actors to stay in character. Two hours of improvisation is a tough feat, but each pair of celebrities brought unique and amusing twists to the story. Marie Antoinette and Oscar Wilde were a classic duo, hoping to set up an independent baking business together. 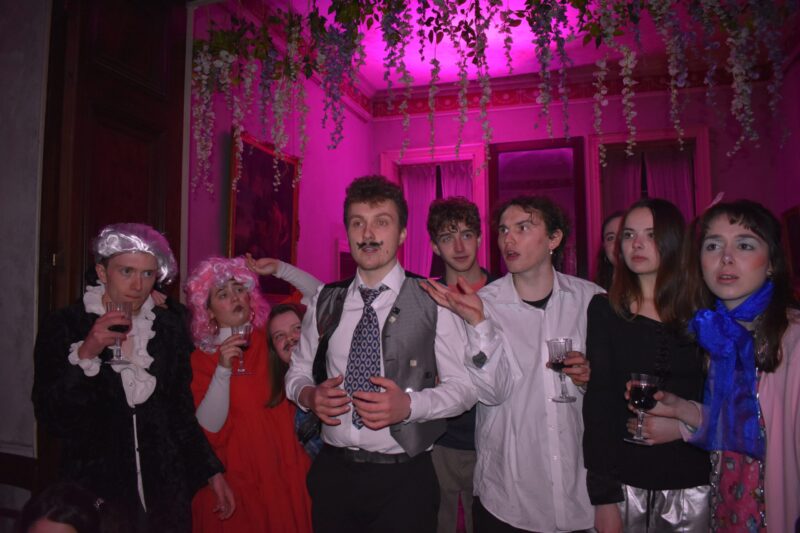 Leonardo da Vinci and his wife, the Mona Lisa, stormed about angrily, heading inevitably for immediate divorce. Björk and Mark Zuckerberg, an unlikely pairing, seemed to have a vendetta against Grimes, and if the chains around Björk’s neck weren’t a fashion choice, they were definitely intended for damage.

Both from the 60s but centuries apart came Mozart and Ringo Star, a questionable duo who struggled to see eye to eye: Mozart was not enjoying being in a world of “modern” music. Lastly, Adam Driver and his doppelgänger, Adam Driver, were an entertaining couple, with incessant singing and catchphrase-blurting that didn’t quite make up for the fact that they didn’t win the Oscar for Marriage Story.

There were multiple plot threads that could lead to the murderers and their motives, and the story that developed was complex and packed with detail. The 12 actors who carried this story must be commended for their impressive improvisational skills and homage to the plot – they did justice to a well-written and thoroughly comedic story.

But who did it? After a final set of clues, the guests were asked to write down their thoughts on the murderers and their motives. The winning answer was shared by three pairs of guests: with Elon Musk found to be planning a new, multinational bakery called “Cake-X”, Marie Antoinette and Oscar Wilde felt threatened. Their independent bakery would go out of business, so they poisoned the baby shower cake and Musk was the only one to have a slice! The crowd booed loudly at these jealous celebrities but were delighted to have their theories answered. Dominic O’Brien, Jack Delaney and Daniel O’Brien’s Murder Mystery was a roaring success. A complex plot and a hilarious host of characters made for a thoroughly enjoyable evening of crime-solving.