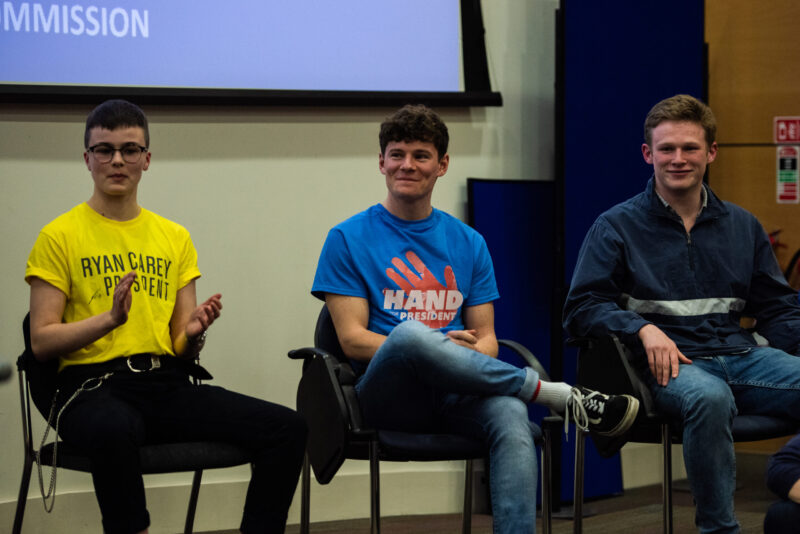 If the focus on inclusion and accessibility at tonight’s Trinity College Dublin Students’ Union (TCDSU) Council and Equality Hustings was unsurprising, then what was illuminating was the new avenues of debate that the topics opened up, between a set of candidates attempting to hone their campaign messages.

Indeed, one of the prime takeaways from the debate was the nebulous nature of social issues – and the way candidates chose to frame them spoke volumes at times about the way the union could be run next year.

While most candidates didn’t break out of the roles they’ve taken on in the race, probing questioning forced some to re-evaluate the terms of debate they’ve attempted to impose on the race.

If we learned anything from tonight’s presidential debate, it was that the micro/macro divide isn’t as straightforward as some candidates would like it to be – and the lines drawn between them may be more blurry than they’d have voters believe.

Williams, the race’s clear outlier, peaked on the first question this evening: on Irish language issues, at least, he seemed on safe footing. But for Williams, a hustings heavy on equality ended up creating more pitfalls than opportunities to set himself apart. While his lack of knowledge about Irish language rights in Northern Ireland benefited him when he claimed that Irish “is not a political issue”, he fell down when attempting to discuss issues – like racism, LGBTQ+ rights and far-right politics on campus – that don’t fit the local/national binary. Williams drew a gasp when he said he thinks racism is “not a massive problem on campus”.

While Carey impressed in parts with policy proposals that were often rich in detail, he’s at risk of falling victim to his own status as a TCDSU activist. While his manifesto emphasises his experience, most voters will likely see him as a candidate like what came before – and despite doing better on some questions than the other candidates, he didn’t do enough tonight to broaden his appeal to voters beyond seasoned council attendees.

Hand is emerging as a middle-ground candidate between Carey’s activist profile and Williams’s desire to solely focus on local issues, but he nailed his colours to the mast when the issue of USI membership arose. Hand went as far as to say talk of leaving USI is “dangerous”, and flagged USI’s rapid HIV testing – and its role in helping students facing issues like rent increases – as benefits of membership. Certainly, he and Carey made a black sheep of Williams, whose wish to withdraw the union from national politics will leave many students wondering what representation, if any, they would have at national level.

Williams ultimately blasted a union bubble he says most students don’t even know exists, while Carey risks becoming permanently locked inside it. Hand, a well-prepared candidate, could actually be the one to capture the middle ground of student opinion.

In her first real test of the campaign, O’Connor delivered a calm performance tonight, navigating tricky questions with relative ease – although her answers occasionally strayed into vagueness and rhetoric.

While O’Connor said she wants to strengthen the role of the Irish language within the union, her lack of vision in the area was evident. Despite saying she thinks we should implement Irish language policy and working groups, her upbeat demeanor didn’t quite disguise the vagueness of her pledges.

Perhaps unsurprisingly, a question from Twitter gave voice to the issue on everyone’s lips: what exactly is the buddy system? Clearly expecting the cynicism, O’Connor was assertive in her defence of a “really valuable” system. She was self-aware too, though, acknowledging the programme’s potential downfall. Candidly, she said that “it probably will not be hugely successful in its first year. It will be a long term project”.

Although O’Connor seemed caught off-guard by a question about how to tackle lecturers misgendering trans students and – rather fittingly – diverted the answer to Academic Registry, she outlined her hopes that her proposed equality training for lecturers will indirectly remedy the problem, and says she wants the union to be where “students can go to raise these issues”.

If she was patchy in parts, though, she was confident in other areas, and pushed her experience and passion for the role as she returned as her main selling points.“I really care about the role. I think these issues can be fixed. I really do believe that everything can be implemented, or at least started”, she said.

Leah Keogh gave an assured – if safe – display in familiar surroundings tonight. She did not deviate from her manifesto points when questioned, a tactic that served her well in a competent performance as she fleshed out points that may not have seen light yesterday at the Dining Hall Hustings.

While she reiterated the importance of her “cornerstone” manifesto point – tackling financial hardship amongst the student body – in her closing speech, Keogh also gave attention to the other aspects of her vision: she was particularly strong on issues of accessibility, for example, and promised to bring a new focus to issues affecting students with disabilities like Asperger’s and autism.

However, even when pushed to pick a campaign week she’d scrap, Keogh refrained from criticising the union’s current welfare structures. For a candidate who wants to bring in new anonymous accountability frameworks, her diplomacy was notable.

Mainly, though, Keogh’s performance allowed her to display her knowledge of the union’s structures, while also setting out her hopes to work with other communities in College. She cited various Union positions – the disability officer and Oifigeach na Gaeilge – as potential collaborators, along with QSoc.

Keogh covered her bases tonight, weaving her major manifesto points into each of the questions fielded. Keogh is emerging as a well-versed candidate for the position of welfare and equality. Despite running uncontested, her case for the position is strong, complete with fresh takes on issues that come up year on year.

Hiram Harrington and Philly Holmes have acknowledged their friendship throughout this campaign, and neither did much tonight to set themselves apart. It’s only day two of the campaign, but on tonight’s evidence, the candidates will need to deviate more from their manifesto points if they’re to capture votes.

This, though, seems to be the problem: both appear happy with manifestos strong on accessibility, and not terribly inclined to expand on their proposals. The pair will also have likely frustrated Gaeilgeoirí in the audience with a flippant focus on the Irish language that ultimately failed to convince.

Holmes will likely have earned plaudits for his read-aloud manifesto option – and he clearly knew it, peppering his answers with reference to the audio version. Harrington, for their part, was strong on the need for LGBTQ+ accessibility.

Despite the dual responsibility of the role of communications and marketing officer, neither candidate chose to dwell greatly on their marketing responsibilities. Although questioning on fundraising and advertising was scarce, neither Holmes nor Harrington had much to say on the topic when it arose.

Ultimately, the candidates were at times almost indistinguishable, though differences became apparent in closing speeches – Harrington’s was the more personal, while Holmes chose to expand again on his vision for the role. While neither candidate went too far wrong tonight, neither established themselves as a frontrunner.

Sole ents candidate Hugh McInerney was not thrown any surprises this evening, having largely escaped probing on contentious issues – like the much-maligned Trinity Ball lineup. Instead, the line of questioning was based mostly on accessibility.

Though McInerney spoke in rather vague terms about how he was going to address the “huge hunger” for Irish language events on campus, he was strong when discussing LGBTQ+ issues, and he was assured when speaking about the difficulties faced by transgender students in nightclubs.

McInerney, a charismatic candidate with perhaps a more homespun charm than previous candidates, displayed a remarkable enthusiasm for non-alcoholic events – and backed it up with both personal experience and policy proposals. This could set him apart from other ents officers, who have sometimes been accused of treating alcohol-free events as something of a box-ticking exercise.

McInerney, whose manifesto notably failed to mention the perennial issue of drug harm reduction, was solid on the issue tonight. He said he has met with Students for Sensible Drug Policy, and detailed plans for a recharge tent at Trinity Ball.

McInerney’s performance was short and sweet – he gave snappy, engaging responses to the fairly predictable questions he was faced with, and displayed a surprisingly comprehensive knowledge of issues not featured on his manifesto. He will do well not to slip into complacency, though, in the absence of tough questions.

Editor of The University Times

At a hustings heavy on issues of equality and inclusivity – and notably light on questions of finance and editorial policy – both were unstinting in their analysis of the paper’s shortcomings on accessibility.

Crawford, whose campaign so far has focused almost entirely on the need to improve the inclusivity of The University Times, said she wanted to create a “more accessible and friendly” paper – with alluring proposals on outreach and events. On accessibility, she offered to meet writers in the College’s new Disability Service building in Printing House Square. She also proposed having spoken-word pieces for people with visual impairment, and providing accessibility information for events in Radius.

Watson, the race’s more “conventional” candidate, didn’t hold back either, arguing that “in UT, the culture has to change” when it comes to making marginalised students feel welcome. Workshops, for Watson, are the key to improving the paper’s accessibility – a tenet he emphasised by drawing on his personal experience with an invisible disability. But Watson, who yesterday emphasised his experience, tonight took a more personal tack – both on the difficulty of dealing with an invisible disability and on his progression through various roles in the paper.

Tonight’s showdown will have offered a lot to potential voters looking for a more inclusive paper, but arguably less to members of the paper looking to hear about how the candidates will improve the quality of the paper’s output, or strengthen its financial position. It’ll be interesting to see how the candidates will respond when pushed on more conventionally journalistic, or editorial, plans.