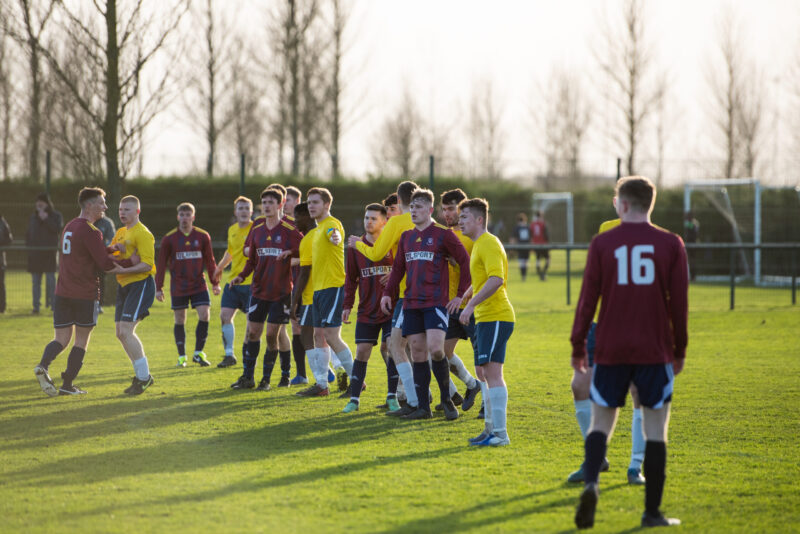 Dublin City University (DCU) booked a place in their first-ever Collingwood Cup final this afternoon, coming from behind to beat University of Limerick (UL) 5-1 at the AUL Complex.

The scoreline did ultimately flatter the Dublin side, who were made to work for the victory against a stubborn and stoic Limerick side. But two jaw-dropping strikes from Sean Cronin and David Mugalu, after UL’s defence tired towards the end, put the gloss on a victory that will have created a very happy Glasnevin campus.

The opening half-hour was tight and anxious. UL’s James O’Sullivan was the first person to do anything of note – but perhaps for all the wrong reasons. The striker made a rash challenge on DCU’s Tristan Hoffman by the touchline, seeing a yellow that could easily have been another colour.

Remarkably, the first shot of the game didn’t arrive until the 32rd minute, and the result was a goal for Limerick. Adam Foley, who scored a hat-trick against Maynooth yesterday, was allowed time and space to get his cross away on the right-hand side, and although DCU’s right-back Ryan Smith did all he could to head it to safety, it fell to Oleg Vysochan and the winger made no mistake to give UL the lead.

Conceding jolted the Dublin side into action, and they responded promptly, with a free-kick from lone striker Jack O’Connor that managed to catch both the wall and UL keeper Sean McCormack off guard before sneaking into the bottom right-hand corner.

O’Connor’s equaliser sparked a newfound confidence among his teammates. Sean Trimble came close after some trickery from McCarthy on the left-side, and after an extended period of pressure they had a second minutes before the break. A quick corner found captain Eric Whelan at the back post, and his header across goal found an unmarked O’Connor for an easy tap-in.

O’Connor could have bagged a hat-trick on the stroke of half-time, after fantastic route-one ball from Toth set him free of the defence. But the in-form striker couldn’t keep his shot down, and the gap stayed at one.

The second half started in a similar fashion to the first, with both teams anxious not to leave themselves exposed going forward. The first chance fell to UL in the 59th minute: Vysochan went close again, but the winger couldn’t direct his shot home this time.

UL came again, this time through Foley. Toth, however, managed to get down low to block his shot, and DCU emerged unscathed.

On 75 minutes, DCU were almost in again. O’Connor latched onto a brilliant ball from Aaron Connolly, beating his defender for pace and failing to find the target courtesy of an overhit lob attempt.A more deft connection would have done the job.

If DCU looked largely comfortable, though, they almost lost their lead in dramatic fashion. A low driven cross from UL’s Alan Whelan forced DCU’s Eric Whelan to stretch out his foot, but the power of the cross saw the ball ricochet off Whelan’s foot and straight towards goal. Toth, though, was on hand to save his skipper the embarrassment, diving low to prevent an own goal.

DCU made the Limerick side rue their bad luck moments later, when Sean Cronin coolly converted from the D after Connolly recycled another O’Connor miss in front of goal. Predictably, the DCU bench erupted.

And it wasn’t long before DCU had a fourth, with a legless and loose Limerick caught off guard once again. This time it was the substitute Mugalu who netted, finding the top left-hand corner in spectacular fashion.

With virtually the last kick of the game, DCU got a fifth – and what a goal it was. Toth booted long up, towards his attackers, and Cronin connected beautifully on the bounce to lash home a 30-yard screamer.

The final goal capped a remarkable performance from DCU – and killed off a tired and resigned Limerick side, who couldn’t replicate the ruthlessness that brought them so much joy against Maynooth yesterday. DCU will face Ulster University in the Collingwood Cup final tomorrow evening in Dalymount Park. After a tournament full of upsets, it’s anyone’s game.