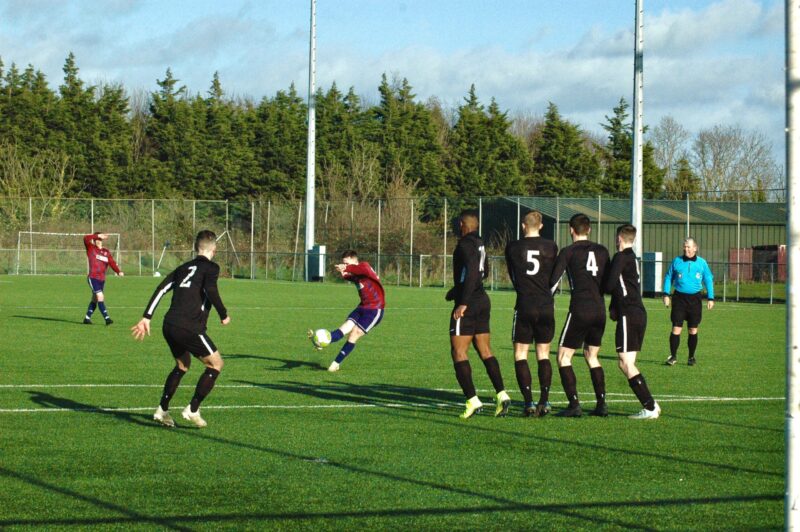 The University of Limerick (UL) saw off a second-half fightback to dispatch Maynooth University 3-1 in their Collingwood Cup quarter-final clash at the AUL Complex this afternoon.

In the sides’ third meeting in as many years in the Collingwood, UL dominated for large periods of the match but had to weather a resurgent Maynooth second-half display, inspired by Sven Biasamba, to claim victory.

The Munster side set the pace in bitingly cold conditions: holding possession well, Ed O’Dwyer won a free-kick in a promising position five minutes into the match. Adam Foley stepped up to take aim – his dipping shot swerved around the wall before nestling in the bottom corner of Colm Feeney’s net to make it 1-0.

Maynooth looked to respond, with Success Edogun and Eoin O’Neill linking up in an effort to force an opening. Their positive play won two corners, but poor deliveries into the area let UL off the hook.

UL regained control of the match and consistently looked dangerous in the final third. Maynooth’s Abdulrazak Tajudeen was lucky to only come away with a yellow card when, after losing possession in midfield, he caught Colm Barrett with both feet as he slid over the ball.

UL had the ball in the net again after 30 minutes of play, when good pressing from Adam Murphy forced Dylan Pierce to misplace a backpass to his goalkeeper, and saw the ball trickle into the open goal. But the referee saved the left-back’s blushes – he had already blown for a free out to the Kildare side.

Play went back and forth as the first half wore on. Maynooth captain Cillian Duffy was heavily involved in a number of offensive moves, the best of which led to a goalmouth scramble in the UL area. The ball finally fell to Tajudeen, but his scuffed shot was wayward.

Maynooth suffered a decisive blow on the stroke of half-time. Their defence had looked shaky at the best of times in the first period, and a lapse in concentration allowed Foley to capitalise. The ball slipped through the backline when neither of the Maynooth fullbacks came across to cut the pass out, and Foley was on hand to slip the ball past Feeney and double his side’s lead.

The second half was only a couple minutes old when Foley completed his hat-trick, stretching UL’s lead to three after he made space to shoot in the Maynooth area.

If the game now looked out of sight, UL – last year’s runners-up – showed no signs of slowing down. A beautiful turn from O’Dwyer created an opening to strike on the 18-yard line, but his shot pinged off the crossbar before going over. 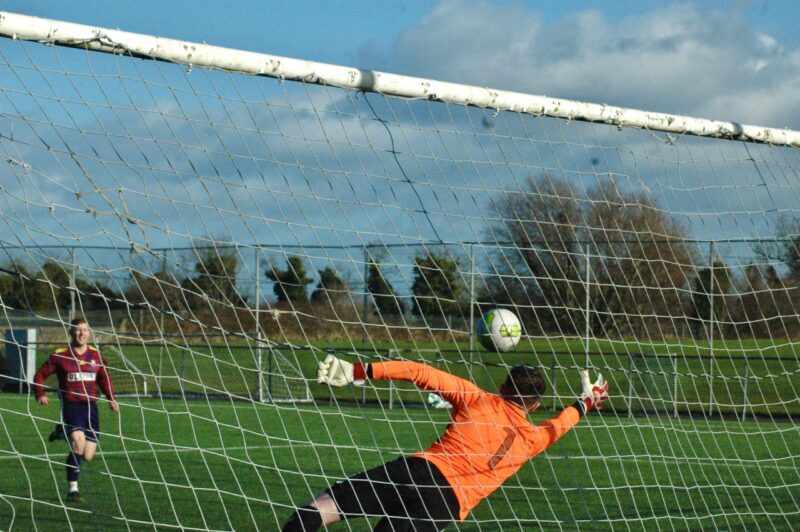 UL raced into a three-goal lead and never looked in danger of losing.

Maynooth were suffering from a lack of creativity in the final third, with their attackers constantly resorting to running at the UL defence before being caught in possession. Their backline struggled to contain UL’s, with the Limerick side’s rehearsed set-piece moves mounting the pressure on the Kildare university.

The introduction of Biasamba from the bench heralded a pointed change in Maynooth’s attacking approach. He created a number of problems for the UL defence, getting two shots off and winning a corner directly after his introduction.

With 70 minutes played, Maynooth were handed a lifeline. A Duffy freekick landed the ball in six-yard box, and a scramble for possession ensued. Sean McCormack in the UL goal failed to secure the ball when he dived for it, and it was knicked away from his grasp and into the net. UL’s protests fell on deaf ears, and the deficit was reduced to two.

UL began to sweat – the change in mood on the sideline was palpable. Biasamba was at the centre of the action again when he controlled the ball on his chest, before striking on the volley. His vicious shot whistled just wide.

Maynooth’s pressure paid off again: with 15 minutes to go, the referee blew for a penalty. A deft flick from Biasamba left the UL defence flat-footed, before Padraig Finnerty was taken down after latching onto the pass.

To Maynooth’s despair, however, Duffy’s powerful penalty ricocheted off the upright, leaving UL to count their blessings.

The penalty scare was enough to jolt UL out of their lull: they regained a foothold as the clock ran down, and Maynooth were only capable of a handful of speculative efforts in the dying moments.

In the end, Maynooth just did not have the resources to stage a comeback. The full-time whistle blew at 3-1, confirming UL’s semi-final matchup against Dublin City University.

Speaking to The University Times after the game, UL head coach Mike McCarthy praised his side’s clinical display: “It’s always going to be a tough game. We were lucky in the first half, [we] got a couple of breaks from some defensive mistakes from them, but we still had to capitalise and we did.”

Maynooth exit the Collingwood as a result of their loss and will now face University College Dublin in the Farquhar Cup.