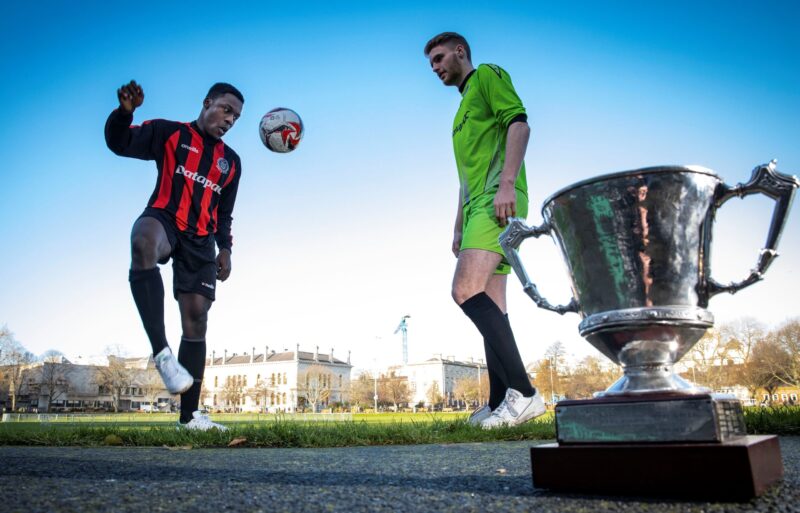 The Collingwood Cup kicks off tomorrow afternoon, with the curtain-raiser – in College Park tomorrow at noon – seeing Dublin University Association Football Club (DUAFC) take on holders University College Cork (UCC). Between Monday and Wednesday the sides will battle it out for a berth in the tournament’s final, which will take place in Dalymount Park on Wednesday evening. Here’s how we think it’ll go.

The draw for the quarter-finals of the Collingwood Cup produced a number of eye-catching matchups, and this Ulster derby is no exception.

Ulster University’s (UU) Thomas Maguire describes the game as a “massive rivalry”, and the two sides have already met this season in the Colleges and Universities Football League (CUFL). Then, UU were dominant in a 6-1 trouncing of their close neighbours. With this in mind, Queen’s chairperson Denis Clark notes that his side are going into the cup “in hope rather than expectation”.

Despite this, UU won’t consider a semi-final place as a given. With many of their players having to juggle commitments to Northern Ireland Football League clubs, both Championship and Premiership, it’s possible that UU will field an under-strength team next week. Maguire – who came off the bench to score in the final of the Co Antrim Shield for Cliftonville last week – admits that “all the lads love playing for the uni, but club football does take preference for most lads”.

While the Queen’s panel also has a handful of players signed to Premiership clubs, they will not suffer to the same extent as their rivals. This sets the match up to be a close encounter.

DUAFC will have their work cut for them in the curtain-raiser at College Park.

Their first opponents are cup-holders UCC, who enter the competition as one of the most successful Collingwood teams of the past decade, having won outright in 2011, 2015, 2017 and 2019. The team has been a breeding ground for talent over the past 10 years: Sean McLoughlin and Sean O’Mahony, who starred for UCC in past Collingwoods, now play for Hull City and Cork City respectively. Current talent includes ex-Brighton youth player Rian O’Sullivan.

Despite this, UCC head coach Noel Healy maintains that next Monday’s fixture is anyone’s game: “I think that there’s two different types of pressure on two different teams. One, the host team, there’s pressure in that … we’re going in as cup holders. We experienced it after winning it 2017, we went to Queens in 2018 and we lost.”

DUAFC captain Jason Boateng is out to prove doubters wrong in the opener: “I feel like soccer in Trinity is really looked down upon. I feel like every year we’re trying to counter that and try to go one step further.”

With various external factors at play, expect a wide open match. While UCC look the safe bet on paper, Trinity may be capable of an upset.

Maynooth University and University of Limerick (UL) are no strangers to each other: this will be their third meeting in the Collingwood in as many years. Maynooth dispatched of UL at the playoff stage in 2018, while UL were 3-1 winners when they met in the quarter-finals last season.

UL, last year’s hosts and runners-up, have seen a number of key players move on from the squad, including former and current League of Ireland players – head coach Mike McCarthy notes that “we will be very different to the way we were last year”. McCarthy is confident the culture that has been fostered around UL football club will allow younger squad members to excel this year, however: “They’re good enough, and they’ve shown they’re good enough.”

Maynooth have enjoyed a successful season so far, having booked a place in the quarter-finals of the CUFL. Although it would be unwise to use league performance as a barometer, Maynooth will be quietly confident – especially given the fact UL are facing a relegation play-off next month. Barry Prenderville, the university’s soccer development officer, knows what to expect from their opponents: “We expect a hard game. We always have a hard game against UL … I don’t think there’s any easy games in this Collingwood Cup.”

It will be a tight affair when these familiar foes meet on Monday, but if Maynooth can reproduce their league form, they could edge it.

The Northside takes on the Southside in this classic match-up. University College Dublin (UCD) came out on top earlier this season in the CUFL, making light work of Dublin City University (DCU) in a 7-0 victory.

UCD are rebuilding their squad this year: last season was the end of an era, with the likes of Shamrock Rovers’ Gary O’Neill and Cork City’s Dáire O’Connor leaving the university after a very successful stint with the team.

Diarmuid McNally, the club’s director of football, has faith in the young team representing the university in the Collingwood this year. He has every reason to – seven Collingwood squad members won the Harding Cup earlier this season: “It’s one of our youngest teams we’ve had in a while, but one that certainly could have success, maybe not this year, but certainly over the next year – if not this year.”

DCU are in a similar position as their cross-city rivals, in that they are also rebuilding their squad. They’ve enjoyed less success than UCD, however: a miserable CUFL campaign saw the side concede 18 goals and score just one.

If their league form is anything to go by, DCU could be in for a hiding. Yet, as McNally points out, “anything can happen” in a Collingwood quarter-final.