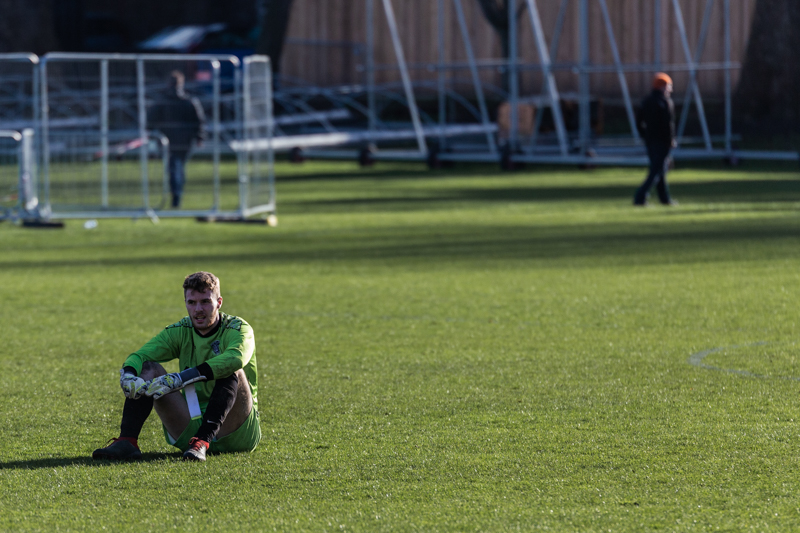 DUAFC keeper Dan Grace sits dejected after his side lose out 3-1 to UCC in College Park.
Alex Connolly for The University Times

The opening day of the Collingwood Cup saw thrills, spills and one particularly drab encounter between Ulster’s finest footballers. Here’s a round-up of the most important action from day one of the 2020 Collingwood Cup in Trinity.

A drab 0-0 affair between the Ulster rivals had to be settled by penalties, with Ulster University (UU) emerging 4-3 winners over Queen’s.

The best chance of the game came in the opening five minutes, when the rebound from Ulster’s Ronan Wilson’s shot fell to Nedas Maciulaitis, but his attempt was denied by the post.

A second yellow card for UU captain Marc McKenna midway through the second half spelled trouble for the side, but Queen’s were unable to capitalise on their numerical advantage.

Mattew McClurg was the hero in the shoot-out, saving Josh Curry’s spot kick to give his side the advantage. Owen McConville took the decisive kick, setting up a semi-final clash with holders University College Cork (UCC) tomorrow afternoon.

In a game that was open and frantic, UCC – the 2019 Collingwood Cup champions – survived a spirited Trinity display to win 3-1 this afternoon in College Park.

Trinity took an improbable lead early on when Darragh McGee stretched to guide the ball past Cork keeper Arthur Nganou.

DUAFC’s lead was short-lived, however, and Dave Dalton was able to equalise with a curling finish off an Owen Collins assist.

UCC were revitalised after the break, and in a fashion more akin to cup-holders, were able take the lead through Ronan Hennessey.

A superb display from Dan Grace in the Trinity goal ensured that Trinity stayed in the tie until the bitter end. However, Collins put the game to bed on 76 minutes, leaving the hosts with too much to do.

UCC march on in their defence of the cup, with a clash against UU tomorrow, while Trinity will tomorrow play in the Farquhar Cup semi-final against Queen’s.

UL dominated proceedings early in the match, and were off the mark after only six minutes of play: Adam Foley’s sweetly struck free kick nestled in the back of Maynooth net to deservedly put the Munster men ahead.

Foley was on hand to stretch the lead to two before half-time, when a mixup in the Maynooth backline allowed him to slide the ball past Colm Feeney. Another from Foley after the break left UL three goals to the good and cruising.

Maynooth threatened to stage an improbable comeback, after UL failed to deal with a loose ball in the six-yard box and the Kildare side pulled one back. Padraig Finnerty won a penalty for Maynooth soon after, but Cillian Duffy’s attempt was denied by the crossbar.

UL managed to see the game out after Maynooth’s period of dominance in the second half, earning themselves a place in tomorrow’s semi-final.

Dublin City University (DCU) progressed to the semi-finals of the Collingwood Cup after beating University College Dublin (UCD) 4-3 on penalties.

Despite being by far the more dominant side, UCD failed to capitalise on their spells of possession and were ultimately punished by a resilient DCU side who were unflinching up front.

In a match that had everything, DCU earned themselves an unlikely lead at half time, after winger Sean Trimble scored against the run of play. Jack O’Connor then made it 2-0 on the hour mark.

UCD’s consistent pressure finally broke the DCU defence with two goals in the last 10 minutes from Yousuf Mahdy and Colm Whelan, sending the tie to penalties. DCU rectified their performance, coming out on top 4-3 on penalties. Captain Sean Cronin scored the decisive penalty.