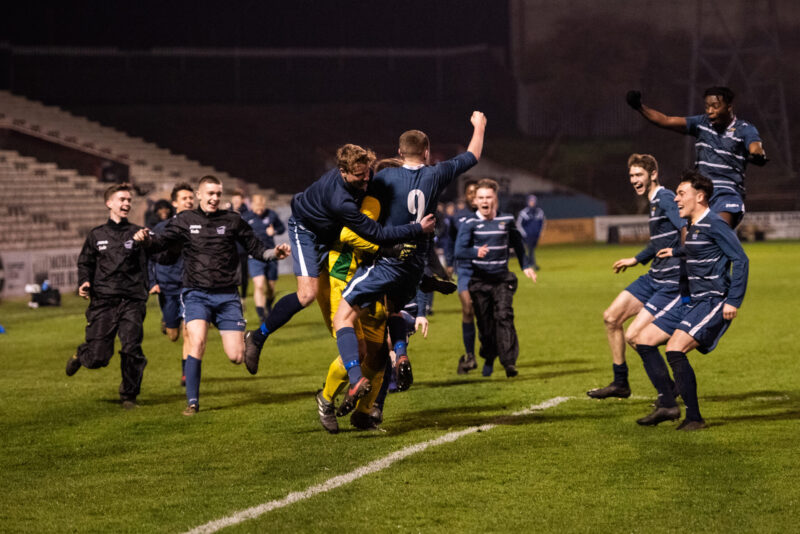 DCU celebrate after clinching victory in the final of the Collingwood Cup.
Alex Connolly for The University Times

After three days of non-stop action, all is quiet around College Park as the dust settles on the 2020 Collingwood Cup. On the 100th anniversary of the competition’s inception, the quality on show was fitting of such an occasion. Here’s a look back on what happened on finals day.

Dublin City University (DCU) triumphed over Ulster University (UU) at Dalymount Park this evening, claiming silverware in the Collingwood Cup for the first time in the 100 years of the competition’s existence. After 110 minutes of football ended scoreless, DCU dispatched their opponents in a penalty shoot-out, coming out on top 4-1.

The match began frantically, with both sides proving their worth by displaying some excellent passing moves. UU in particular started the match brightly: Ronan Wilson was key as the Ulstermen went in search of an opening goal.

DCU grew into the match, however, and right before half-time they had the best chance of the tie: striker Jack O’Connor had the goal at his mercy after he had rounded UU goalkeeper Matty McClurg. The former was ready to wheel away in celebrate after he shot towards the empty net, but a mammoth effort from Owen McConville denied the DCU forward with his goal-line clearance.

The match would not see another chance as good. Both teams played out a ropey second half, and exhaustion had set in when 20 minutes of extra time were added on.

In the shoot-out, DCU immediately gained the upper hand when two UU players sent their spot kicks over Imrich Toth’s goal. O’Connor, fittingly, took the penalty that sealed the win for DCU.

After defeating the likes of University College Dublin and a strong University of Limerick side, DCU are worthy winners of a thoroughly enjoyable Collingwood Cup.

Dublin University Association Football Club (DUAFC) claimed their first silverware of the season in dramatic fashion, overcoming a Maynooth side that refused to lie down this afternoon in College Park to win the Farquhar Cup. After a sensational match that ended 3-3 in normal time, Trinity claimed victory after winning 8-7 in a penalty shoot-out.

Maynooth were effective on the break in the early period of the match, and their explosiveness was rewarded after 30 minutes: Callum Worfield met Aaron McNally’s delivery to head home and give the Kildare side the lead. 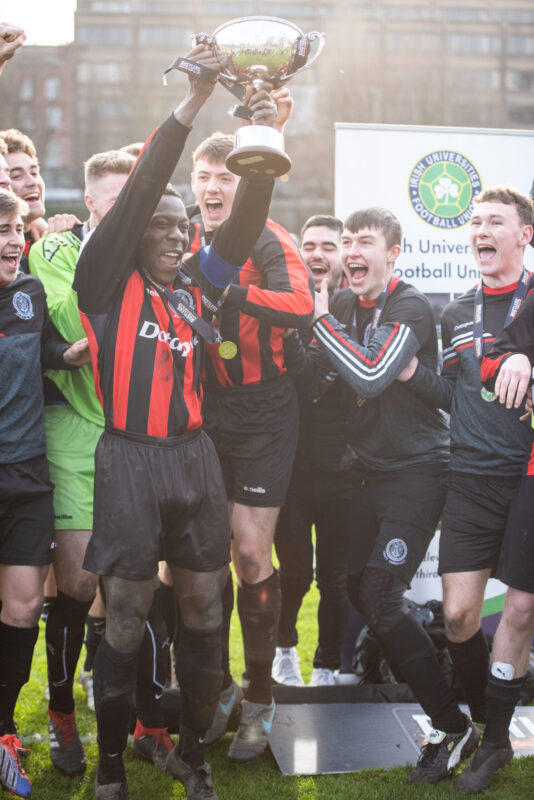 DUAFC captain Jason Boateng celebrates with his side after winning the Farquhar Cup in College Park.
Alex Connolly for The University Times

The lead didn’t last long. James Woods was the key man for Trinity today, and he was heavily involved in their two goals before half-time: he assisted Dylan Connolly in scoring his second in as many days, before he had one of his own when he whipped one into the bottom corner of Mal Doyle’s net.

Woods had his third from a free kick right after the break: a wicked deflection off the wall allowed Woods to complete his brace.

Only a foolish man would have written Maynooth off. Sure enough, a well-taken goal from Ral Tajudeen, and a horrific defensive mix-up that allowed Cillian Duffy to score at the death, forced the match to penalties.

What ensued was an exhibition in penalty-taking until, with the score tied at 7-7, Dan Grace managed to save his opposite number Doyle’s penalty, leaving Stephan Duran with it all to do. He stroked home confidently, clinching the Farquhar Cup for the hosts.