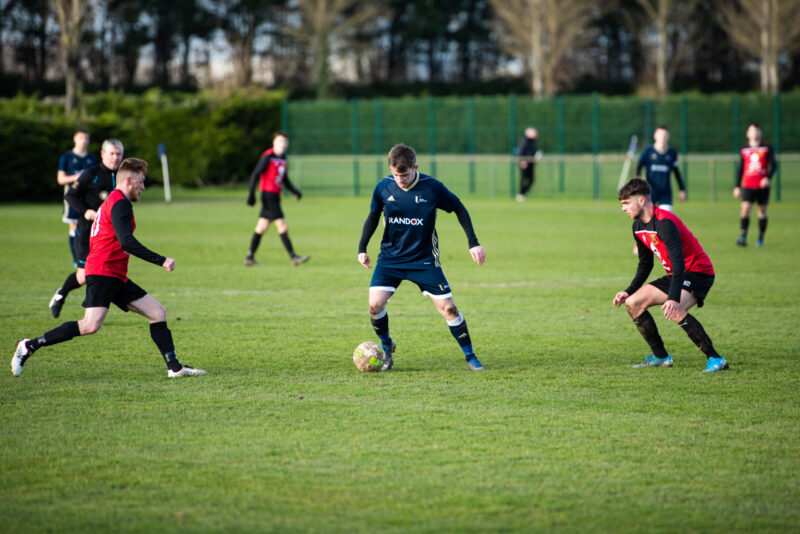 After a dramatic opening day of the 2020 Collingwood Cup – featuring two penalty shootouts – the second day of the tournament had a good deal to live up to. And it delivered a number of cracking encounters, on a day that saw Dublin University Association Football Club (DUAFC) bounce back from yesterday’s defeat with a dramatic win on penalties over Queen’s University Belfast.

Dublin City University (DCU) are through to their first Collingwood Cup final after seeing off the University of Limerick (UL) 5-1 with a stunning performance at the AUL Complex.

The game had been crying out for a goal after a slightly drab and tense display in the first half-hour. Limerick took the lead after 32 minutes, when Oleg Vysochan latched onto a cross to bury it past Imrich Toth.

Conceding, though, only served to galvanise the Dublin side, and they hit back quickly with a goal of their own. Jack O’Connor struck a coy free kick to equalise. He had a second seven minutes later, after a well-worked corner found the striker free for a tap-in.

Limerick came out fighting in the second half, but ultimately tired themselves out with some ponderous build-up play. This allowed DCU to run riot in the final 10 minutes, and Sean Cronin got DCU’s third with a composed finish from just outside the box. Substitute David Mugalu connected beautifully for DCU’s fourth after running on to a delightful through ball. Mugalu’s clinical finish was outdone moments later, when Sean Cronin rocketed home a 30-yard screamer.

DCU have played fluid football throughout this cup championship, and look like the team to beat. They will face Ulster University in the final of the Collingwood Cup tomorrow in Dalymount Park.

A gutsy display from Ulster University (UU) saw the northerners scupper University College Cork’s (UCC) hopes of retaining the Collingwood Cup today at the AUL Complex. A 2-1 victory for UU was enough to book them a place in the final.

In a game that was often frenetic in pace and feisty in nature, Nathan Best struck early and low to give UU a lead after two minutes. Matthew McKevitt was able to pull one back for the Leesiders after 15 minutes, however, putting the match back in the balance.

The decisive moment came when Niall McGinley was left unmarked from a corner kick. The midfielder rose to meet the cross and found the net with his head on 65 minutes.

UCC searched desperately for an equaliser, but they could not come up with the answers. UU held fast and, led by captain Craig Taylor, got to the finish-line with a 2-1 win.

UU will now head into the final tomorrow on a high. Having dispatched the reigning champions, UU are 90 minutes from glory. They take on DCU tomorrow.

Dylan Connolly was the star man for Dublin University Association Football Club (DUAFC), as the Collingwood hosts advanced to the final of the Farquhar Cup following a win on penalties over Queen’s University Belfast. The match had ended 1-1 in normal time.

Queen’s opened the scoring with a route-one goal: Lorcan McIlroy latched onto a long ball before striking low to beat Dan Grace in the Trinity goal.

Trinity – deservedly – pulled themselves back into the match, when Connolly struck superbly on the volley to rifle in an equaliser from long-range.

The match wore on with Trinity on top, but simultaneously unable to break their opponents down.

The match went to penalties, where the deciding spot kick fell to goal-scorer Connolly. The winger struck confidently to put Trinity through to the Farquhar Cup final in a 4-3 win.

DUAFC face Maynooth University tomorrow in College Park for a chance to claim their first silverware of the season.