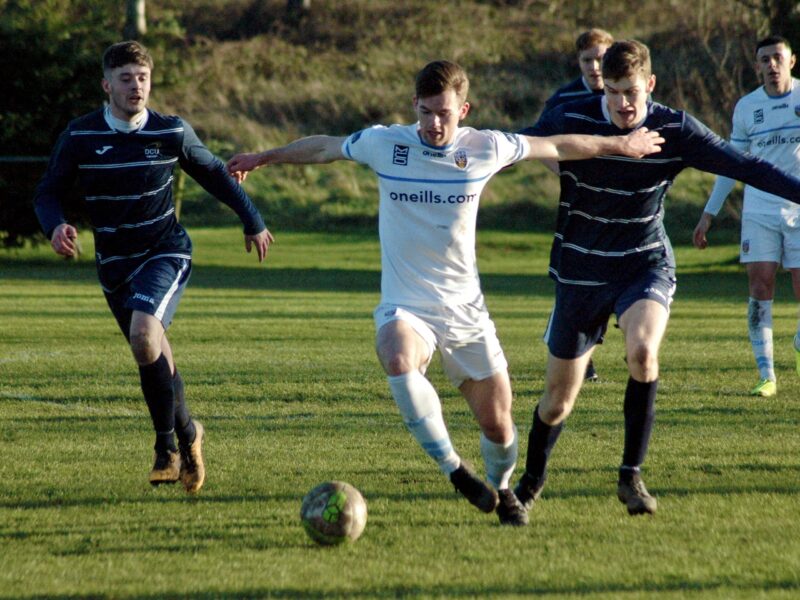 Dublin City University (DCU) pulled off a cup upset against University College Dublin (UCD) in the quarter-final of the Collingwood Cup at the AUL Complex today, beating their south-side rivals 4-3 on penalties after the match finished 2-2 in normal time.

In a fiercely competitive game, DCU grabbed two goals against the run of play and defended doggedly against a relentless and physically more robust UCD side.

In dramatic fashion, UCD managed to recover, reversing the two-goal deficit in the last 10 minutes to force the tie to go to penalties. DCU eventually won the shootout 4-3 to top off a magical opening day of cup football.

The first chance fell UCD’s way in the fifth minute. A delightful ball played over the top from right back Evan Farrell found winger Ciaran Bryan, who caught it sweetly on the bounce. DCU’s keeper Imrich Toth was equal to it, however.

Hungry to open the scoring, UCD’s waves of attacks were constant. In the 8th minute, Aron Barbikar almost opened UCD’s account with a bullet header off a Bryan corner. Barbikar used his height advantage to tower above the DCU defence, but his attempt went just over the bar.

DCU had to wait until the 20th minute to conjure up their first chance. Central midfielder Sean Cronin was allowed time and space to shoot from 25 yards out. Cronin went for placement over power, and his finessed shot was easily gathered by UCD keeper Lorcan Healy. If DCU were to leave a mark on the game, chances like Cronin’s would have to be taken.

Against the run of play, DCU took the lead just two minutes later. Midfielder Aaron Connolly whipped in a dangerously dipping ball into the box. The ball found Sean Trimble, who managed to fumble the ball out of his feet and toe-poke into the bottom corner. It was scrappy, but DCU were in no way fussed.

UCD tried to hit back quickly. Bryan again came close with another venomous shot sliced across goal, but keeper Toth was again up to the task.

Despite UCD’s immense pressure throughout the game, DCU defended compactly. As the half went on, DCU grew in confidence. On the half hour mark, lone-striker Jack O’Connor cut into the box. He managed to fake two shot attempts and beat UCD’s central defensive pairing, but his shot pulled wide.

DCU could have doubled their lead just before half-time. A crossed free-kick found goal-scorer Trimble on the far right-hand side. Unselfishly, Trimble squared it to Eric Whelan on the five-yard box, but he skied it high over the bar.

The second half brought an elevated sense of urgency from UCD. Jack Keaney tested Toth once again from a 30 yard free kick. The skipper’s shot was on target, but Toth was able to acrobatically parry it away. The resulting corner saw UCD’s Yousuf Mahdy jump tallest, but his cushioned header sailed over the bar.

DCU’s doggedness was ultimately rewarded on the hour-mark. A well-intercepted pass from Tristan Hoffman set up a counter attack. Jack O’Connor retrieved the ball in the middle of the park. With Barbikar thundering up behind him, O’Connor managed to pirouette his body with the flight of the ball and escape the centre-back. Charging towards goal, O’Connor – who had a lot to do once he cut in to the box – slotted home from a tight angle, sparking jubilant scenes on the DCU bench.

Chasing the game, UCD needed some luck as a stoic DCU defence continued to scupper their attacks. Substitute Michael O’Keane stretched to reach a wayward cross from Mark Gordan, but once again Imrich Toth shut up shop with a stunning dive.

UCD finally got their goal on the 80th minute mark. A tired DCU defence couldn’t hold off the meandering run of Evan Farell into the box. He passed it off to Yoyo Mahady, who made sure of the finish.

In the dying moments of the game, UCD got their equaliser, having thrown the kitchen sink at the DCU defence for 10 minutes. UCD – who had been playing intricate and swivelling passes in and around the box the whole game – reverted to the less sophisticated long-ball method. Left-back Mark Digwam lobbed one in hopefully, and Colm Whelan managed to wrap around his foot around the ball as it emerged from a goalmouth scramble.

With the sides all-square at 2-2, the match would be decided on penalties. Both team’s first penalties were saved: Jack Keaney went first and his shot to the low right-hand corner was saved by Toth. Lorcan Healy though came to spare his captain’s embarrassment with a fine save of his own. Not long from scoring, UCD’s Colm Whelan emphatically dispatched his penalty. DCU’s Connolly then stepped up and sent the keeper the wrong way to make it 1-1. UCD’s next penalty was then saved yet again by Toth. Winger Sean McCarthy then converted the proceeding to penalty to make it advantage DCU. With two more comfortably slotted home, the all important kick came down to captain Sean Cronin. Cronin sunk it into the back of the net to send DCU into the semi-final.

Overall the shift the DCU defence put in and their ruthlessness up front made the north-side team deserving winners. Now they face the University of Limerick in the semi-final tomorrow in the AUL complex.