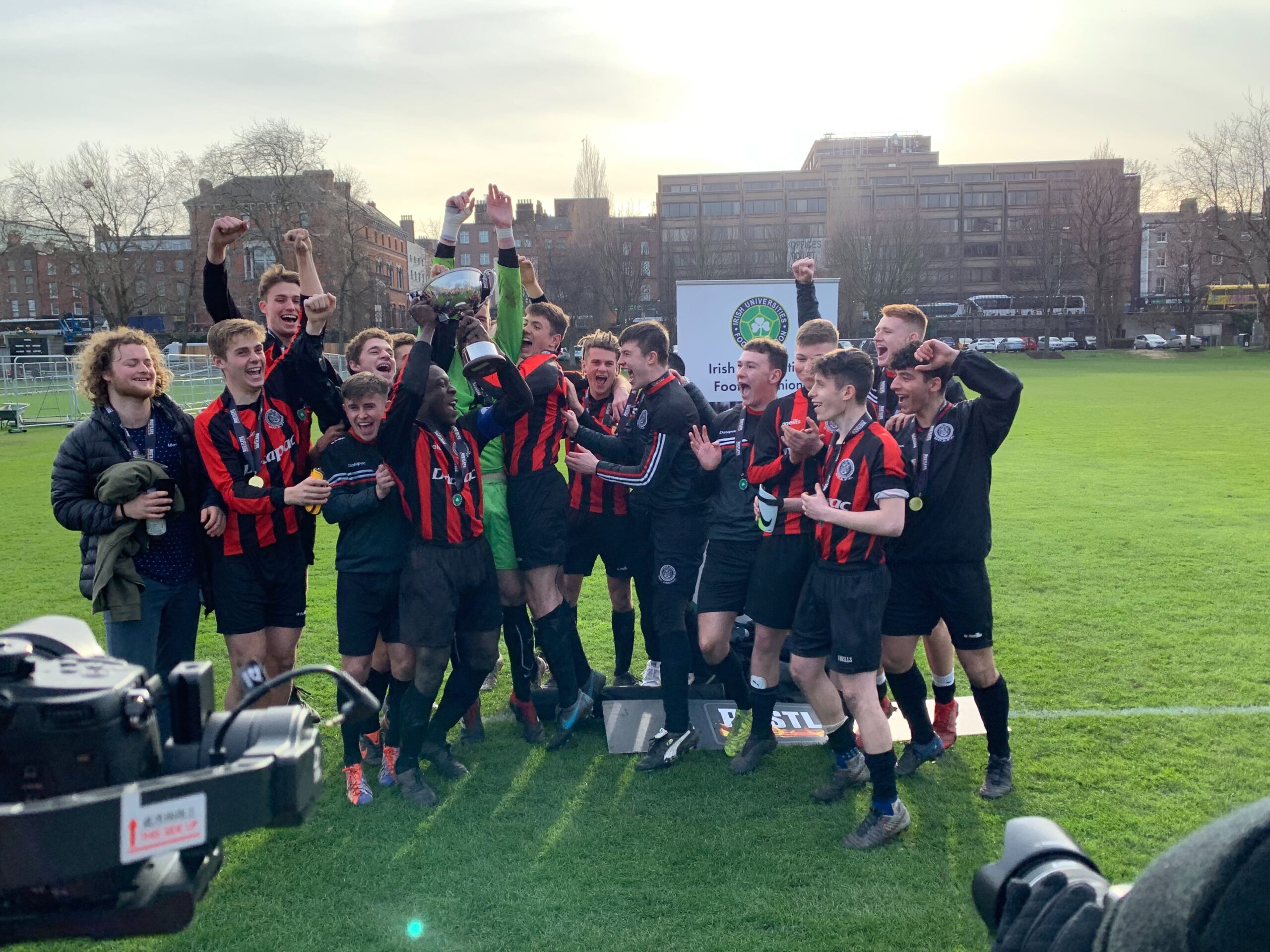 The crowd that flocked to the College Park sidelines in search of drama got what they were after in the final of the Collingwood Cup’s plate competition. The sun-drenched pitch was the site of endless drama in a game that seemed to turn every which way.

The game began with Trinity sitting deep and hitting Maynooth on the break – with varying levels of success. While James Woods was getting some joy out of the Maynooth centre-halves, Trinity paid the price for sacrificing possession as Callum Worfield latched on to an Aaron McNally cross to give the visitors the lead. Trinity continued to probe but a lack of quality in the final third meant they remained frustrated.

Woods looked the liveliest man in red and black and his delivery from a wide free-kick gave Trinity parity just before half-time. Maynooth were napping at the back post and Dylan Connolly smuggled in his second goal in as many days. Moments later Trinity had an improbable lead, when Woods jinked past two defenders and whipped an unstoppable shot into the bottom corner. It was a quick one-two blow from Trinity and Maynooth were sent to their corner dazed and confused at the break.

The first goal of the second half seemed of paramount importance in dictating the direction of the tie, and Trinity got it – thanks to a huge slice of luck. The indomitable Jason Boateng scrapped his way to a free-kick on the edge of the Maynooth area, and Woods’s effort took a huge deflection to loop over the head of Mal Doyle in the Maynooth goal.

After conceding three quick-fire goals it was sink or swim for Maynooth. They enjoyed plenty of possession but lacked a cutting edge – that was, until Ral Tatudeen showed some fleet-footed skill in the DUAFC box to beat two defenders and smash a wonderful solo effort home. A grandstand finish was coming.
A tired Trinity rearguard defended admirably and were aided by the respite that substitute Niall Carruthers offered at the other end of the pitch. His silky skills had the crowd swooning and he won some valuable free-kicks that allowed Trinity to breathe. 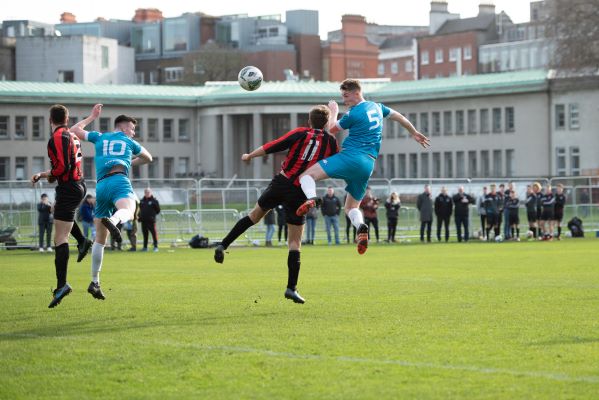 James Woods was Trinity’s star man with an assist and two goals.
Alex Connolly for The University Times

Just when Maynooth seemed to be out of ideas, and with just moments on the clock, a horrific mix-up at the back consigned Trinity to a penalty shootout. Sven Biasamba was played in behind the defence but saw his shot saved by the impressive Dan Grace. The rebound fell to Cillian Duffy, whose scuffed effort somehow managed to squeeze between the post and the covering defenders. Time seemed to stand still as the ball slithered into the net. The 2020 Farquhar Cup would be decided by a penalty shootout.

When goalkeeper Dan Grace missed DUAFC’s first penalty, heartbreak seemed to be written on the walls. Grace, though, rewrote the script with a save from Eoin O’Neill that kept Trinity alive in the shootout. Sudden death was anything but sudden, as both teams scored four consecutive penalties to tie the shootout at 7-7. Pressure breaks pipes and, after Grace saved his opposite number Mal Doyle’s penalty, Stephen Duran stroked home the winning spot kick. Trinity had won the most dramatic of finals.

Speaking to The University Times after the game, keeper Grace offered his assessment of the game: “We were against the run of play for a lot of it but as soon as we got two quick goals the game was on our terms then. Two sloppy goals to give away, especially in the last few minutes but glad to win something in College Park – the lads are all chuffed.”

Head Coach Richie Doyle praised his team’s effort and composure: “I thought we deserved to win the game in normal time. They showed great commitment and determination and desire and in the end they showed sensational composure and they kept their cool when it counted. It’s a great achievement.”

Terry McCauley, the president of the Irish Universities Football Union alongside former DUAFC striker and Irish International Rugby Union fullback Hugo MacNeill, presented the medals and handed off the Farquhar Cup to Jason Boateng, who jubilantly hoisted it into the Dublin skyline.