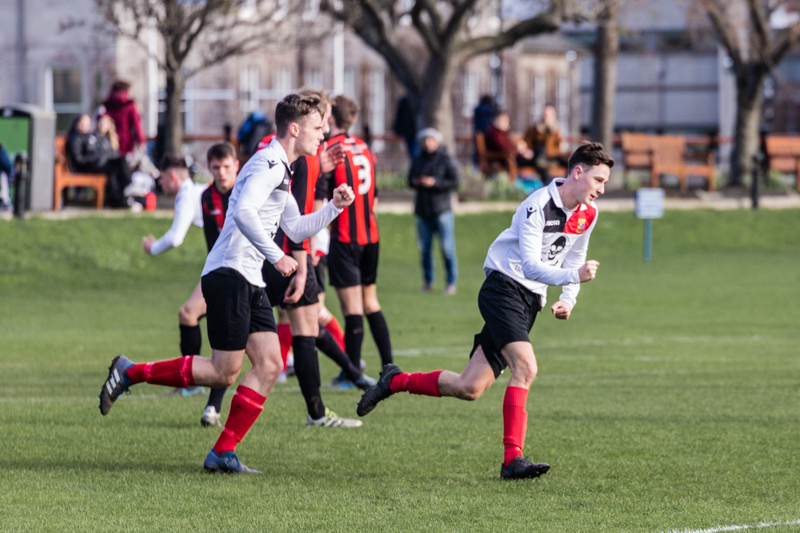 Dublin University Association Football Club (DUAFC) fell to a 3-1 defeat to University College Cork (UCC) this afternoon in a much-anticipated Collingwood Cup quarter-final. Trinity ultimately came up short in freezing College Park sunshine against a UCC side who came into the tournament as defending champions, and exited the tournament despite a spirited effort and several chances that could have turned the game at various stages.

If UCC came into the tie as favourites, though, it wasn’t immediately reflected in the on-field action. The first half was very even, if short on quality, with neither side taking the game by the scruff of the neck. Both were careless in possession, and when the hosts hit the front it was in scrappy fashion: Darragh McGee latched onto a scuffed Stirlans Spower effort and poked past Arthur Nganou in the UCC goal. An upset was momentarily on the cards.

But Trinity were not allowed to settle into any rhythm after taking the lead, with UCC swiftly drawing level. A whipped corner, only half-cleared by DUAFC, allowed Owen Collins to square the ball to Dave Dalton, and the attacker made no mistake with his finish, curling it into the bottom corner.

So the first half came to a close with the game in the balance at 1-1 – but it was second-half performances that came to define the tie. 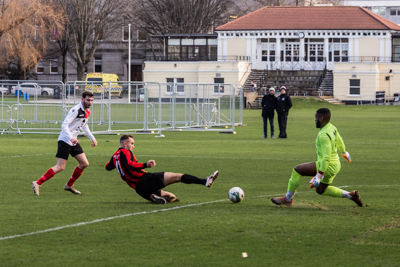 Darragh McGee poked Trinity into the lead just before the 20-minute mark.

UCC came out reborn. Passes that hadn’t stuck in the first half were suddenly finding white shirts, and they immediately gained the upper hand in the centre of the park. They were superb down the right, carving DUAFC up time and time again, and it’s not an exaggeration to suggest they could have had three or four in the opening quarter-hour of the second period.

That they didn’t was largely down to Dan Grace in the Trinity goal. The keeper was in inspired form, leaping high and low and coming up with answers to everything UCC threw his way – which was a lot. Dalton had a slew of chances, Collins too, but still the scores stayed level.

Eventually, though, the pressure had to tell, and with just over 20 minutes remaining Dalton raced down the right and stood up an inviting cross. Ronan Hennessey, totally unmarked in the box, had the simplest of tasks to nod past Grace.

How it Happened
Relive all the action with our updates from today’s game.

It was a deserved lead on the balance of play, and Trinity could have few complaints. But cup football is cup football, and the hosts almost found themselves on level terms when a curling free-kick from James Woods forced a fingertip save out of Arthur Nganou.

UCC, who had looked so dominant just moments earlier, were suddenly under pressure themselves, with Rory Nairn causing problems. But Trinity were desperate for an equaliser and left gaps at the back, and UCC had the quality to exploit it. Collins put the game to bed in the closing minutes for the visitors, showing silky skill to get behind a tired Trinity backline and easily rounding Grace to roll the ball into an empty net.

Trinity pushed for a miraculous comeback in front of the home crowd, but eventually fell short – though they did crack the crossbar with the game’s final play. When the referee blew the final whistle, the temperature around College Park seemed to drop a few degrees, with Trinity’s early exit confirmed and a tie in the second-tier Farquhar Tournament confirmed. They’ll face either Queen’s University or Ulster University in the semi-final tomorrow at 11am.

Speaking after the game, DUAFC coach Richie Maguire praised his team’s effort. “I can’t fault the effort and I can’t fault the application”, he told The University Times. “I thought the game hinged on whoever got the second goal first and unfortunately it was them. We really missed Niall Barr in midfield. He gets in there and keeps it simple. We missed that. I thought that they ran the midfield.”