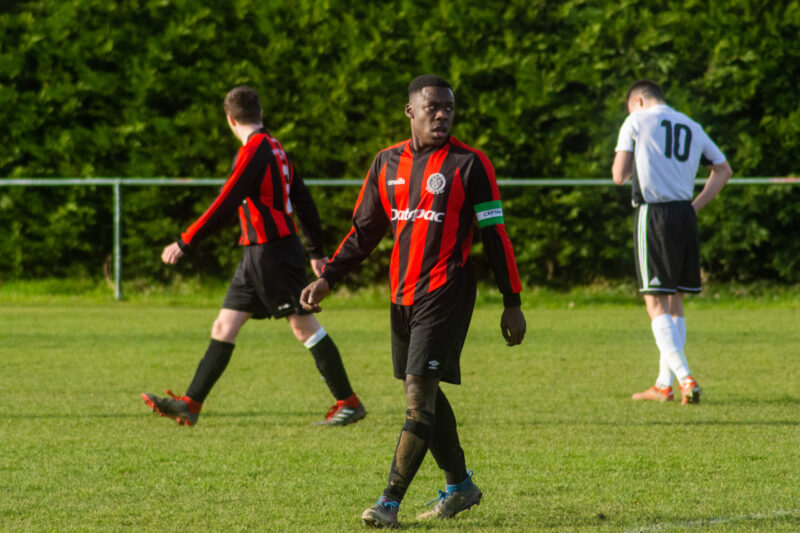 Fiachra Gallagher for The University Times

Dublin University Association Football Club (DUAFC) booked their place in the final of the Farquhar Cup this morning, overcoming Queen’s University Belfast 4-3 on penalties at the AUL Complex, after the match ended 1-1 in normal time.

In what was sometimes a scrappy affair, Trinity looked frustrated not to have found an opening to clinch the victory within the 90 minutes. Their eventual victory was deserved, with the performance of Dylan Connolly on the flank vital to DUAFC’s superior offensive game.

The match started slow, with both sides notably fatigued given the 24-hour turnaround from the opening round of the Collingwood Cup yesterday. With 15 minutes on the clock, the match had its first half-chance: Rory Nairn and James Woods combined on the break, setting up Darragh McGee to attack the Queen’s goal from the flank. McGee’s shot flashed across the face of goal and wide.

Queen’s looked to launch an attack of their own soon after, but Trinity mopped up and were able to hit back on the break. Woods tested with a shot of his own, but failed to hit the target – Trinity’s urgency in the counter-attack was promising, however.

Daniel Grace was called into action mid-way through the half: Padraig Slane’s delivery from a corner wreaked havoc in the Trinity area. Andrew Drylie’s shot almost capitalised on the confusion, but Grace – so often the hero in yesterday’s loss to University College Cork – was equal to it.

Trinity hit Queen’s on the break again: a high ball forward was nicked away from the oncoming Queen’s goalkeeper Conan Doherty by McGee. Nairn did extremely well to prevent the ball from going over the endline, finding McGee free with a glancing header. With Doherty struggling to recover, McGee couldn’t find the net, and the Ulster men were let off the hook again.

Against the run of play, Queen’s opened the scoring with the simplest of goals. Lorcan McIlroy latched onto a long ball over the top that beat the Trinity defence before he shot low under Dan Grace. With 26 minutes gone, the northerners had an unlikely lead.

Queen’s pushed ahead after the goal: Colin Crawford and Andrew Fox combined on the flank, causing all sorts of problems for the DUAFC backline. Crawford cut inside on one occassion, winning a free after a foul by Jason Boateng. Slane’s free-kick attempt was easily saved, however.

On the stroke of halftime, Dylan Connolly produced a moment of brilliance to pull Trinity right back into the match. Connolly controlled a loose ball on his chest outside the penalty area, before striking on the volley to equalise. The ball hit the top corner, leaving Doherty helpless.

Chances were few and far between in the opening exchanges of the second half, with both sides having to resort to snapshots from distance.

Trinity slowly began to take a chokehold on the match. Stringing a number of moves together, they upped the intensity after a lethargic start to the half. Connolly was the catalyst in the push for a second: he crossed for McGee, who tested Doherty with a speculative overhead effort that was palmed wide.

The half wore on, with Trinity on top but unable to pull ahead. Play ebbed and flowed, with both sides relying on long ball counter attacks to forge opportunities. McGee found himself in behind the Queen’s defence with 10 minutes on the clock, but his shot was shut down.

Dan Grace had very little to do in the second half – his team were indebted to him, nonetheless, after a crucial save denied Fox when the Queen’s attacker had slipped in behind the Trinity defence.

With time running out, James Kelly had a golden opportunity to seal the win for DUAFC. Woods ran at the Queen’s defence after dispossessing the opposition side in midfield. He squared the ball to winger Kelly at the back post, but the outstretched arm of goalkeeper Doherty was enough to deny Trinity a victory at the death. The full-time whistle subsequently blew at 1-1.

The match went to penalties to decide the first finalist of the Farquhar Cup. Poor penalties from Queen’s men Ronan Young and Josh Curry gave Trinity an advantage, with Grace consolidating their lead with a well-placed spot kick. Woods hit the post with his attempt however, throwing the Ulstermen a lifeline.

Ultimately, it came down to goalscorer Connolly to decide the tie. His powerful strike beat Doherty to earn his side a place in the final of the Farquhar Cup.

After the disappointment of losing out to cup-holders University College Cork yesterday, Trinity will be buoyed by their assured performance against a tricky – if average – Queen’s team. DUAFC will face Maynooth tomorrow in College Park to decide the winner of the Farquhar Cup.