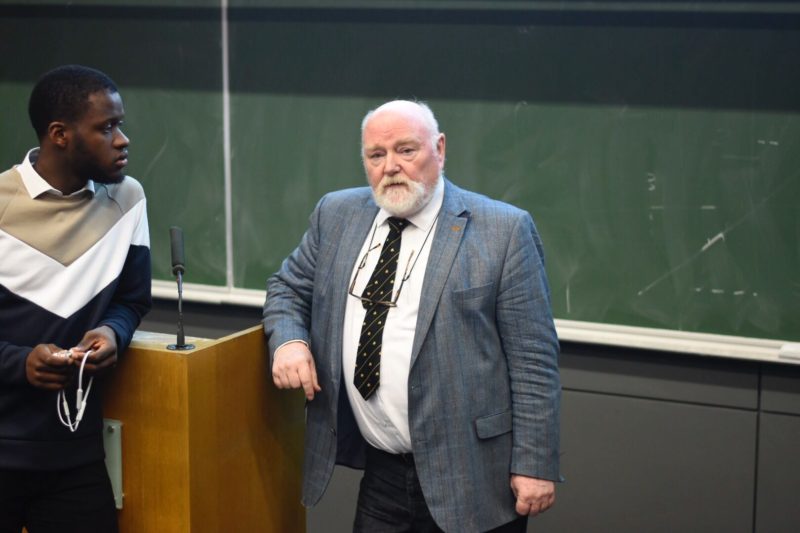 The records mostly pertain to meetings during the term of former Chair Donagh McDonagh, who clashed with members over access to minutes at the body's AGM.
Alex Connolly for The University Times

Dublin University Central Athletic Club (DUCAC) has refused to release minutes of its meetings from the last four years, despite receiving multiple requests in recent months from The University Times and Trinity News.

The body, which received over €350,000 this year in funding from students, is refusing to release minutes of executive committee meetings that mostly took place during the tenure of former DUCAC Chair Donagh McDonagh – whose term ended in acrimony after he declined to hand over minutes of previous meetings.

Access to minutes has long been a bone of contention for DUCAC – an organisation that has frequently been accused of a lack of transparency. Last September, members of sports clubs publicly clashed with McDonagh at the body’s AGM, accusing him of ignoring requests for access to minutes of previous executive meetings.

After multiple requests by The University Times in recent months for access to DUCAC’s minutes from the last number of years, Saidi today told this newspaper that the “minutes prior to my entrance as chair should not be released as they were not signed off by me, as I was not the current chair – so therefore it would almost be like going against the previous chair’s decision”.

He also confirmed that DUCAC had received a request from Trinity News under the Freedom of information Act. However, as DUCAC is a club and not a public body, it is not subject to the terms of the Freedom of Information Act. Saidi confirmed that an “email was later sent back to Aisling Grace, who is the Trinity News editor, stating why the minutes wouldn’t be released”.

Saidi – who beat McDonagh in the election for chair last September, after serving as vice-chair last year – said that DUCAC will release minutes of its meetings from now on: “I do believe that those minutes should be accessible to students – that’s why I lobbied for it and that’s why going forward we will be releasing the minutes.”

Asked why DUCAC hasn’t published minutes of its executive committee meetings since 2014, Saidi said he didn’t know, adding that the decision was made before he became chair.

DUCAC is one of five capitated bodies in Trinity, along with the Central Societies Committee, the Graduate Students’ Union, Trinity College Dublin Students’ Union and Trinity Publications. Capitation funding, which comes directly from the €3,000 student contribution charge, is allocated on a per-student basis – meaning an increase in student numbers will result in increased capitated funding.

Last year, DUCAC received €354,744 in capitation funding, the second highest of any of Trinity’s capitated bodies.

Saidi said the decision of DUCAC’s executive committee to publish minutes of its meetings online from now on represents a “major win” for the body. “I don’t think that’s something that would have ever happened if someone else had won, or someone else was in the chair position”, he said.

Saidi became the first student chair of DUCAC in its 100 years of existence in September 2019, defeating the incumbent McDonagh by a single vote at the club’s AGM.

During his term as DUCAC Vice-Chair, Saidi called for a major change to the organisation’s voting structures in order to “create a more transparent DUCAC”.

And in his bid for election as chair, Saidi said he was “running for chair in order to create a more transparent DUCAC, one that is answerable to the student”.

At the AGM, McDonagh was challenged by Aoife Simm, the captain of Dublin University Archery Club, over his willingness to hand over minutes of previous DUCAC executive meetings. Simm said that the club had made numerous requests for access to the minutes.

McDonagh denied having seen any requests for minutes apart from an email he received in the week before the AGM.

But his claim was refuted by Bethany Rush, a member of Dublin University Fencing Club, who said that a request had been made at a DUCAC executive meeting last year, which McDonagh was present at.

McDonagh asked those present to send him correspondence by letter rather than email. Checking email, he said, was not part of his role as chair of DUCAC.

He said that he could not remember receiving any request for access to the minutes of DUCAC meetings.

McDonagh also said that granting access to the minutes could cause potential legal issues relating to GDPR. Diego Coyle Diez, the coach of the archery club, argued that the names on the minutes could be blacked out.