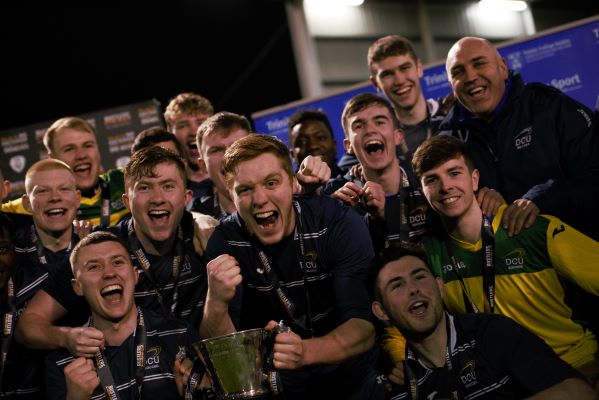 Dublin City University (DCU) were crowned champions of the Collingwood Cup for the first time after beating Ulster University (UU) 4-1 on penalties at Dalymount Park this evening.

Although the game failed to produce a goal over 110 minutes, both sides proved to be worthy finalists and fought tooth and nail throughout an entertaining final.

The first half was full of action. Right from the start, a fine bit of skill from DCU’s Sean Trimble gave him a yard to get his cross away. Midfielder Aaron Connolly connected brilliantly on the volley but his effort shot wide.

DCU’s Sean McCarthy – one of the standout players of this year’s Collingwood – was at the centre of a move in the 15th minute. After dispossessing UU’s Stephen Cairn in midfield, he played a one-two with Sean Cronin to open up space in the final third. Luring a defender in and darting past him, McCarthy managed to get a low arrowing cross away. The pass bounced right in front of Connolly, whose connection with the ball was imperfect.

Ulster were keen to get in at goal, but this proved difficult against a compact DCU defence. A cross from Craig Taylor was blocked but came back in to the feet of the left-back. Unafraid to shoot from goal, Taylor leathered a shot with laser precision towards goal, but his effort just went astray.

Both sides were showing why they’d reached the final – passes were crisp, and there was plenty of flair and technique on show. UU were just shading it when it came to retaining the ball, but DCU were certainly not without threat, and they had another chance 28 minutes into the half. Connolly had the ball in the D, but quickly shuffled his feet and recycled possession out to McCarthy, who fired low and forced goalkeeper Matty McClurg to get low to save. The resulting corner saw McCarthy find his captain Eric Whelan in the box, but he couldn’t direct his header home.

The chance of the game came in the 40th minute. After surviving a period of pressure, DCU’s Sean Trimble booted the ball as far he could – more out of relief than anything. Striker Jack O’Connor, chasing down a lost cause, got more than he bargained for after Marcus Greenfield left a backpass short. O’Connor got to it first and, after evading McClurg, passed it towards an empty net. But Owen McConville somehow got back in time to clear the ball off the line, in a moment of calamity and redemption that got the Dalymount crowd up on its feet.

After being spoilt for action in the first-half, both teams had a lot of pressure to deliver the same goalmouth drama in the second. Ulster’s Niall McGinely got the ball rolling with the opening chance of the half. The midfielder rose highest to get on the end of Taylor’s hooked corner, but the Ulsterman’s attempt went the wrong side of the bar.

But after some sumptuous football in the opening period, things got more scrappy as the second half moved along, with both sides finding it harder to make their passes stick. UU captain Marc McKenna had a crack from 30 yards, much to the delight of the crowd, but Imrich Toth was well placed to make the stop. 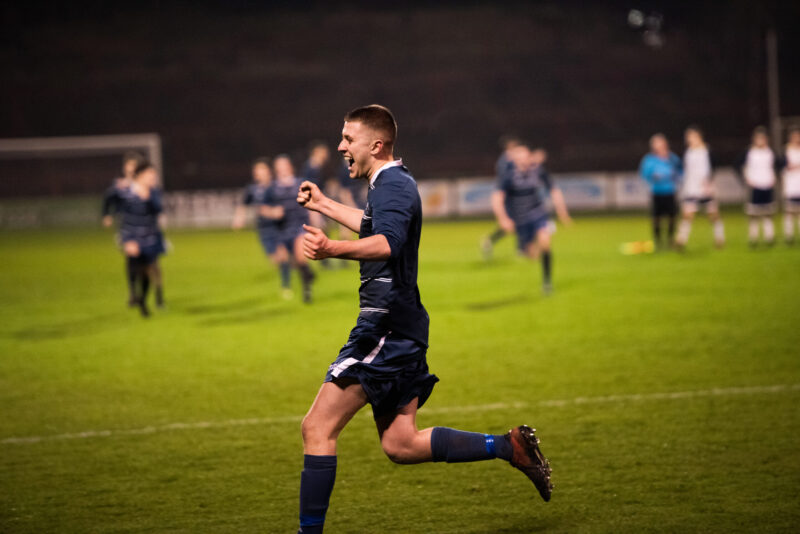 Striker Jack O’Connor celebrates after sealing his side’s win from the spot.
Alex Connolly for The University Times

Chances proved sparse as the half dragged on. DCU probably had one of the second period’s better openings near the 70th minute, but Connolly failed to connect with the ball in a yard of space in the box. The match continued at a similar, jittery tempo until the referee blew for full-time and, with the sides still level, both prepared themselves for extra time.

With both sides shattered after three games of football in as many days, extra time saw both sides resort to long balls, with even five-yard passes failing to finding their target. UU’s Taylor should have done better with a rasping shot from the right that went wide of the posts.

With neither side able to take the initiative in extra time, it came down to a penalty shootout – one of many in this tournament – to decide the winners.

Substitute David Mugalu put DCU in the lead, before Taylor levelled the sides with his wand of a left foot. But UU’s Niall McGinley registered the first miss, and McCarthy pressed home DCU’s advantage. UU winger Nedas Maciulaitis also skied his effort, meaning it was DCU striker O’Connor who had the chance to win the trophy for his side. He made no mistake, driving straight down the middle and sending the DCU bench wild.

The scenes post-match were a mixed bag of emotions. Speaking to The University Times, DCU head coach Declan Roche lauded his player’s efforts: “It’s a great day for the players and a great day for DCU Soccer.”

Ulster’s talismanic left-back Taylor, gutted to have lost, also praised the champions: “I thought we dominated large parts of the game, but credit to DCU who kept us going right to the end”, he told The University Times. “They were cool [at] taking penalties and took them very well.”