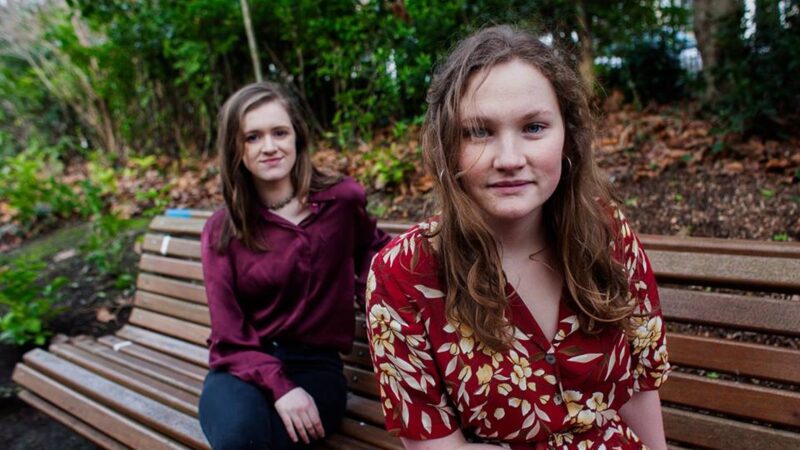 When I meet Laura Quirke and Claire Kinsella of Lemoncello in a restaurant on Dame St, they have just finished soundchecking for a sold-out gig in the Olympia, performing as part of David Keenan’s band.

They both seem calm, unpretentious and grounded, which comes through in their music as clearly as it does in their open conversational style. We sit down to talk about songwriting, the study of languages and what recording their new EP has taught them, as well as what’s coming further down the line in their music.

Lemoncello had their first release, Stuck Upon the Staircase, in April 2018, and have been touring off the back of the three-track EP ever since. They have been playing solo gigs, festival dates and support slots up and down the country, and even curated a weekend of gigs in Belfast last year featuring some of their favourite Irish and international artists.

One such artist is Sam Amidon, who both Kinsella and Quirke admire greatly, and agree is “reckless” in his experimentation within folk music, “bringing it into the modern day with strange, manic sounds”, as Quirke puts it. Kinsella says that artists like Amidon and Seamus Fogarty are especially inspiring to them as musicians because of how they push the boundaries of what audiences expect to hear from folk artists.

You can’t just express music through music. You need to be immersing yourself in other worlds

When I ask if the band see themselves going more in the direction of this kind of experimental folk, Quirke, who is the main songwriter, says that for her, melodies and words come from the subconscious. Her approach to writing does not involve “trying to create a sound of any sort”, but rather trying to express a part of life that she has witnessed or experienced. It’s undeniable that Lemoncello’s music reflects this sentiment, especially on tracks like “Stuck Upon the Staircase” – which manages to capture an intimate, inner feeling while simultaneously rooting the listener in a very visual, physical world of human interaction.

But it isn’t just other musicians or daily life that influence the writing of Lemoncello’s music. Alongside studying music at Maynooth University, where they met, Kinsella also studied Irish while Quirke studied French. We all agreed on the profound effect that studying a language can have on other forms of creation. Quirke put it succinctly: “You can’t just express music through music. You need to be immersing yourself in other worlds.”

Her experience of studying French opened her up to the world of what she refers to as chansons francaises – the powerful tradition of folk music in the French language, embodied by the likes of Jacques Brel and Barbara. She finds inspiration in the power with which they tell their stories, all while maintaining their own natural voices, in a style “almost like really powerful speech”.

The band also regularly perform songs in Irish, and agree that seeing the world through another language is like seeing it through a kaleidoscope of some kind, which can only be a good thing from a creative standpoint.

From what Kinsella says about how they experience music, the pair seem a perfect pairing when it comes to the arrangement of their songs

From what Kinsella says about how they experience music, the pair seem a perfect pairing when it comes to the arrangement and musical composition of their songs. Where Quirke is more acutely attuned to lyrics, Kinsella hears the music first. It’s from these corresponding angles that the two women approach the writing, and the equal blend of both can be heard clearly on their first EP.

There will be more than just their input, however, on their next collection of songs, which is set for release in March. They have been recording their second EP over the past while in Tigh na Ri Rua with producer and songwriter Gavin Glass, as well as with fellow David Keenan bandmate Gareth Quinn Redmond at his home studio.

The EP will be a record of where the band are now. Both women agree that they have learned a lot about recording and producing since working on their first release, and feel more confident about their move towards a slightly more fleshed out – but still wholly organic-sounding – record. Kinsella explained how important it was for the pair to work on their own demos before bringing the songs to the studio. She explains how they were able to test out new ideas such as chopping in found sounds and audio snippets of real life to complement the message of the songs, which is something I am very much looking forward to hearing.

Lemoncello are off to Switzerland in February to play a show in the village of Brienz, and from there they have some exciting plans in place concerning a cross-disciplinary collaboration and a music video, of which we shall hear more in the very near future. Their next Dublin date will be March 27th in Lost Lane, to celebrate the release of their upcoming record.