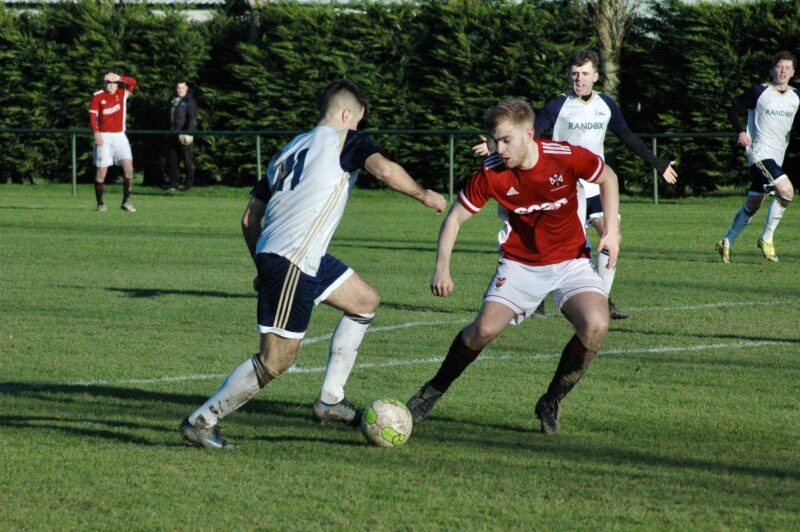 Despite losing captain Marc McKenna to a red card midway through the second half, Ulster University (UU) held their nerve to triumph on penalties over rivals Queen’s University Belfast in today’s Collingwood Cup quarter-final.

UU came into today’s game – held in the AUL Complex – as favourites, after a subjecting Queen’s to a 6-1 drubbing earlier this season. And they began the better of the two sides, probing at the Queen’s defence. The first – and perhaps best – chance of the half came after four minutes. A long-range shot from Ulster’s Ronan Wilson was well met by Queen’s keeper Conan Doherty. The rebound fell to Nedas Maciulaitis, but his shot thundered off the post and Queen’s were able to clear.

Both teams struggled to create any clear chances in the opening stages, perhaps a consequence of the winds gusting through the complex. On 14 minutes, a superb free-kick from Ciaran Dubbin of Queen’s was met at the back post by Adam Patterson, but his attempt ultimately sailed harmlessly over the bar.

Queen’s, inspired by the near miss, began to grow bolder: a cross from Padraig Slane lacked only an end product. But a lack of quality in the final third of the pitch plagued both teams.

With 10 minutes left in the first period, Ronan Young of Queen’s whipped in a great ball to Slane, whose attempted audacious flick could have been spectacular if not for the attentions of Matthew McClurg in the UU net.

UU almost broke the deadlock on the stroke of half-time, when Jack O’Mahoney latched onto a through ball from Maciulaitis. After rounding Doherty, however, he lost his footing and was unable to recover before the Queen’s defenders cleaned up.

The second half began much like the first – with UU dominating. Doherty was called into action early, producing a great double save despite Maciulaitis’s attempts to give his side the lead after 49 minutes.

Both sides, once again, struggled to create. While it didn’t seem it at the time, the next moment of note came after 54 minutes, when UU captain Marc McKenna picked up his first yellow for a hard tackle on his opposite number Patterson. Not 15 minutes later, McKenna was off the pitch: after a late sliding tackle on Young, he was shown a second yellow card by an unhesitating referee. 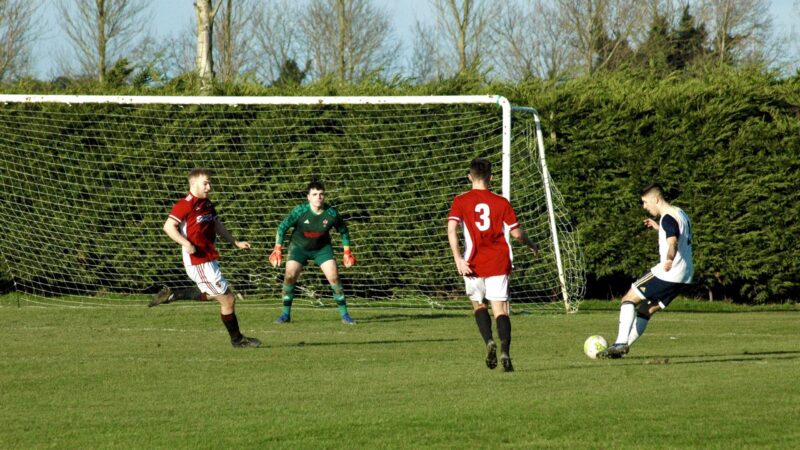 Neither side was able to press home their advantage in normal time.

Queen’s did not waste any time trying to press home their advantage. A probing ball in from the resulting free-kick evaded everyone, and McClurg was forced to produce an instinctive reaction save to stop the bobbling ball from finding its way into the back of his net. The keeper turned it behind for a corner.

The resulting set piece created the best chance of the game for Queen’s: Josh Curry rose the highest, but his attempt was thwarted by the crossbar.

Despite a numerical advantage, Queen’s still could not find their way through the UU defence. Daire Rooney produced what would likely have been the goal of the tournament after 83 minutes, attempting a bicycle kick that sailed narrowly past the top right hand corner of the UU goal.

Full-time came, and with the score still tied at 0-0, penalties were imminent.

Colin Crawford, second up for Queen’s, was first to blink, after Young had converted and UU’s Craig Taylor had matched him. McGinley pressed home UU’s advantage, and six penalties later – knowing a converted penalty would put his side through to the semi-finals – Owen McConville slammed home the winning penalty for UU.

Ultimately Queen’s, who crashed out in devastating fashion, were unable to make the most of their one-man advantage. UU, however, were far from perfect, and it’s hard to see them toppling University College Cork in tomorrow’s semi-final. Queen’s will face Trinity in the Farquhar Cup.