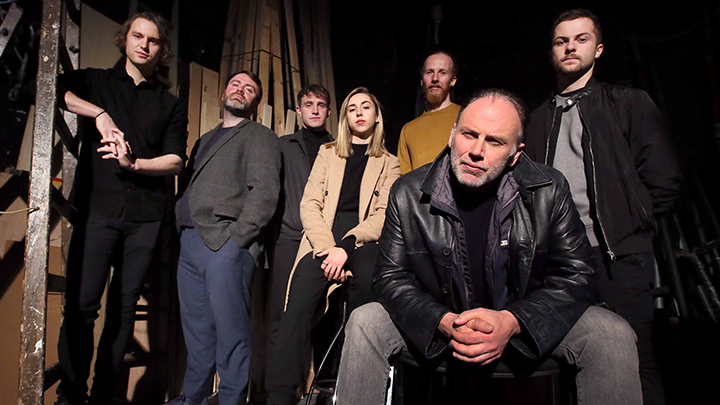 The Gaiety Theatre’s current production of Martin McDonagh’s The Lieutenant of Inishmore dives headlong into a contentious mess of fraught allegiances, twisted love and moral ambiguity in the story of a terrorist and his beloved cat.

Mad Padraic has a reputation for brutality and has been kicked out of the IRA for his extremity. But true to Martin McDonagh’s style, Padraic is nothing close to a one-dimensional villain. We first encounter him in Northern Ireland, brutally torturing a drug dealer as punishment for selling marijuana to Catholic children (if they were Protestant, that’d be another story, we’re told).

At the moment he’s about to slice off the dealer’s nipple, he receives a phone call from his father – which he casually answers by saying he’s at work – and learns that his cat, Wee Thomas, is doing poorly. Padraic flies into a nervous rage, and, beside himself, sets out immediately for his father’s house in Inishmore – after giving the drug dealer bus money to get to a hospital, of course.

Mad Padraic’s all-consuming love for his cat is a seemingly incongruous trait that is manipulated by others and drives the action of the play. His devotion to this small, furry thing humanises him at first, demonstrating his capacity for love and affection. This soon takes on a different meaning, however, when you watch Padraic shoot a different cat without hesitation. The audience also learns that Mad Padraic values Wee Thomas’s life over his father’s. Then you realize that blind, fundamentalist love isn’t really such an incongruous trait for a terrorist. It would be creepy, if it wasn’t so funny.

Forcing an audience to grapple with the nuances of moral codes and question the value of patriotism at any cost was controversial at the time of the play’s premiere in 2001, but these issues remain pointedly relevant in today’s political climate of Brexit and Trumpism.

Thankfully, this brilliant script was only enlivened by the cast’s rich performances. Paul Mescal, as Mad Padraic, elicits both sympathy and terror from the audience in turns. Don Wycherley as Padriac’s father and Alex Murphy as the teenage neighbour easily evoke horror while they hack bodies up into pieces, but show even greater skill by making the audience laugh at the drudgery of the task at the same time.

This may not be the type of theatre you’d expect at a venue like Gaiety Theatre. Envision plush red seats, two tiers of beautifully detailed balcony facades, gold ornamentation and women in proper evening gowns watching a corpse have its teeth hammered out.

That said, it’s fitting that the Gaiety would present a performance with such high production values. Meticulous detail was paid to the construction of the stone wall running along the road, a painted landscape backlit to show the time of day and a well-used bookcase replete with odds and ends.

However, it’s the kind of play that might fare better as a film. Despite the highest production quality, the absence of real dead cats, corpses, guns or truly convincing equivalents on stage necessitates a further suspension of disbelief from the audience. Suddenly, there’s an extra step away from reality the audience needs to bridge. However, the magic of a live performance is that these graphic and inconceivable things are happening right before your eyes and you can’t control them by just pressing pause. You’re a witness to the events taking place.

In good company with McDonagh’s In Bruges and Three Billboards Outside Ebbing, Missouri, The Lieutenant of Inishmore elegantly portrays the beauty, madness and absurdity of humanity in a story that’s twisted, lurid and grotesquely violent, but always deeply funny. Director Andrew Flynn’s masterful rendering of the script’s complexity and the cast’s consistently lively and moving performances garnered the play’s standing ovation.

The Lieutenant of Inishmore runs until March 14th and tickets can be purchased at the Gaiety Theatre website or box office from €18.50.