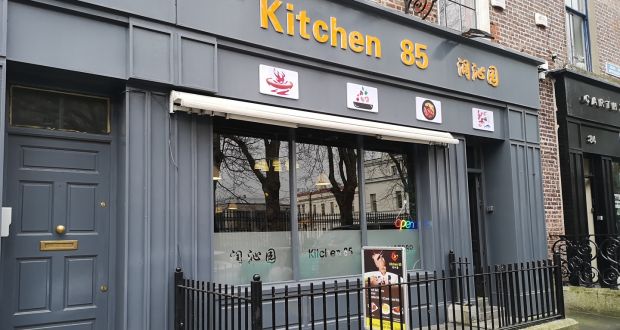 Tiresome car people often go on about a “new car smell”, the primary and intense joy of a clinically clean product, fresh from the factory and uncontaminated by imperfect human use, inextricably linked to the rush of the purchase and the corresponding status that it brings. Or at least I imagine that they do from watching Top Gear as a child.

Restaurants are a different animal entirely, and the “new restaurant smell” is something I hadn’t experienced until visiting Kitchen 85. The new restaurant smell represents something far more shaky and uncertain, a set of unrealised culinary possibilities, ranging from glory to disgrace, and thankfully my first experience of it was melted away by delicious wafts of roast duck and pork.

Kitchen 85 is a brand new venture on Marlborough St (parallel to O’Connell St) from the people behind M & L, the fantastic Sichuan restaurant off Parnell St that became infamous for its dual-menu system a few years ago. If you were to look at the menu in English, you would find standard Dublin Chinese fare, including the authentic delights of the spice bag and special noodles. Given a comprehension of Mandarin, however, another menu promised an entirely different offering, including soft shell crab in egg yolk, steamed sea bass and the intensely spicy Sichuan chicken. The 2013 edition of Where Chefs Eat gave what was then essential advice: if you can’t speak Mandarin, then go with someone who does. As its acclaim grew the restaurant realised it no longer had to serve a lesser menu to its anglophone customers and pushed its excellent Sichuan cooking to the fore.

With such a healthy reputation surrounding M & L, much was expected of the new Kitchen 85, but it’s certainly not just more of the same. Kitchen 85 has a focus on Cantonese roast meats and hotpots, and its owners are trying to produce a more refined dining experience than at their fairly hectic Sichuan base. While the trickle of a floor-bound water feature and the overeager attention of two waiters didn’t quite create the unabated comfort intended, I am happy to put it down to the teething of a very new restaurant.

The food is of course the most important hurdle for any restaurant, and Kitchen 85 absolutely succeeds on this front. We ordered too much meat and not enough soup, but had a fantastic meal nonetheless. The roast duck had beautifully crispy skin and was marinated to perfection. The pork was sticky, precisely cooked and maintained the delicious standard of the duck. Singing heights of garlic, ginger, black bean sauce and scallion were sweetly packaged within the rich meat.

As a combined dish at €18.90 it was more than enough meat for two and was deeply satisfying accompanied simply with boiled rice (€2.50) and mixed veg (€5.40), while a hotpot with diverse ingredients of your choosing would also be a great choice. Adventurous souls may go for pig blood, lotus root or Chinese-style razor clams. A pot of subtle Chinese tea complements the fatty richness of the food well. There is corkage on brought wine available for €5. The cooking here is extremely well executed, and it is clear that a great deal of care and skill is involved in the kitchen.

The style of eating is invitingly communal and the restaurant promises to be a great space for large groups. Whole sea bass looks simply fantastic on a large platter and the act of sharing such comforting yet exciting food is a brilliant way to bring people together. Vegetarian options are scarce.

Kitchen 85 delivers at the same high standard as its sister restaurant a little further north, and marks a significant raise in the quality of Cantonese cooking available in the city. For when you feel like sharing delicious comfort food, cooked exquisitely, Kitchen 85 should be a top consideration.