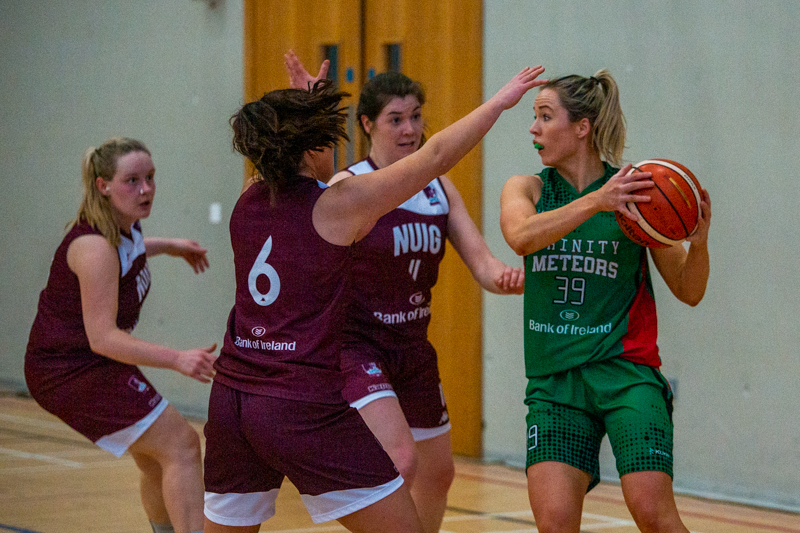 Trinity Meteors tonight bounced back after last week’s shock cup final defeat to Portlaoise Panthers with a confident and comprehensive win over NUI Galway Mystics in the Sports Centre. Solid at the back and clinical at the basket, Meteors never looked under pressure against a Mystics side who finished bottom of last year’s league. In the end, they were full value for their 73-43 win.

If there was little doubt by the end about who deserved the points, then the game began with scores for both sides. Mystics drew first blood, before Trinity’s Edel Thornton – named Basketball Ireland’s player of the month for December – hit back with a three-pointer. Lauren Grigsby added a midrange jumper to bring the home team ahead. Strong defence from the Trinity side wasn’t enough to keep Mystics from getting points in the post, but the Meteors’ three-point shooting extended their lead to five points. Quick passes around the three-point line stretched the visitors and Trinity’s shooters weren’t long building up a head of steam and extending their lead.

And while Trinity’s shooting remained accurate, for Mystics it was a different story, as they struggled to make their three-pointers count and laboured to reduce the deficit. Corner three-pointers from captain Katie Kilbride and Lauren Flynn on consecutive plays furthered the lead for the home side, though the hot start to the Meteors’ shooting slowed somewhat as the second quarter continued.

Grigsby’s solidity on the defensive boards prevented the Mystics from getting second-chance points, and led to a number of easy baskets on the other side of the court: Meteors went coast to coast late in the second quarter before netting a two-pointer to make it 37-22. 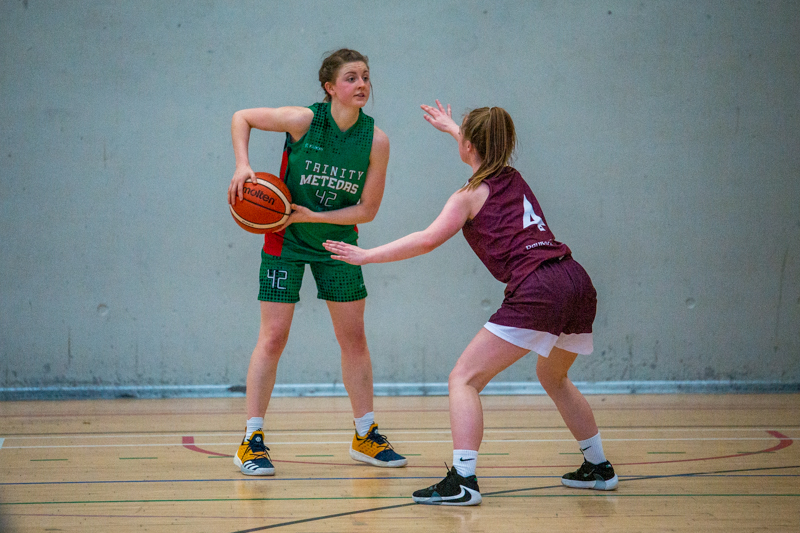 Meteors were solid in defence and clinical in attack against NUI Galway Mystics.

Eimear Mairtin, having subbed in for Thornton at point guard, successfully managed the side in transition, finding her teammates open for easy points off defensive plays. Trinity closed out the first half with a deserved 45-26 lead.

The Mystics showed a great deal of fight coming out of their half-time talk, with Robinson forcing consecutive turnovers while her side finally started showing signs of life at the basket. Trinity failed to exert the same level of dominance that they had been enjoying late in the first half, with errant passes and defensive mistakes seeing the lead cut to just 10 after Galway’s McCreanor landed a shot from range.

Until now things had looked rosy for the Meteors, but now passes were going astray and momentum was just starting to swing. But when this Trinity side turn it on, they really turn it on, and a quick two-pointer was all they needed to wrestle back control. It wasn’t long before they were comfortable again at 50-35, and when NUIG had a player helped off the pitch with an injury, there was a definite sense that the momentum had gone out of the visitors’ fightback.

Grigsby, sharp in attack as well as defence, landed an and-one that further secured the Meteors position, and a late score from Carolyn Binder made it 60-38 coming into the final quarter. And when the first points of the final period went Trinity’s way, the fight drained out of the visitors. Trinity remained solid and composed, though, with Sarah Kenny picking up another two points from the baseline, and from then on there was never any doubt. Mystics did cut Trinity’s lead towards the end with a few successful three-pointers, but the deficit was 30 points and the game was over. Having overcome a third-quarter slump, Trinity were well and truly in control as Kilbride dribbled out the clock on a win that keeps her side in the hunt for promotion – as well as relegating last week’s defeat to the back of the mind.