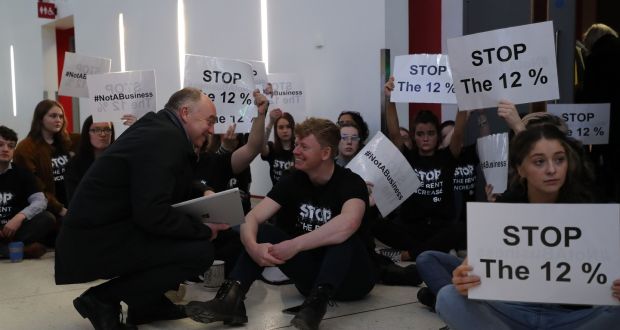 The president of University College Dublin (UCD) has said that there is “no way” that the college will reverse its decision to increase on-campus rent by 12 per cent over the next three years, despite outrage from students.

Speaking to the University Observer, Andrew Deeks said that “absolutely, there’s no way that we’re going to back down on the rent increase”, and that Dublin’s housing crisis “can’t be addressed by capping or reducing rents”.

Last week, UCD Students’ Union (UCDSU) staged a protest outside Deeks’s office, demanding a reversal of the decision and lambasting the college’s failure to respond to an open letter the union wrote criticising the hikes almost two weeks previously.

Deeks said: “You have to keep it in perspective. I think that there has been a couple of small demonstrations. I know the Students’ Union leafletted the whole of the 3,500 residences that are there, and there was a small demonstration.”

“So I think there’s a danger of overstating that position, and there will be many other students that see the bigger picture here.”

In an interview with the Irish Times last week, Deeks said that the student reaction to the rent hikes were “emotional”.

Speaking to The University Times last week after the UCDSU-led protest, UCDSU president Joanna Siewierska said that the college had not issued a formal response to an open letter that the union sent to them nearly two weeks ago.

Siewierska expressed “solidarity with Trinity and with other institutions” facing “ridiculous” rent increases.

In Trinity, proposed rent increases on Trinity’s student accommodation are off the table – for now – with “no proposal for a rent increase” on the agenda for the next meeting of College’s Finance Committee.

Thomas Deane, a media relations officer in Trinity, wrote in an email statement to The University Times that “at some stage an increase of some sort will have to be considered”, but that “it is too early to say what or when that increase will be discussed”.

Despite the proposed increase being taken off the table, Trinity College Dublin Students’ Union resident Laura Beston led a protest in blocking off Front Arch last Thursday, to demonstrate against any rent increases.

Speaking to The University Times at the protest, Beston said: “TCDSU completely opposes any rent increases that Trinity College Dublin attempt to bring to the table. Today’s actions are merely a starting point and we hope that this action will encourage many more students to get on board.”

“We have launched our petition against rent increases on campus, calling for a rent freeze, in conjunction with today’s action. Any student who feels angered about the continuing increases to the cost of rent on campus should make sure to sign it. The more numbers we have opposing the proposed rent increase, the less likely it is to happen.”

“Far too many of our students are forced into precarious situations because of the Dublin rental market and the rising cost of on campus accommodation. SUSI hasn’t been adjusted to meet the rising cost of living and the austerity cutbacks have not been reversed. Students are paying vast amounts of their wages on rent, as are their parents.”

“We cannot speak of access to education and call ourselves champions in these areas when our actions and decisions are deliberately blocking students from accessing third level education,” Beston concluded.