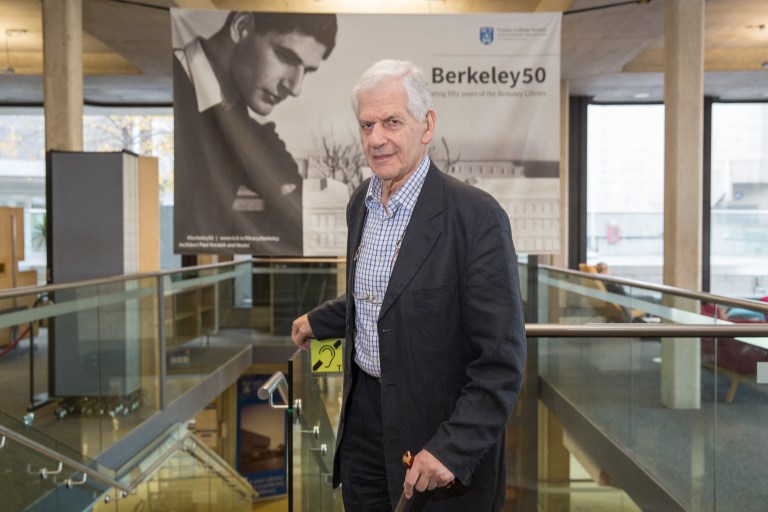 Trinity has paid tribute to Paul Koralek, the architect who designed the Berkeley library and co-founded the firm that designed the Arts Block in Trinity, after his death this week aged 86.

Koralek was commissioned to design the Berkeley aged 28, with the construction of the building marking a new era for Trinity as the library collections became accessible to a significantly wider range of readers.

The Berkeley is now seen as a prime example of brutalist architecture, and Koralek’s design established him as one of the most prominent architects in the field.

The Austrian-born architect entered a competition to design a new library, which would complete the western boundary of New Square, in 1961. He submitted his entry from New York, never having seen the site in person.

In a press statement, Helen Shenton, a librarian and archivist in Trinity, said: “Paul had a long-standing relationship with the Library, Trinity and Ireland. Many of us who had the privilege to know him formed a deep respect and admiration for him and we have especially fond memories of his recent visit in 2017. We wish to extend our deepest condolences to his daughters Lucy and Katy on this very sad occasion.”

“The Berkeley Library”, Shenton said, “transformed library services for our students and readers. It was a modern library not just for Trinity, but for Ireland”.

Read More on the Berkeley
Named after Irish philosopher George Berkeley, the brutalist library celebrated its 50th birthday in 2017.

“Paul’s architectural vision for this modernist building played a critical role in making this possible.”

The Berkeley library was opened in 1967 by then-President Éamon De Valera, becoming part of the cityscape of Dublin’s new modernist buildings alongside Busáras, Donnybrook Bus Station, Liberty Hall and Hawkins House. Koralek visited Trinity in 2017 to mark the 50th anniversary of the Berkeley.

After designing the library, he went on to co-found an architectural practice, Ahrends Burton Koralek. The firm also designed Trinity’s Arts Block, which was completed in 1978. The Arts Block’s construction marked the first time the Trinity campus became accessible via Nassau St, a change for a College often criticised as closed off to the public.

Brutalism was a late modernist architectural movement that sought to match architectural authority with a socially conscious outlook through the use of monumental forms. It drew inspiration from popular culture and urban life.