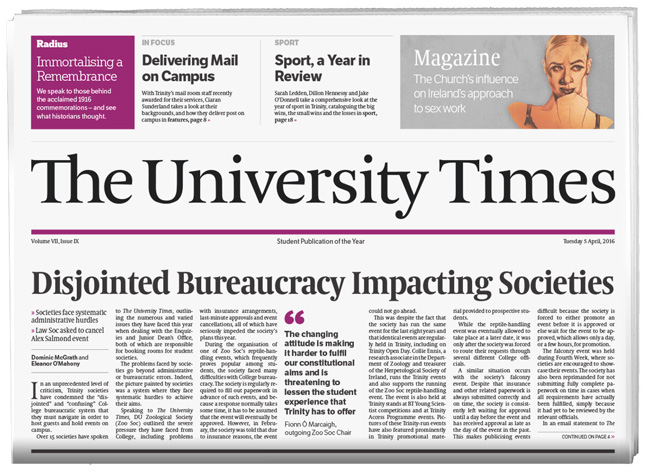 On the face of it, this year’s race for editor of The University Times represents the position’s second contested election in three years. But given that Michael McDermott’s campaign against Eleanor O’Mahony consisted mainly of Spiderman jokes, this is realistically the first time that two genuine candidates have gone head to head in a bid to lead the newspaper. For the clued-in neutral, it’s a mouthwatering proposition.

Susie Crawford, who currently edits the paper’s Radius supplement, is going up against history in her pitch to become editor. She’s the first staff member since the paper got editorial independence from TCDSU to run against the paper’s deputy editor. Cormac Watson, her competitor, has four years’ worth of experience, having served as sports editor before being appointed deputy editor this year.

The obvious difference between the candidates lies in their differing experiences with The University Times. How this involvement informs their plans and policies will define the tone of an unprecedented race. Watson credits his three-and-a-half year experience with teaching him skills he says are vital for an editor. “I’ve learned about layout. I’ve learned about advertising and getting advertising revenue in, running a whole paper. I’ve been acting editor twice now during the year,” he says.”I just have a knowledge, a very in-depth knowledge, of how the paper is run and what an editor needs to do.”

Crawford, meanwhile, is confident that her communication skills and time management make up for her comparative lack of experience: “I personally believe that a large part of that role is communication and management”, she says. “I have made a huge effort within Radius to make sure that lines of communication are open and specifically to give personal feedback to every person. I have done this because I understand, having been a new writer last year what a difference it can make to have that open minded communication with someone who is in the know.”

If their selling points are different, though, then Watson and Crawford broadly agree on the bread-and-butter issues: both say its primary function is to hold College accountable, and they’re united on the paper’s coverage of student issues and, particularly, its role as a school of journalism.

In previous years, candidates have often been quizzed more about the value of the paper than their own personal experience. Candidates have repeatedly been asked to justify the cost of running the paper given the often precarious financial position of TCDSU. Watson feels the paper has more than shown its worth, pointing out that the union ran a surplus this year, proving that “the SU can run a profit and The University Times can simultaneously exist”.

Crawford highlights the success of the paper’s current editor, Donal MacNamee, for his efforts in securing advertising: “He’s shown that if you really show the time and pick up the phone and make those connections it’s more than possible to bring in money from outside sources.” Crawford also mentions that she is eager to speak with societies on campus in an attempt to learn from their “community engagement and about advertising and sponsorship”.

Another area that often looms over the editor’s election is the role of print in the paper’s future. Watson brings up climate change and sustainability on this point, arguing that “I think we take climate change seriously, but we need to start taking it more seriously”. Watson said he plans to bring in a climate change editor position, “who would focus solely on climate change marches or environmental marches”. He also suggests that as editor he’d cut the paper’s print run by a third.

Crawford, who says she’s a “huge fan of print”, argues that “there’s definitely room for improvement” when it comes to the paper’s online presence, particularly when it comes to sections outside of its news coverage. “Specifically in terms of news it’s fantastic, but I think there’s room for improvement in other sections of the paper for their online presence.”

The paper has often faced accusations of insularity – something both candidates are keen to discuss. Crawford, who joined the paper in third year, draws on her personal experience: “I was still terrified of the UT because there was this notion that the UT was super intense, super hard work and no one knew really what went on there.” She says she wants to “abolish the notion” that the paper isn’t accessible.

Watson, who started writing in first year for the paper’s sports section, says it’s a “good question”, flagging the changing nature of Trinity’s student population as an issue that The University Times needs to address: “Because that’s what I grew up with – it [The University Times] was a place where no matter who you were, or no matter what you were studying, you were welcome if you were passionate about journalism and wanted to get involved. I think that’s a culture that’s really important.”

Last April, The University Times faced a referendum that could have gutted its finances, after a controversy over its reporting. Both Crawford and Watson, however, focus on the positive outcome of the vote. “If you look at the result of the referendum it was a landslide victory for [The University Times] – we got three quarters of the vote”, says Watson. Crawford says “the students saved UT”, adding: “I think I’ve seen more friendliness towards the UT this year than I have in previous years.”

Both candidates argue that the presence of two newspapers on campus is a positive thing for students and the College. “That competition really drives us”, says Watson, the more experienced of the two when it comes to reporting. “Drives our coverage, makes us want to improve, makes us want to expand our coverage and make our newspaper look better in every aspect.” Crawford also points to the advantages of the paper’s competition with Trinity News: “In terms of news it’s fantastic, because both papers are working harder because of each other to cover those stories, cover them well and cover them quickly. I think that’s brilliant.” Both papers grant opportunity and experience to a large staff of students, which Watson says shows the “demand for journalism” in Trinity.

In all, the candidates have not yet diverged significantly, on either their views of the paper or their hopes for its future. The election, however, is sure to throw up differences in strategy, policy and perspective, and it will be fascinating to see whose vision resonates more clearly with voters.

Ciaran Molloy is Editor-at-Large of The University Times, and will edit the editor race during the upcoming TCDSU elections. Assistant News Editor Robert Quinn will act as the race’s correspondent.