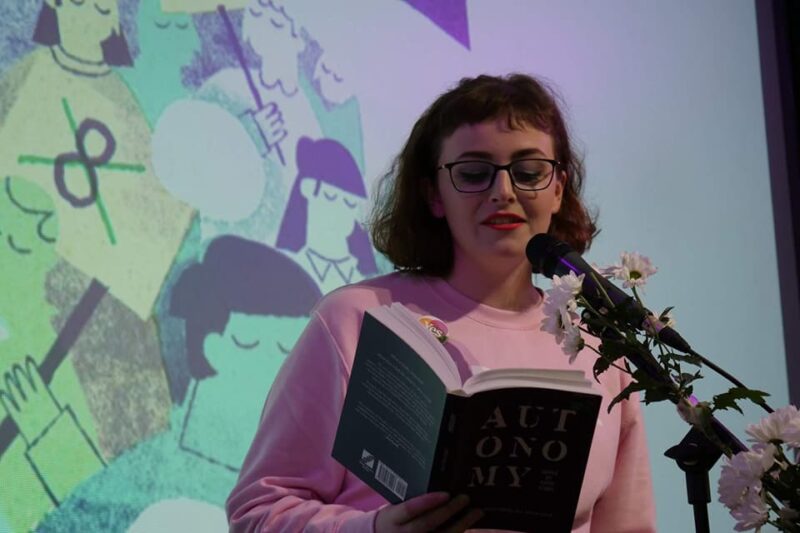 Despite Ireland’s rich literary history, and its reputation for being home to some of the world’s most talented and lauded poets, the poetry scene has not always been welcoming to a multiplicity of voices. Thankfully, this appears to be changing.

Eva Griffin, one of the co-founders of the Not4U Collective, is pushing to make the Dublin poetry scene more inclusive by diversifying the poetry that exists within the public sphere.

When Not4U was established in 2018, Griffin was already a fully paid-up poetry enthusiast. Now, she has been reading and writing poetry for four years, and she says that she set up the collective in response to a poetry scene that was quite exclusive – dominated and organised by a single person and thus not affording opportunities for minorities and those with differing perspectives to have their voices heard.

Griffin says the collective hoped to change this by providing a platform predominantly, although not exclusively, for LGBTQ+ poets. “It’s not that we go out looking for that, it’s just that those are the poets we read and listen to”, she says. Griffin, who did her master’s degree in gender, sexuality and culture in University College Dublin, says it was when she was undertaking this task that her taste in poetry shifted. In setting up Not4U, she hoped to give the poetry she is drawn to a wider audience.

It’s not that we go out looking for that, it’s just that those are the poets we read and listen to

Griffin explains the significance of the collective’s name, Not4U. “[It] might seem abrasive at first, but what it really means is that the collective is for anyone who has felt uncomfortable, unheard or unsafe at literary events. The name is turning the idea of an elitist, predominantly straight male literary scene on its head – this time it’s for us, not for you! That’s not to say that our events are closed to men. Anyone can attend, but the voices in the spotlight will be different.”

The initiative has so far been successful in achieving its goal. The collective organises and hosts poetry events and workshops at which “most of [the] line ups would be predominantly queer women”. The collective, Griffin says, is a passion project for both her and co-founder Jess McKinney. She adds that all the money raised by the events, readings and zines, with the exception of one workshop, has gone to charities such as the Dublin Rape Crisis Centre, Bodywhys and Inner City Helping Homelessness.

Despite the success of the collective, and the plaudits it’s earned for broadening Dublin’s poetry scene, Griffin says that the prospect of setting up the collective was “daunting”: “It takes a while to realise you can do things yourself.”

She adds that a lot of the logistics involved in establishing the collective were about knowing people, venues and who to contact.

It might seem abrasive at first, but what it really means is that the collective is for anyone who has felt uncomfortable, unheard or unsafe at literary events

In the age of social media, when we are constantly being stimulated and entertained, you would be forgiven for assuming that the literature and poetry scene has suffered because of our desire for almost instantaneous gratification. I’m interested, though, by Griffin’s perspective on social media and the influence it has had on literature: “There’s the whole debate about the work [being] too shallow, [that] it’s not poetry. There are a lot of social media poets, and that argument is always made, but I don’t think there’s any harm in something that makes people read.”

Griffin is upfront about the general reluctance amongst poets to share that they write poetry and the necessary vulnerability of poetry as an art form. I’m struck by the sense that Not4U has created a community that creates camaraderie and support for all poets – not just marginalised people. Griffin’s enthusiasm is palpable as she tells me she doesn’t think Dublin’s poetry scene is too small: she says she’s constantly meeting people and adds that “creating a new space, you’re going to attract people who hadn’t been in the poetry scene before”.

By creating this new platform for poetry, the Not4U collective is helping to diversify and expand the Dublin poetry scene, and with the future of the Irish poetry scene in the hands of people like Griffin, who are determined to create a space for a variety of perspectives, the future of Irish poetry looks bright.

Griffin has just published a pamphlet called Fake Hands/Real Flowers, which is available at selected bookshops. She assures me that the collective would “definitely” be holding an event soon.