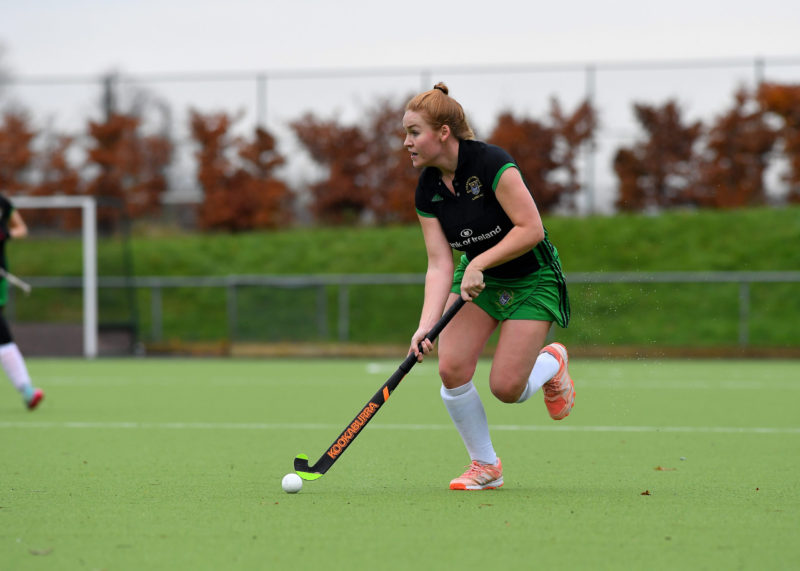 Dublin University Ladies Hockey Club (DULHC) used goals in each quarter to cruise past Rathgar on a cold and exceptionally windy Saturday afternoon in Santry, recording a 6-0 win in their Leinster League Division 1 clash.

“Even when we’re winning matches quite well, we still concede”, Delamer told The University Times after the game. “So,we’re happy with [the clean sheet]”.

But for all that DULHC impressed, bottom side Rathgar put in a performance befitting of their league position and in truth affected Trinity about as much as Storm Ciara, with errant passes and poor defence hampering their game.

DULHC were relentless in attack from the off, and it paid dividends midway through the first quarter when Buttimer opened the scoring off a pass from Rachel Burns – who was at the centre of the Trinity attack throughout the match.

Sarah Lavelle doubled Trinity’s lead 10 minutes into the second quarter after she blew past her defender and tapped in Keating’s cross from close range. The 2-0 scoreline would hold until half-time.

Rathgar finally got some momentum going early in the third quarter, sustaining a small amount of pressure in the Trinity half. That momentum culminated in their best chance of the day five minutes into the quarter: a shot that forced Trinity goalkeeper Iseult Cambay to get down smartly to her right to save. It was the closest Rathgar would come to scoring all afternoon.

Trinity quickly took back control after Cambay’s heroics and, five minutes later, Delamer dribbled around the Rathgar keeper, beating her to her left and extending DULHC’s lead to 3-0.

The floodgates opened with three fourth-quarter goals from Trinity. The first came early, when Susie Osborne fired one into the back of the net off a short corner. Erica Markey scored the game’s finest goal just a few minutes later, a long-range rocket into the bottom right corner to give Trinity a 5-0 advantage.

Ruby Keating capped off the scoring with a goal of her own right before the referee’s final whistle put Rathgar out of their misery.

Brian Scully’s side now sit second in the league, level on points with old foes Monkstown and eight points behind league leaders Corinthians.

Saturday’s result was a crucial one for Trinity in their quest to defend their league title. With just six games left, there is no margin for error in the pursuit of Corinthians.

Trinity will be back in action for another must-win match at Santry Avenue on Thursday night against Glenanne, a side just below DULHC in fourth place.