Trinity is set to spend €16 million purchasing the former AIB Trade Centre in the IFSC – a building it has leased since 2016 – but plans to sell the property on again within five years, The University Times has learned.

A confidential memorandum, presented to College Board for approval in January and seen by The University Times, reveals College is buying the property in order to secure its use “for the foreseeable future”, amid concerns that a new owner might not renew College’s lease on a building it has spent €3 million fitting out.

But the report, delivered to Board by Director of Campus Infrastructure Mike Clark, recommends that College sell the building in five years, when staff in the building will have moved to Trinity’s Engineering, Environment and Emerging Technologies (E3) Institute.

Trinity has rented the property at an annual cost of €735,000 since 2016, according to the memorandum.

Two valuations of the property have valued it at €16 million.

Trinity’s lease on the building expires on March 28th, 2021, the memorandum states, and “the priority in the first instance is to secure the use of the building for the foreseeable future”.

The proposal, which received Board approval, could also see Trinity decide to extend its lease by an extra 25 years if it needs it longer term. It could also opt to rent the property on the open market after five years. 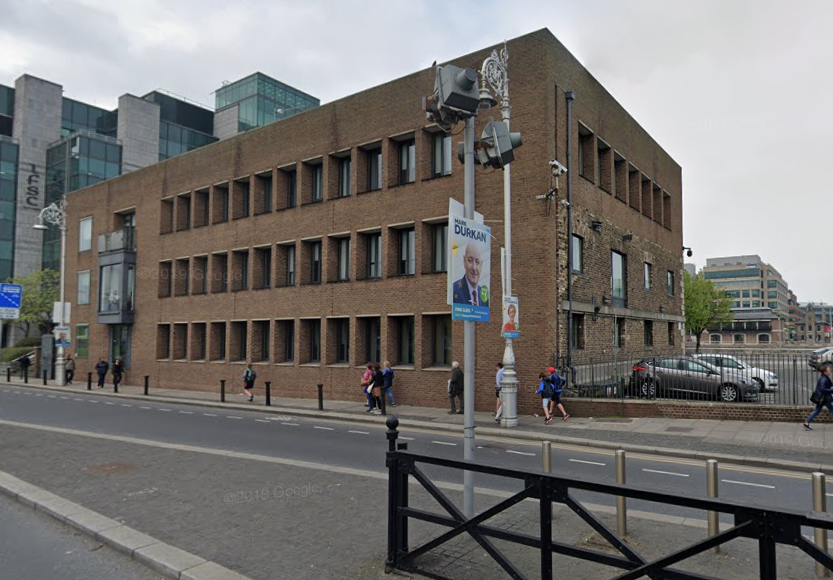 A street view of Stack B in the IFSC.

If Trinity does opt to sell Stack B, the report says, “it is assumed that we will sell the building in five years’ time for the purchase price” of €16 million.

The memorandum describes the IFSC building as “a tradeable asset for the future and especially post completion of TTEC” – College’s Technology and Enterprise Campus. Its purchase, according to the report, was mooted in the College’s 2018 Estates Strategy.

Trinity will take out a five-year loan in order to finance the purchase, “with the intention to dispose of the building on completion of the TTEC E3 Research Institute”.

Trinity’s campus has undergone major developments in recent times, with many further changes in the pipeline.

The east end of the campus in particular is undergoing a dramatic transformation – the old biochemistry building, Robert’s Laboratory and the PC huts have now been demolished to make way for the E3 Institute.

Last month, The University Times reported that College had made dramatic cutbacks to spending plans for the project after a sharp decline in projected student income over the coming decades.

Confidential documents presented to Trinity’s College Board in November, obtained by The University Times, show major changes to the institute’s business plan, with projected costs down more than €55 million over a 30-year period.

The figures show a number of miscalculations in the previous business plan, approved by the College Board in February 2018, with an €85 million drop in expected student income – down from €659 million to €573 million.

They suggest Trinity significantly misjudged many aspects of a project that in 2018 received the largest philanthropic donation in the history of the state – a €25 million contribution from donor Martin Naughton.