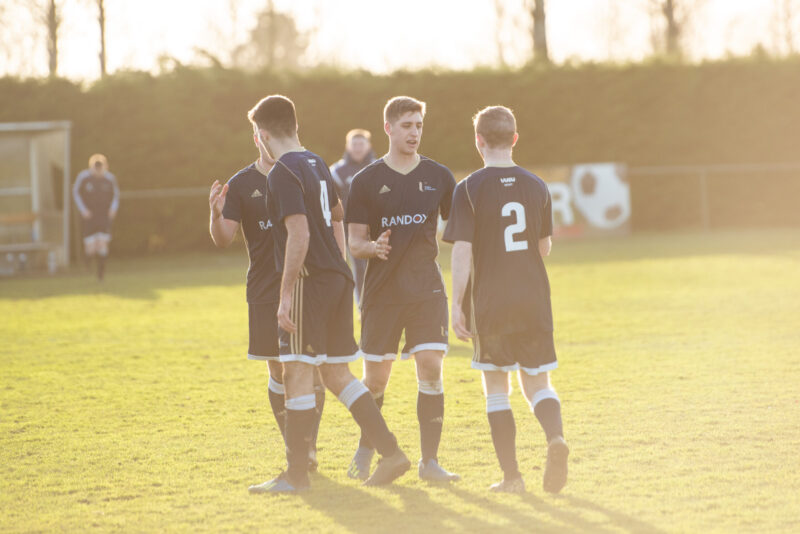 Ulster University (UU) turned the Collingwood Cup on its head this afternoon, knocking reigning champions University College Cork (UCC) out of the competition after a frantic 2-1 win at the AUL Complex.

Both sides had prolonged spells of dominance, but ultimately it was UU’s rapid passing game that earned them victory over the 2019 winners.

The game began with a blistering pace. UCC could have easily opened the scoring in the opening minute, after an assault on the UU goal straight from tip-off. In the next phase of play, UU’s Nathan Best secured possession and shot low to beat Arthur Nganou in the Cork goal, making it 1-0 after just two minutes of play.

UU continued to dominate after taking their early lead. Jack O’Mahony crossed in search of Nick Beta, after UU rapidly shifted play back to the final third. Beta couldn’t quite get on the end of it, but Cork were beginning to waver.

Just when UU looked nailed on to stroll to a shock victory, the cup-holders hit back. Creating an opening from very little, Matthew McKevitt was able to find the room to shoot low past Matty McClurg and level the scores at 1-1.

Ulster’s Craig Taylor emerged as a key player for his side over the course of the match, partly due to his proficiency over the dead ball. His first attempt on goal from the edge of the D nicked the outside of Nganou’s post, eliciting gasps from the sideline.

UU began to regain some of their early dominance. Spraying the ball cross field with ease, they looked far superior to their opposition going forward. A number of corners in succession kept the pressure on UCC, with agile movement from the UU attackers testing the Cork backline.

UU pressed for a goal before the break. Taylor was in the thick of the action again, crossing to find O’Mahony unmarked at the back post. It was on a plate for the striker, but his slight connection guided the ball over the bar. The chance did, however, expose serious flaws in the UCC defensive set-up.

But as the game slowed down heading into half-time, UCC actually grew into the game, starting to stitch together some passing moves and showing some of the football that had tormented Trinity’s footballers a day earlier. Collins and Daniel Pender combined to create a shooting chance for Dave Dalton, but the midfielder’s low shot was well saved.

UCC emerged for the second half focused, playing with an intent that had been missing in the first. Collins and Dalton looked particularly threatening going forward.

There was a bite to the game that reminded all present what was on the line. An altercation between Nedas Maciulaitis and Gordon Walker sparked uproar in the UCC dugout, but the referee was not interested in pursuing any disciplinary action.

UCC’s first chance of the half fell to Dalton, after Rian O’Sullivan’s header from midfield set him loose on goal. His toe-poked effort, though, dragged agonisingly wide.

UCC’s weakness at set pieces came back to haunt them on 65 minutes. Taylor’s delivery from a corner was met by McGinley – one of a number of unmarked UU players – at the back post and he found the net to put the Ulster side in the driving seat once again.

UCC became desperate as their hopes of a Collingwood double began to dwindle. Malicious tackles began to creep into the match, and yellow cards were brandished.

UCC forged a half-chance in the form of an indirect free-kick as the minutes ticked away, but O’Sullivan’s shot was blocked down by a UU defence unwilling to relinquish their lead.

UCC continued to press. Shouts for a penalty after a foul on Ethan Hurley were ignored, with the referee instead awarding a free just outside the area. UU looked to be struggling under the intensity of the tie – with only two substitutes at their disposal, the Ulstermen looked stretched. But they survived. Conor Bowdren’s delivery was poor, and Cork looked to be running out of ideas fast.

Deep into added time, 20 out of 21 players were in UU’s half of the field. Several free kicks and hopeful deliveries later, UCC were still behind. Despite throwing everything at their opponents, Cork could not come up with the answers. The full-time whistle confirmed their exit, with UU marching on to face DCU in the Collingwood final.

Speaking to The University Times after the match, UU coach Stephen Small praised the performance of both sides, but said he thought the right team came out on top: “I thought it was a fantastic game, full-blooded, loads of quality. It was probably the best game of the tournament so far.”

“Both teams deserve a lot of credit, on a pitch that isn’t conducive to good football, I thought it was a fantastic game of football, and typifies the Collingwood Cup. We’re just glad to have won the game. I thought we deserved it.”