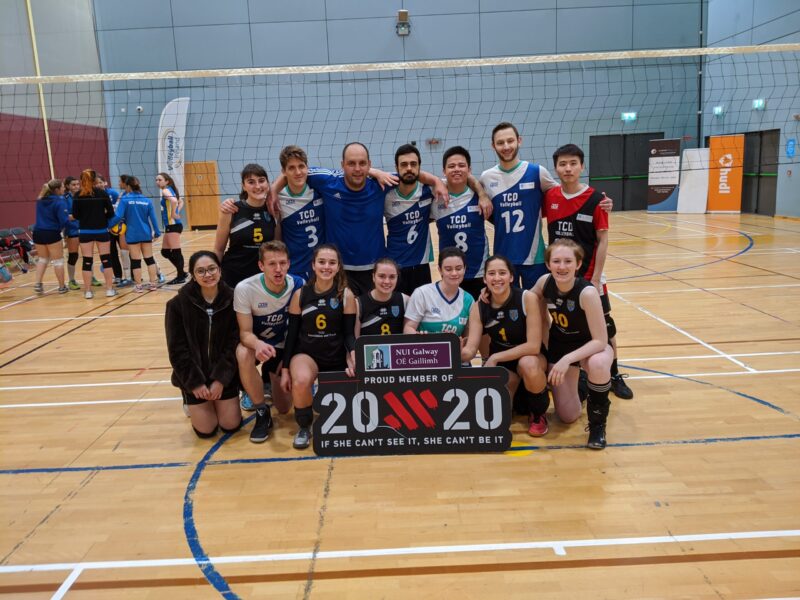 With her team ahead 24-20 in the fourth set, Trinity’s Mieke DuMont did what she had been doing all match long: smash the ball into the hardwood. There could not have been a more fitting conclusion to Sunday’s Volleyball Ireland Premier Division tie between Trinity and University College Dublin (UCD).

DuMont – whose scorching spikes elicited a raucous reaction from the UCD bench with every dig – was the best player on the court, and it was her performance that led Trinity to the 3-1 upset win at the UCD Sports Centre.

“That was great”, Trinity coach Mamen Jimenez told The University Times afterwards. “Individually, they are great players … it was all about getting all into one and they actually managed to do that today.”

The first set, however, did not go Trinity’s (3-6) way. UCD (6-3) battled back from an early deficit and forced Jimenez to use her first timeout with the score tied at 10. The timeout did little to help Trinity, though, as UCD – one point off the top of the table entering the clash – took the set 25-21.

The back and forth continued into the second set. Trinity again had the upper hand early, racing out to a 6-0 lead, before UCD clawed back to make the score level at 14 all. Jimenez used another timeout to try to right the ship, but again UCD seemed to benefit from the stoppage.

Already down a set and with the scoreboard reading 18-14 in favour of UCD, things looked dire for Trinity. It was Marika Puhar who brought the team back into the game.

Puhar, who had three aces to help Trinity jump out to the 6-0 lead earlier in the set, added a couple more as Trinity went on a 5-point run to lead 19-18. The team kept up the pressure, and a DuMont kill gave it a 25-22 set win and brought the teams level after two sets.

In the third set, the two rivals again found themselves level at 14. This time, though, it was Trinity that pulled away, using DuMont’s serves and another 5-point run to lead 19-14 before UCD called timeout. It was too little, too late, however, as another Puhar ace gave Trinity a 25-17 set win.

Trinity continued the momentum into the fourth set, quickly garnering leads of 7-1, 10-3, and 13-6. UCD, however, wouldn’t go down without a fight and used a nine-point run – the longest of the game – to jump ahead 15-13.

Trinity had an answer, in the form of an eight-point run of their own that was interrupted by a couple of timeouts from a desperate UCD team, their backs against the wall. The timeouts didn’t faze Trinity, and DuMont’s final kill gave Trinity a 25-20 set win and the match.

“It was a great game to watch”, Jimenez said. “Really enjoyed that.”

Trinity’s next fixture is against Dublin Volleyball Club Lions, where they’ll look to build on their resurgence late in the season.