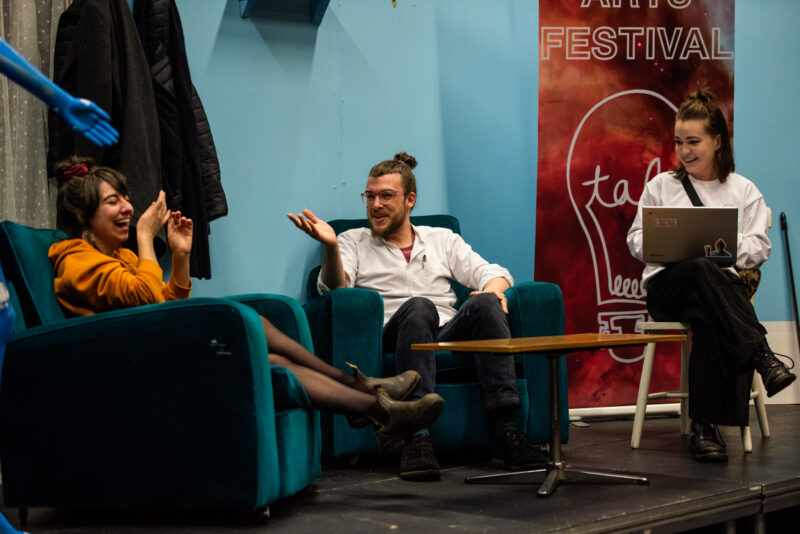 The pair treated the audience in the Players Theatre to a vibrant, energetic and witty afternoon as they explored their careers and the state of modern Irish comedy. With experience across various mediums – from Instagram sketches, television acting, stand-up shows and performances at both Dublin and Edinburgh Fringe festivals – the duo had a lot to cover.

At an event starring the creators of shows such as Symphony of Worms and Shitshow, it was perhaps unsurprising that the atmosphere was irreverent and entertaining. From the outset, while being introduced by TAF organiser Sorcha Ryder, Cantwell and Mamalis were trading friendly jibes about their achievements. With their anecdotes and asides, they worked well off each other, demonstrating the comedic interplay developed through shared performances in comedy troupe Dreamgun.

Touching on their entry to comedy and performance, both described an unorthodox initiation. Upon hearing people laugh at her show “The Egg is a Lonely Hunter” Mamalis was asked to a comedy night and, with a “yeah fuck it, I’ll give it a go”, a new door opened to her. Cantwell joked of early days in London with routines summarised by “hey I’m Irish and … I’m in the IRA” until a breakthrough with weird and wacky internet personas that made full use of the best parts of social media.

But it wasn’t all laughs, as the conversation did turn to the potential negatives of the comic career path, including the fear and isolation that can come with standing alone before a scary audience. The stage of a solo show is an inherently lonely place and the build-up isn’t particularly fun – Cantwell said that “it ruins your whole day”. In a moment of hilariously brutal honesty, Cantwell declared about most major comedy events that “this whole festival would fall to the ground if parents loved their children more!”.

Addressing the prospective comics in the audience, Cantwell advised bringing as many friends as possible to a first gig, though he admitted having done the opposite himself. Mamalis agreed: “I didn’t want anyone to fucking know!” The overwhelming message was that experience is the only way to progress. Referencing her first years at Edinburgh Fringe, Mamalis stressed the need to balance the energy and adrenaline of performance with the practical needs of food, space and privacy – and a place to cry peacefully.

Neither comedian’s path to success was particularly encouraged by the traditional Irish entertainment industry, and it was unsurprising that both emphasised the failings of the national broadcaster in providing a platform for new and exciting comedy. Cantwell, famous on Instagram, painted a tragic picture of a forced emigration of talent due to the lack of opportunities offered by RTÉ. He described attending an event called “How to Make Comedy Actually Good”, which seemed to promote Republic of Telly duo Damo and Ivor as the pinnacle of success.

Ultimately, both comics argued that self-confidence is crucial – Mamalis said that “you’ve gotta be a fan of yourself as well, guys”, while Cantwell brought the talk to a fitting conclusion: “No one’s really going to give a shit, so honestly the stakes couldn’t be lower.”