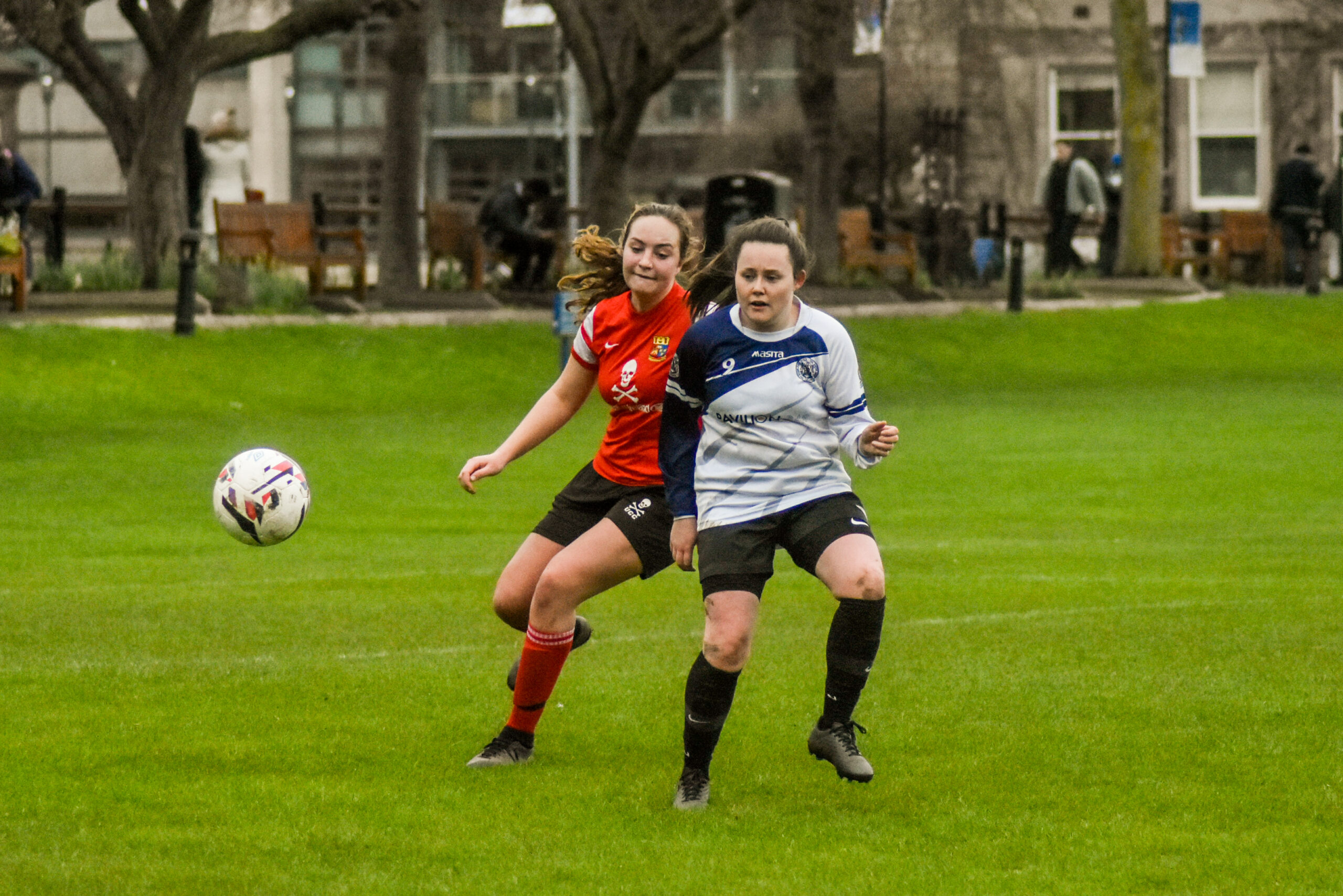 Fiachra Gallagher for The University Times

Trinity Women’s Soccer booked a spot in the semi-finals of the Colleges and Universities Football League (CUFL) in style today, after dishing out a 12-0 drubbing to University College Cork (UCC) B in College Park.

Trinity, free-scoring all season, did the bulk of the damage in the first half, bagging 10 goals in the opening 45 minutes of an extremely one-sided affair. The usual suspects – Aoife Robinson, Sadhbh Doyle and Amelie Spliesgart – were among the goals.

With just two minutes on the clock, Trinity were already one up. A cross whipped in from Spliesgart found the feet of captain Frannie Smith, and her hopeful connection was fumbled over the line by a clumsy UCC defence.

After seven minutes, it was 2-0, when Ella Hensey latched on to a cross that UCC failed to deal with. Running at pace, the right-back smashed it along the slippery surface past Lauryn Murphy in the UCC net.

After a blitz early doors, UCC looked totally rattled at the back, and things didn’t get any better as the first half went on. On the quarter-hour, Trinity had a third, with Spliesgart turning scorer after winger Amy Ewing threaded a deft pass through the middle.

Within two minutes of the kick-off, Trinity were in again. Spliesgart, running riot in attack, drove in a low cross that Robinson collected in space. Her first attempt came back off a post, but she was on hand to smash home from five years and make it 4-0.

Trinity’s attackers were purring with confidence now, operating in a different league to their beleaguered visitors. Spliesgart could have had a second when she latched onto a ball over the top, but she opted instead to make it a hat-trick of assists, squaring it to Robinson for the hosts’ fifth.

A sixth was inevitable. Ewing, urged by her teammates to shoot, was the scorer this time, with a strike that flew into the roof of the net.

Ireland international Sadhbh Doyle showed her flair for Trinity’s seventh. Left unmarked, Doyle was able to run unimpeded into UCC’s box and, with the keeper forced to come out and do her defenders’ job, showed her class with a stylish chip that rolled into the corner.

Robinson got her hat-trick 10 minutes before the break. At this point the Trinity team were lining up to shoot at the Cork goal, and if UCC’s Murphy did well to keep out Spliesgart’s effort, Robinson was on hand to dispatch with ease.

Remarkably, though, she wasn’t yet finished: within seconds of the restart, Trinity had won back possession and Robinson beat both the offside trap and the keeper to make it 9-0.

Cork, in dire straits, would have been desperate by now for the half-time whistle. But Trinity added a 10th before they could get to the break, with Doyle tapping home on the rebound after turning two Cork defenders and striking at goal.

With the game long won, Trinity made changes in the second half. Doyle was taken off – presumably to be rested for the inevitable semi-final tie – and replaced by Ali Flaherty in the middle. Trinity also made a change between the sticks as Catherine Thiltgen replaced Tess Pursur.

The second half started in a similar fashion to the first, with Spliegart getting the side’s 11th within minutes of the restart. The right-winger pounced upon another loose ball and cunningly dispatched in the near right-corner.

The second half saw a real turn in the weather – perhaps a blessing in disguise for the visitors – as the blustery conditions slowed down Trinity’s onslaught.

Late in the game now, Robinson finally got her fifth after a slew of missed chances. A brilliant ball over the top caught the Cork defence napping, and Robinson did what she did best, capping off another fine performance for her and her team.

Trinity Women’s Soccer continue to be a relentless and untouchable force in university football. They now march on to the semi-finals of the CUFL, with no reason to be fearful. They’re without a doubt the team to beat this year.

The draw for the semi-finals will take place this Friday.