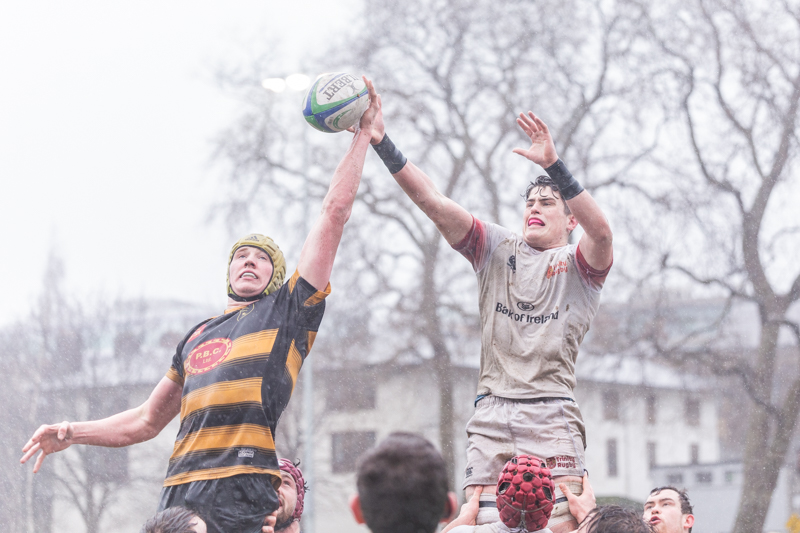 Both sides struggled the entire match to get their hands on the ball. The rain did not let up for the entire 80 minutes, and neither team was able to get points on the board in the second half. Young Munster, though, took their chances in the first period, which ultimately proved enough to condemn Trinity to their second loss on the bounce.

Trinity held early possession as Storm Dennis battered College Park, but it was the visitors that had the ball over the tryline first. After intense pressure in the Trinity 22, Alan Kennedy dived over to open the scoring. Evan Cusack converted to add the extras.

Trinity controlled play in the aftermath of Kennedy’s try. Despite surrendering possession directly after the restart, DUFC secured the ball after an attempted clearance was blocked down. Trinity moved into the away side’s 22, moving the ball as quickly as the conditions would allow.

Rob Russell tried to wriggle through the Young Munster defence in the corner, but the gap quickly closed. DUFC eventually had to settle for a penalty after several phases of play, with Michael O’Kennedy on hand to convert and make the score 7-3.

Young Munster were quick on the trigger after the restart, when the ball squirmed from the grasp of several Trinity players scrambling for possession. Young Munster attackers dived on the loose ball, with Conor Bartley providing the crucial carry beyond the five-metre line. Sean Rigney finished the move and Cusack converted, making it 14-3.

Young Munster were in again directly after the restart. Cusack, clearly in form, showed incredible vision to pick out Luke Fitzgerald, who collected in the air and charged for the tryline. Topping off the score he created, Cusack added the conversion and, just like that, Trinity were 18 behind. 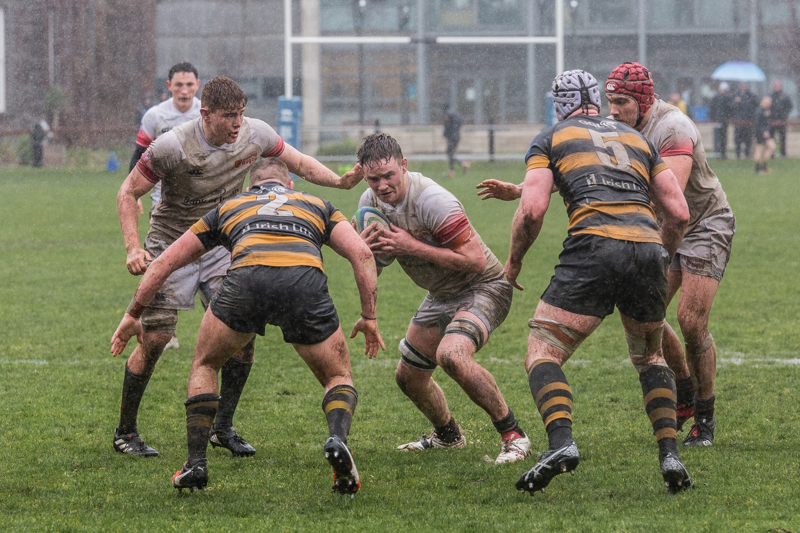 The conditions prevented Trinity from getting into their groove.
Ivan Rakhmanin for The University Times

With half-time approaching, Trinity looked to mount a belated response and, after some good play in midfield, the hosts secured a lineout in the away side’s 22. An attempted kick in behind was snuffed out, but the referee pulled play back for a Trinity penalty. O’Kennedy’s kick was good, bringing his personal tally up to six.

Both sides exchanged hopeful kicks in an attempt to gain territory in the final minutes of the half. Trinity found themselves in the Young Munster half in numbers, with Colm Hogan leading the charge for the line. DUFC forced another infringement, meaning O’Kennedy needed to step up again and close the gap. He obliged, leaving it 21-9 going into the break.

The second half saw both sides attempting to retain possession but neither having much joy. Trudging through puddles of water scattered around the drenched surface, Trinity struggled to implement their preferred style of running rugby. Young Munster’s physical dominance stood to them as both sides slogged it out in the scrum.

Trinity enjoyed some success in midfield, with some moral victories in the breakdown pointing to a potential comeback. Edging towards the line after securing a lineout in the Young Munster 22, Trinity picked away at the away side’s defensive resistance. An inevitable knock-on ended the chance, however, with Jordan Stewart and Charlie O’Doherty combining to clear the lines. Trinity looked to push forward immediately, but Fitzgerald dug deep to rally his team mates again. Trinity were still in search of their first try.

Trinity held the majority of the possession in the second half. They continued to press the Young Munster defence, with a number of lineouts in dangerous positions threatening a precariously lead. On one occasion, Mark Nicholson went short with a lineout that was intercepted, allowing Trinity to slog for the line. Bart Vermeulen was at the centre of the action as they heaved on in the rain, but despair reigned after another infringement ended the assault.

This situation occurred more than once in the match – Trinity had enough possession seize control of the match, but loose balls and heavy limbs hindered any progress from being made.

Hogan, Johnny McKeown and Gavin Jones were involved as Trinity made a final push for the tryline. James Fennelly, introduced for the final moments of the tie, tried to find Russell with a lob towards the corner. Although the pass was cut out, Trinity won the scrum after a knock on. Pushed back towards the 22-metre line, Trinity moved quick to head back towards the line. The ball wouldn’t co-operate – play broke down again, and the tie was all but settled.

The rain began to ease just in time for the referee to blow his whistle. The full-time score was 21-9.

DUFC may now have cause for concern. With an ever-rotating team, Trinity just cannot find their rhythm this season. Still rooted to the bottom of the AIL Division 1A table, they must travel to Ballynahinch next week for what will be a crucial tie in the battle to avoid relegation.