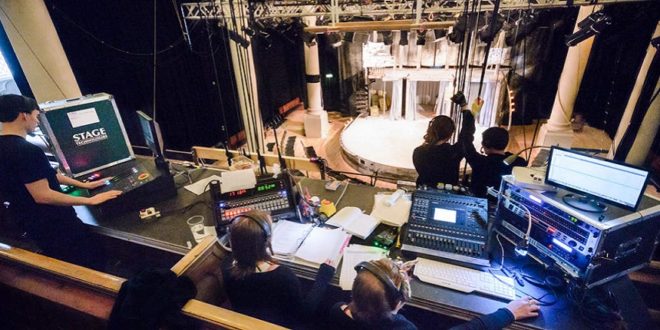 Stage management is a discipline that is mostly shrouded in mystery, yet still remains an indispensable part of the theatre-making process at both a student and professional level. Stage managers are responsible for everything from booking rehearsal rooms to keeping a master copy of the script with technical cues, as well as organising movement cues and line changes.

By speaking to both Danny Erskine, the Abbey’s company stage manager, and Aksana Frane, a student stage manager working mostly in the Players Theatre and the Samuel Beckett Theatre, it’s possible to gain an insight into how the role works in both small and large productions.

Speaking to The University Times, Erskine explains that the broadness of stage management is largely the reason that it has remained mysterious. He explains: “We’re the pinch in the hourglass. You have one side with all the creatives, then on the other side you have the people who practically put the creation into place. In the middle you have stage management, who have to have the ability to compute this creativity into a practical sense.”

This is clearly a vital role in the production of any play – being able to realise the vision of a creative team and make it into something practically viable.

But stage management often means “forming bonds with the actors, which is really nice”. By contrast, Erskine says the best part of his job is technical rehearsal. During this period, the technical and creative elements collide: “There’s this crash where no one can see anymore what the production is, and I love helping being a part of making sure no one got too lost in that.” The role, as well as being intrinsic to putting a show on, is also clearly widely varied.

This variety of experience doesn’t just exist within each show, but is also dependent on what production a given stage manager is working on. Both Erskine and Frane agree that how much they like a play affects how enjoyable the work is. Erskine explains that working on plays you like makes all the difference: “You’re aware you’re part of something special.” Working on Loch na hEala (2016) was particularly exciting, he says.

“That’s a show that anyone who sees it says it’s the most special experience, there’s a pride in working on it.” Frane says that she was “lucky to not have a bad experience” working in either Players or the Samuel Beckett Theatre, but she adds that working on plays you enjoy is particularly special, because “you begin to care a lot for the script, and the production itself”.

It’s clear that this quiet role is not only vital to the production of any play, but can also be incredibly enjoyable. As Erskine explains, stage management is the pinch in the hourglass, allowing ideas and technical practicalities to become the productions we go back to again and again.