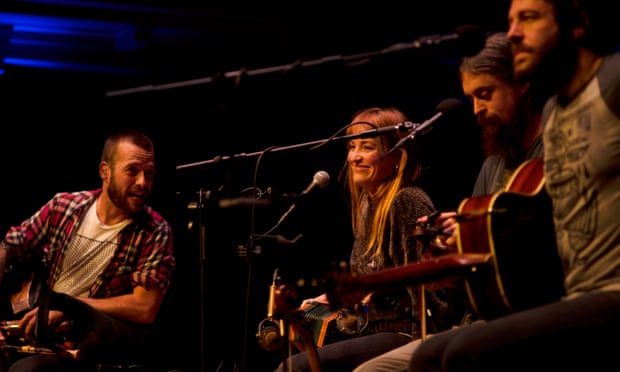 A quick skim through the Irish charts in recent weeks – and more specifically, the top 20 singles by home-grown artists – reveals an alarming state of affairs. The closest thing to some female representation in the entire list comes in the form of Picture This’s “Winona Ryder” or the 2 Johnnies’ “Sinéad”, with the likes of Dermot Kennedy, Versatile, the Script and, of course, the Coronas – the real virus we should be worried about – all featuring heavily.

Given this sad reality, you’d be forgiven for believing an RTÉ-hosted event celebrating Irish music might follow the same unsavoury path of aural tripe. Thankfully, the Choice Music Prize does things a little differently.

Established in 2005, the prize aims “to highlight those albums which deserve some extra time in the spotlight” and, ultimately, to award the album that best captures the year in Irish music. Selected by a panel of music media professionals, 10 albums are shortlisted annually with 2019’s list proving particularly strong. Surpassing the three-hour mark, the live event afforded each act the opportunity to perform three songs from their nominated-album, followed by a quick back-stage interview screened on stage.

Fresh off the RTÉ presenter merry-go-round, the truly insufferable Eoghan McDermott was tasked with presenting duties. His, at times, tone-deaf commentary and perpetual shouting threatened to distract from the essence of the night. But despite his best efforts, the music spoke louder than he ever could.

Trinity student and definite highlight Maija Sofia was first to grace the stage. Playing to her biggest audience yet, Sofia failed to let self-confessed nerves unsettle her as she performed songs from her highly-acclaimed debut Bath Time. Backed by a gorgeous three-piece accompaniment, Maija hushed the crowd with soft and understated arrangements that enabled her voice – or rather, her stories – to take centre-stage.

The three songs she performed skipped from tales of Warhol-superstar, Edie Sedgwick to novelist Jean Rhys, and lastly, to the murdered Bridget Cleary. Writing about and from the perspective of these women, Maija gives voice to the lost and marginalised in a dreamy, melodic fashion.

Refreshingly, Bath Time is not the only album on the shortlist to adopt this song-writing style, with Lankum’s The Livelong Day also telling stories of disparate and disparaged women of the past.

Songs like their re-imagined version of Appalachian tune “Katie Cruel” and the painstakingly beautiful “Hunting the Wren” – about the women of the Curragh in 19th-century Ireland – breathe fresh life into some of the forgotten annals of history. Radie Peat’s distinctive vocals are layered over a droning, cinematic and, at times, apocalyptic wall of sound. It’s truly special.

After supporting Lankum at their most-recent Vicar Street gigs, crowd favourite and fellow debutant Junior Brother also took to the stage to perform songs from his nominated album Pull the Right Rope. Clad all in red, the Kerry man stole the show with his impeccable guitar-playing, winding voice, wit and all-round rowdiness. In between songs, he expressed gratitude to the audience and general listening-public for their support, followed by pleas for their money and pints. As he left the stage – after a rousing, feet-stomping rendition of “Full of Wine” – the audience seemed unanimously in agreement that he was entitled to both.

Other nominees and performances included the charismatic Jafaris, Sorcha Richardson, SOAK, Mick Flannery, Daithí and the most globally successful of the lot, Fontaines DC, who put on a highly energetic display. Unfortunately, two of the shortlist’s big hitters, Lankum and Girlband, were unable to perform due to prior touring commitments.

In their absence, the audience was treated to the rather surreal experience of watching some of Bob Gallagher’s respective work with each act, through screenings of his equally excellent, but unnerving, music videos “Going Norway” (Girlband) and “The Wild Rover” (Lankum).

To conclude the night, the winners of both best song and best album were announced. As voted for by the public, Westlife were victorious in the best song category with “Hello My Love”. The boyband, by triumphing over the likes of Róisín Murphy and Lankum, confirmed what we already knew: democracy does not work.

However, there could be no qualms at the end of the night the “best album” category was justifiably awarded to Lankum’s The Livelong Day. Accepting the award on the band’s behalf, manager Cian Lawless gave a touching speech in which his pride was palpable. A band with enormous respect for tradition, Lankum have been bold in their attempts to rejuvenate and reinvent, and it’s paid off – to the tune of €10,000, to be exact.

During the exodus, as “The Young People” reverberated through the speakers, not even the knowledge of Louis Walsh’s presence at the event could shake the patriotism that Lankum’s music stirs within. At the end of the night, the prevailing feeling is that Irish music is in pretty safe hands as long as we keep Lankum at the helm of the ship.