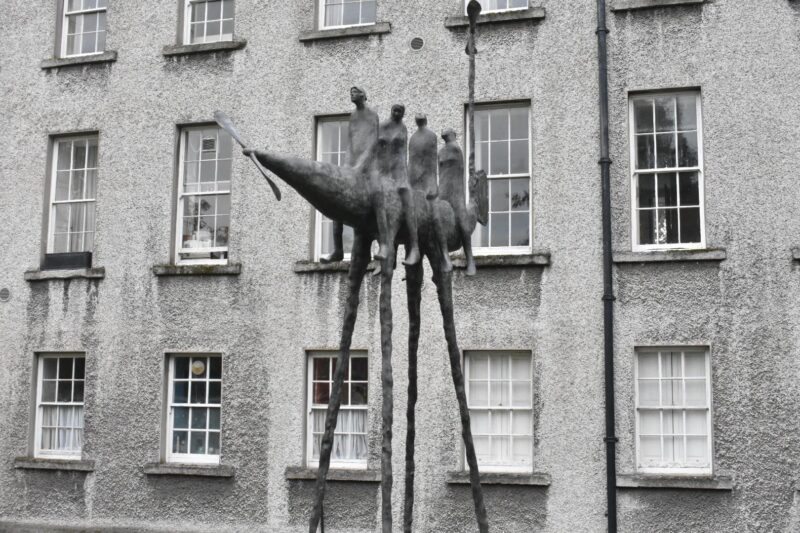 As Trinity students, we walk past high-profile works of art every day as we trudge to the library or rush to class. It’s easy to become desensitised to the array of delights that Trinity has on display, but an artistic acquisition installed in 2019 encourages students to stop and look up.

Installed on campus in autumn 2019, Failing Better is a towering bronze sculpture designed and crafted by Irish artist Rowan Gillespie. Commissioned by Trinity, the piece can be found at the axis of New Square, the Rubrics Building and Botany Bay.

Gillespie, a Dublin native, studied at the York School of Art and later at the Kingston College of Art, London. You may recognise one of his most famous works, Famine, on Custom House Quay in Dublin. In his Dublin studio, he uses exclusively bronze for his sculptures, and every aspect of the creation of his sculptures – from moulding to installation on-site – is done without assistance, which lends itself to the personal and autonomous nature of his sculptures.

Gillespie’s work centres mainly on what he calls his “family of people”: humanoid figures ranging from classical heroes to dancing couples. Since 1989, he has created site-specific pieces, initially in Ireland and then around the world.

Why Should I Care?

This sculpture, of a “flying machine”, depicts a horse growing wheels and a propeller, mounted by figures urging it to fly. A piece by one of Ireland’s most eminent artists, Failing Better is another jewel in Trinity’s already sparkling artistic crown.

Gillespie said that the sculpture was partly inspired by Trinity’s links to the aviation industry – apparently there are many – including flying experiments by a physics professor undertaken here in the 19th century. In the artist’s description of the sculpture on his website, he says he has always been fascinated by flight, with his head tilted constantly towards the sky while growing up. It is interesting to note that in order to see the finer details on Gillespie’s work, one must, like a young Gillespie, look up.

The title of the sculpture is a nod to Samuel Beckett’s 1983 play, Worstward Ho, which is the source of Beckett’s famous words: “Fail again, fail better.” The artist said that the sculpture is rooted in the idea that all advancement stems from failure, and that innovation itself consists of “failures which gradually improve, failures inching towards success by inspired vision”.