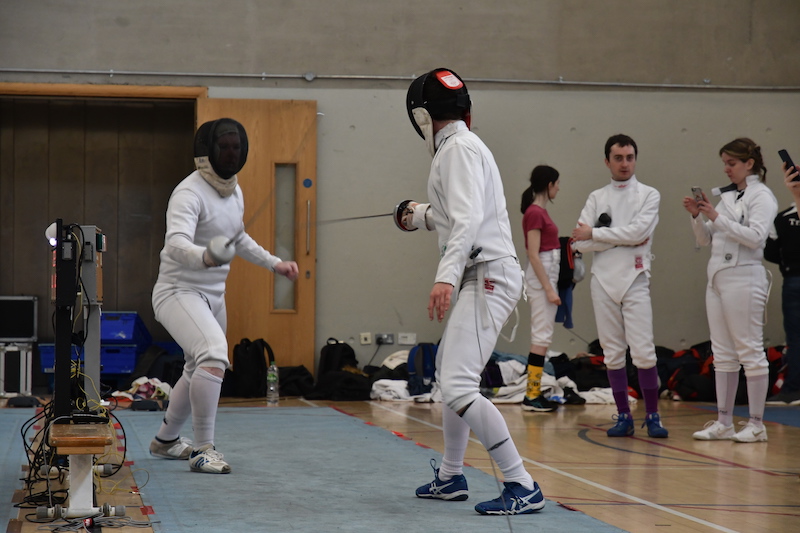 Just before the tidal wave of coronavirus swept Trinity (and all else), Dublin University Fencing Club (DUFC) managed to sneak in the small feat of securing their 13th consecutive victory at the Irish Fencing Intervarsities.

But for all the echoes of the past these are unprecedented times. For Dearbhaile Collins – current club captain alongside Stephen Grogan – DUFC were lucky the competition went ahead at all. “Everyone keeps saying how much everything has changed since last week. Like, if it had literally been a day later we probably would have been cooked.”

With uncertainty in the air, Grogan insists that the build to the intervarsities was as focused as ever: “About a month beforehand the club implements a drinking ban. No alcohol for anyone who may be involved with teams and usually people in the club won’t drink as well in solidarity. This makes sure that people come to training – especially our early morning sessions. It was something that was brought in a few years ago by a previous captain that we’ve kept on.”

About a month beforehand the club implements a drinking ban. No alcohol for anyone who may be involved with teams

A month-long drinking ban seems hard to fathom for the everyday student, but as Collins adds, the intervarsities is what the entire club is built around. “I guess the whole structure of the club is geared towards intervarsities. The squad is set up purely with the goal of winning intervarsities every year.”

This year, DUFC took home trophies in four of six categories at an event held in Dublin City University (DCU). They were victorious in women’s sabre, women’s foil, men’s sabre and men’s epee. They also placed second in the men’s foil and third in women’s epee.

Since the competition’s inception in 1955, DUFC have won a staggering 43 times out of a possible 65. This has earned Trinity a reputation as the villains of the university fencing scene, as Collins takes great glee in pointing out to me: “There’s this whole thing of people supporting either side of the piste at intervarsities. All the other universities will crowd the other side of the piste for whoever is fencing against Trinity to give them support.”

They’ll be hosting the competition next year and will be confident of making more history. But despite their recent dominance, Grogan insists that their rivals are not far behind them: “There is definitely very fierce competition at intervarsities. The bigger teams – UCD, Cork, Galway – they’re always looking to break our streak. There are high tensions, especially when it’s between us and another of the big colleges. Everyone is at that piste watching, waiting to see what is going to happen. We can never get complacent.” 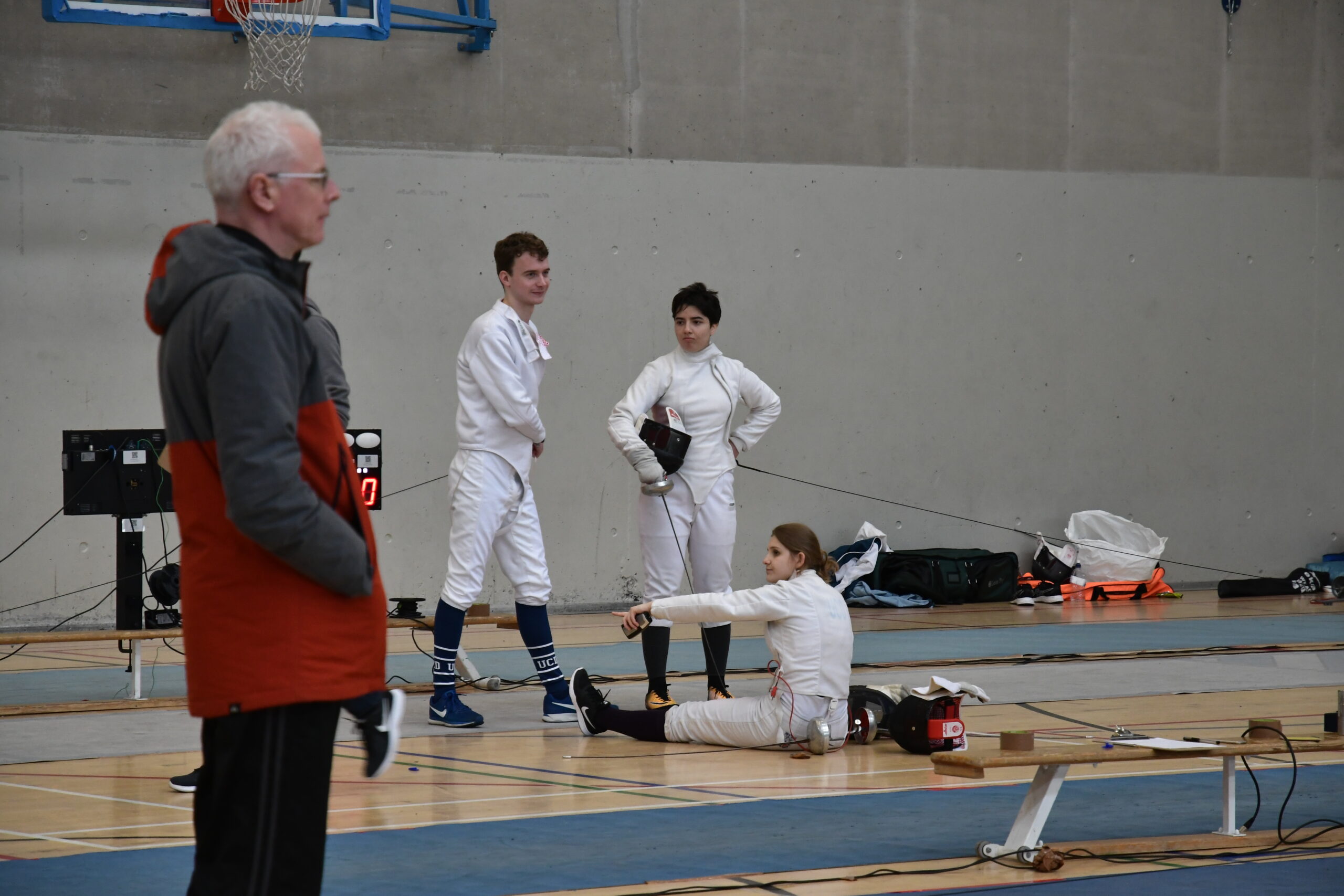 DUFC say their continued success is the result of hard work and camaraderie – not a lack of competition.
Tara Kent for The University Times

So what is the secret? Well, unfortunately, there isn’t one. Anybody looking for shortcuts to success won’t find them here. Hard work and a culture of camaraderie are at the epicentre of DUFC’s prosperity, Grogan says. It’s “a consistent drive within the club of working hard. It’s always tough to nail down one thing behind it all”.
“Coming to training, being there for other members, going to competitions, taking care of yourself, making sure that study is overwhelming you. It’s a lifestyle of consistently working towards a goal.”

Collins agrees: “I would put it down to work ethic as well. One of the main things that people shout in support on the piste is ‘keep working’ and I think that’s the whole culture of the club. Keep training, keep trying. Keep working.”

DUFC, one of the elders of Trinity sport, were founded in 1774 and the link between past and present is as strong as ever in 2020. Current coach Dr Colm Flynn fenced for Trinity as both an undergraduate and a postgraduate. He is also the development officer for Fencing Ireland. Collins is quick to attribute some of the growth of the club to him: “He is one of the most high-level coaches we have here in the Republic. I think he is a big factor in the club’s success.”

Each year the club hosts an alumni day. They hold a past versus present match and finish the evening with an alumni dinner, where the old mingle with the new, and as Grogan puts it, “reminisce about the club and re-live the old days”.

Alumni are a source of funding for DUFC, Grogan tells me: “Usually they donate what they can. We’re lucky that we have a lot of successful alumni – career-wise – around the world who can give back to the club. A lot of members will donate gear that they won’t be using anymore.”

I ask them why they think fencing has a reputation of being inaccessible, overly technical and arcane. Grogan says that while the reputation exists, it is completely inaccurate: “I’ve definitely found from meeting new people each year that fencing is completely different to what most people perceive. There are a lot of rules and techniques that a lot of people won’t be familiar with at the start and will take a long time to get used to. We are always trying to make it more accessible.”

Despite this, DUFC have no problem attracting members each year, as Collins points out: “I was working it out with one of our fencers on the way back from varsities – 18 of the 25 fencers on the team this year had started to learn fencing in first year, with Colm as their coach. We’ve had people who have gone from being a beginner to winning national championships.”

She continues: “Earlier on this year we had quite a few medals at the biggest novice competition of the year and everyone was super proud of all the people who did well. There is a real culture of supporting novice fencers at these competitions as well. The club puts a big emphasis on it so lots of older fencers will come along to it and give advice and cheer them on.”

Grogan can testify to this ethos: he only started fencing in his first year in Trinity: “There was something about the atmosphere and the support as a new person that sucked me in.”

Both will say a bitter-sweet goodbye to DUFC this term and Grogan is proud of how the club has grown “exponentially” during his time there: “We’re recognised as a high-performance sport, so we have access to the high performance gym and a bunch of our athletes train there twice a week. We have some fencers and alumni who have gone international. Then of course wheelchair fencing has been developed, so it is always growing.”

Given their current levels of success, if DUFC is growing “exponentially”, it should certainly put their rivals on notice.