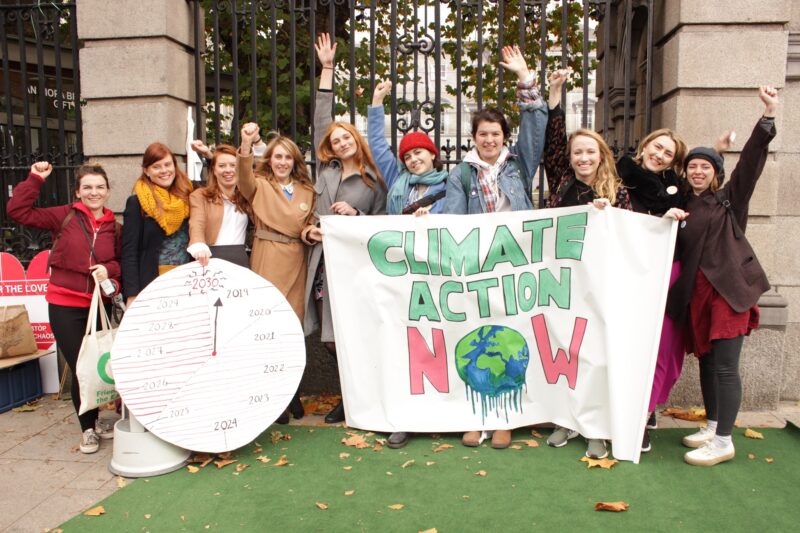 Ecofeminism is a term originally coined in the 1970s by the French feminist Francois dʼEaubonne, to describe the intersection between environmentalism and feminism. These days it has become a growing social movement. The Dublin Ecofeminists – an ecofeminist group that sprung up almost by accident three years ago, and now has hundreds of members across various social platforms – are a standout case of this emerging synthesis.

Ecofeminism, I hear from Tríona Reid, a member of the Dublin Ecofeminists, is a fluid concept that can be “interpreted differently, and can mean different things to different people”. April Keane, who’s also in the group, cautions with a grin that “we probably have different definitions even ourselves”.

Reid carefully explains the term : “Feminism is feminism, and then youʼve got the eco side, environmentalism. But thereʼs a crossover between the two, in which you can see the link between how nature has been exploited, and how so too have women.”

The Ecofeminists see this parallel – between the violation of the planet and the oppression of women – as a consequence of nature, as a whole, being under patriarchal rule. “The main thing to take out of it is that thereʼs an exploitation of the relationship that we have with the earth in the same way that society often has with women”, Reid says. Intersectionality is the cornerstone of the ecofeminist movement and, as Reid explains, “you canʼt properly look at environmentalism and not think about the way it impacts migrants and lower income families and women”.

Feminism is feminism, and then youʼve got the eco side, environmentalism. But thereʼs a crossover between the two

Reid has “been around since the start”, she says – or three years ago, when the group was set up after some members attended an ecofeminism workshop held by the Galway Feminist Collective in the Cloughjordan ecovillage. Supported by Friends of The Earth, the workshop was so successful that a new group was born: the Dublin Ecofeminists – a grassroots group that meets on the second Thursday of every month in various locations around the city (though KC Peaches seems to be a consistent favourite).

Keane joined the group two years ago, one of many new members who joined in the leadup to the referendum to repeal the eighth amendment. And, after a successful campaign – in which the Ecofeminists played a big role, raising funds and participating in protest marches – some women who had become politically empowered during the referendum suddenly needed a new outlet for their activism. For many, the answer lay in the Dublin Ecofeminists.

To the uninformed, the obvious question when it comes to ecofeminism is why climate change is a feminist issue. Part of the answer is that it fundamentally disproportionately affects women. Women work two thirds of the worldʼs working hours, produce half the worldʼs food and make up 80 per cent of the agricultural sector on the continent of Africa.

Yet women only earn 10 per cent of the worldʼs income, lack land rights and only own a tiny proportion of the worldʼs property. Of the billion poorest people on the planet, women and girls account for 70 per cent. They’re also 14 times more likely to die in ecological disasters than men. In most parts of the world, women hold traditional roles as the primary caregivers in families and communities – and, as the main providers of food and fuel, they’re more vulnerable when flooding and drought occur. UN estimates suggest that 80 per cent of those who have been displaced by climate change are women. 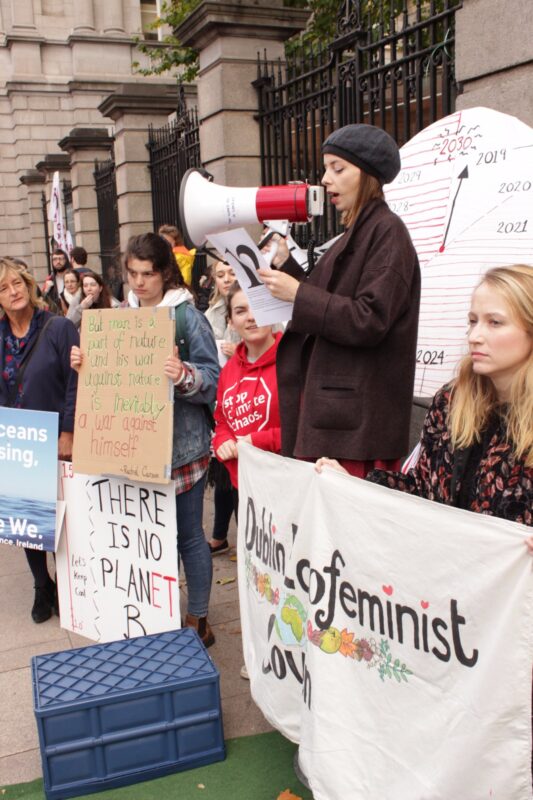 The Dublin Ecofeminists aren’t just arguing for economic and social change – they’re also fighting on a cultural front. There are many different views within the organisation, and some argue that a more “feminine” approach – more co-operative, less competitive – is what’s needed. But there’s space within the group for different viewpoints: while some members take a more philosophical approach, others are more radical and some are involved in direct action movements like Extinction Rebellion.

They’re reluctant to align ecofeminism with a particular political ideology, but as Keane puts it: “I donʼt think you can be pro-destruction of the earth and left, or a feminist and right.” When I put it to her that feminism and environmentalism have traditionally been part of a left-wing fight, she simply says: “I think both should be mainstream.”

Three years on from its establishment, the group has now built itself into a sizable community. There are no conditions for membership – people can engage as much or as little as they want. Reid says that “some people engage online, some people come to meetings, some people organise events – thereʼs a huge variety of ways people engage”.

Because their membership is so varied, the Dublin Ecofeminists intersect widely with other activist groups. “We have a lot of politically minded people in our group and thatʼs their interest”, says Keane. “For some people it’s a much more social thing. But for a lot of women in our group itʼs much more of a spiritual connection with the earth and thereʼs still solidarity amongst us all.”

While the group is vocal in its opposition to the political and social structures that have excluded women for generations – a foundation that has led the planet into crisis – it is not by any means anti-men. Keane and Reid say that men are welcome to attend any of their meetings, and enthusiastically point out that several men came to the recent workshop they held on campus in Trinity.

Besides their monthly meetings and university workshops, the Ecofeminists have run all sorts of events – from a book club to a film series as well as a discussion evening with BirdWatch Ireland. They also host an annual Samhain party at Halloween, and have a consistent presence at social justice events – from Dublin Pride to anti-fracking protests, and from school strikes to protests against Turkish invasion in Rojavaat at the Irish European Parliament.

Our meeting finishes with a forecast for the future of ecofeminism, about which Reid is optimistic. “I think ecofeminism is going to gain in popularity”, she says. “All social movements are gaining popularity – certainly in the global north, more people are getting politically active.” And Keane, returning to the intersectionality that underpins the Dublin Ecofeminists, adds that “people are no longer working alone or fighting issues from one perspective. People are coming together, and that creates more opportunity for growth in ecofeminism”.