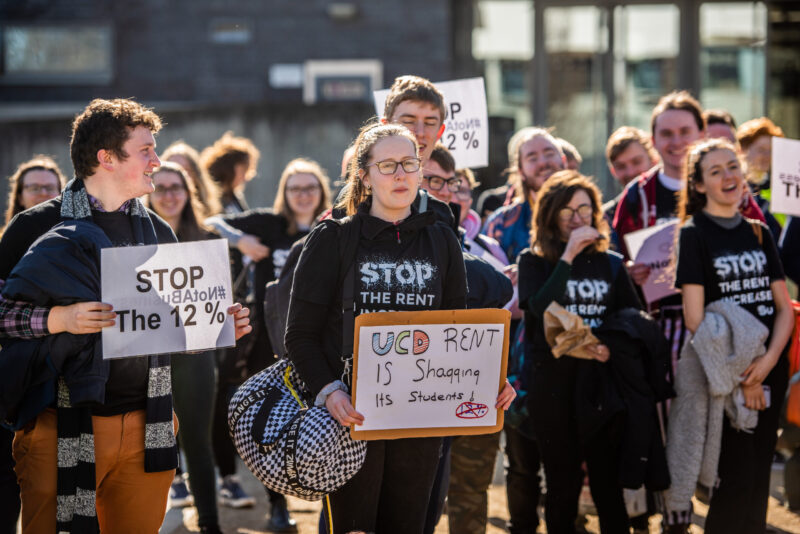 University College Dublin (UCD) students today attempted to storm the college’s Club Restaurant in protest at campus rent increases, with a tense standoff between students and security marking the latest in a series of demonstrations in recent weeks.

Around 100 students, led by University College Dublin Students’ Union (UCDSU), gathered at the college Quad before marching to the restaurant while calling for an end to a 12 per cent rent increase over the next three years.

Andrew Deeks, the university’s under-fire president, wasn’t present at the demonstration. Protestors chanted: “Andrew in your ivory tower, this is called people power.”

At the restaurant, the demonstrators were turned away by security and continued to picket outside. “Fuck your latte”, went the chants.

In a press statement today, UCDSU President Joanna Sierwierska said the rent increase “is symptomatic of the university’s priority to attract more international fee-paying students and maximising the income that can be extracted from them, in order to fund campus investments”.

She added that the decision is “contrary to the University’s commitment to equality, diversity and inclusion (EDI) and it will have a particularly adverse effect on student groups who are already underrepresented in higher education”.

But if he’s faced notable opposition, then Deeks has shown no sign of backing down, describing students’ response as “emotional” in an interview with the Irish Times.

This protest follows a large number of demonstrations across the country, as students in a slew of colleges protest proposed and confirmed rent increases. Last Thursday, Trinity students occupied Front Arch in protest at possible rent increases.

In an op-ed for the Irish Times yesterday, Provost Patrick Prendergast hit back at the idea of college-subsidised accommodation for students, asking: “Why should students living in flats or at home subsidise those living in university accommodation?”

Prendergast highlighted the imbalance of demand and supply of on-campus student accommodation, saying that “in Trinity we have almost three applicants for each space”.

Beston said: “I find it shocking that the provost cannot equate issues such as a rental increase to their impact on student services and welfare”, adding that his comments are “hurtful and eye opening”.