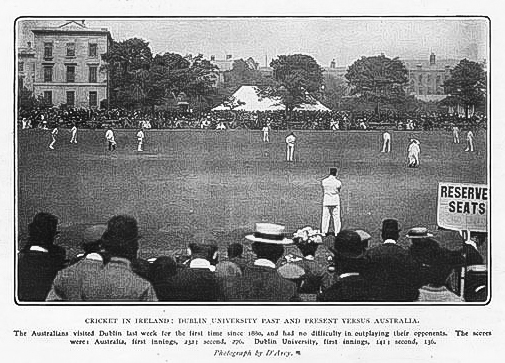 A bright and sunny Monday afternoon in June 1905 was the setting for one of the most enduring displays of athletic prowess that College Park would see in the early years of the 20th century.

The event was attended by 7,000 spectators, who donned their summer finery and travelled to Trinity to watch a Dublin University Cricket Club (DUCC) outfit take on one of the most famous and lasting teams in any sport – the Australian cricket team.

Australia took to the field amid the “Golden Age” of cricket. The Australian team at the time were widely regarded as one of the finest in history, with a cohort of players whose names are remembered to this day. For many fans of the sport, the likes of Victor Trumper, Tibby Cotter and Reggie Duff are synonymous with cricket royalty.

While the sparkling sunshine and glamour of the crowd may have set the stage for a game of the highest order, the cricket on display during the opening salvos of what would be a two-day test were lukewarm at best.

The underwhelming opening happened despite the Australians possessing what Gideon Haigh, the Australian journalist and author who many see as the finest cricket writer of his time, tells me was a “uniquely great concentration of talent”.

Frank Browning has long been a fascination. He was a great batsman for Ireland and Trinity

After winning the toss, DUCC took to the field and allowed the Australians to bat against them. Trinity, who didn’t possess the talent of the Aussies, were far more acclimated to the field and the way the ball was going to play that afternoon. While the Australian side may have felt at home in the Dublin sunshine, they were taking to the field mere hours after concluding their tour of the English cricketing counties and undertaking the trip across the Irish sea.

Reports in the Irish Times over the days of play tell the tale: “From the outset of their [Australia’s] innings, it was evident that none of the batsmen were ever really at home with the ball.” While DUCC fans may have held onto hope that this was due to a class of bowling so excellent that it shocked even the mighty Australians, the report notes that their bright start might have been attributed to Australia being “puzzled by the way the ball came off the pitch”.

While the opening partnership of the two legendary figures, Trumper and Duff, went for a respectable 44 runs and drew acclaim for “beautiful timing and placing of the ball”, the Australians bats “displayed none of the features of brilliancy we were led to expect” and a great deal of the fans in attendance may have felt put out by the lack of quality on display. 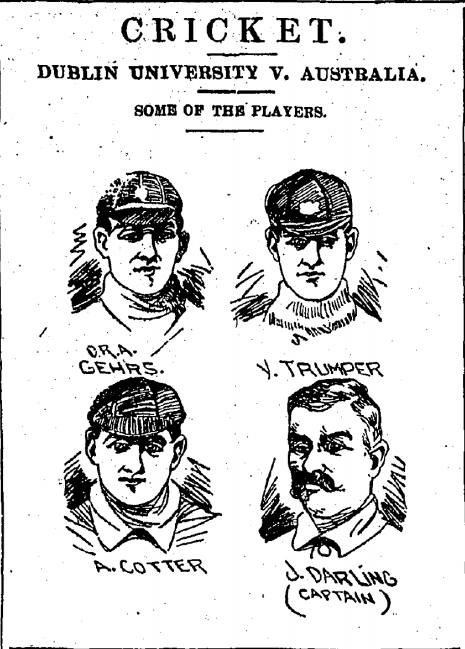 A drawing of some of the key players that featured in the Irish Times.

Despite the day’s underwhelming performances, Australian batsman Trumper does deserve to be highlighted as one of the main reasons why the mammoth crowd in attendance had made the trip to College Park that day. Trumper has gone down as one of the finest players in cricket history and drew universal acclaim for his style, grace and ability from his contemporaries, becoming a legendary figure within cricket.

Haigh, who has written extensively about Trumper, tells me that he “was the first player the English recognised as laying claim to elegance” – a massive show of respect, given that this was that period in which the seeds of the ferocious Australian and English rivalry were sown.

“What strikes one reading about Trumper now is the absolute uniformity of the views about him, as a batsman, and as a man – he was regarded as not just a great athlete but valued for his personal sportsmanship, generosity, humility, kindness”, Haigh adds.

It’s reckoned as the largest attendance at an Irish cricket game until Ireland played England in front of 9,500 in Malahide in 2013

Aside from getting to see cricketing royalty in the flesh, the opening day’s highlight may very well have been the towering performance of the legendary Trinity batter Frank Browning, who displayed consistent timing and finesse in dealing with what was an underwhelming display by the Aussie bowlers.

The impressive showing by Browning was not wholly unexpected, however, as Ger Siggins, a journalist and member of DUCC’s alumni board, explains: “Frank Browning has long been a fascination. He was a great batsman for Ireland and Trinity. He regularly scored against first-class sides.”

After striking up an excellent partnership with the Trinity captain C R Fausset, Browning was one of the best players on the field that day, and netted an impressive half-century of runs before finally being retired.

In truth, the opening day’s play was not as captivating as the assembled masses would have hoped for. The only performances worthy of noting – aside from a set from Cameron Highlander’s pipe band beside the Pavilion Bar – came from the collegiate side’s impressive fielding and from the bat of Browning.

The second day of play began in even more stunning conditions, with a crowd that surpassed the previous day’s gargantuan size. The Aussie bats began to display why they were unrivalled in their ability. Racking up a score of 276 runs (only 44 more than the previous day, but with a much better quality of cricket), the Aussies were firmly set to achieve the result that everyone had expected. 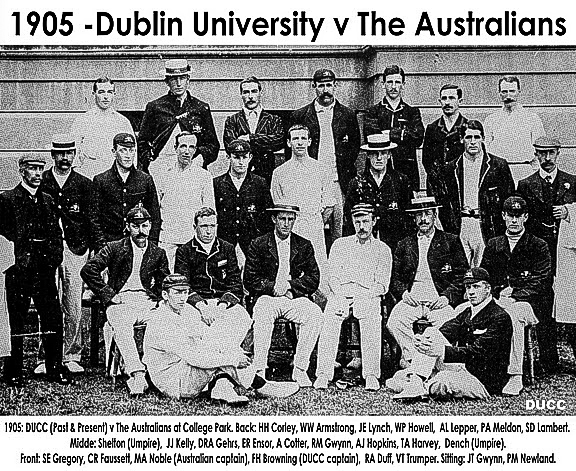 The DUCC side that lined out against Australia – the jewel in cricket’s crown at the time.

Trinity eventually succumbed to the excellence of the Australian bowling talent, with Duff in particular putting on a display to excite the Dublin crowd. The college side racked up respectable 136 runs, but fell far below the required 350 they needed to upset their opponents. Trinity’s Browning, the undisputed star of the first day, continued to show his own individual brilliance to net a second half-century of runs.

The massive crowd would prove to be historic in its own right, the 7,000 plus making it the largest crowd ever in College Park. As Siggins notes, “there are photos of very large crowds in College Park, of about 2 to 3,000, but this was a lot more. It’s reckoned as the largest attendance at an Irish cricket game until Ireland played England in front of 9,500 in Malahide in 2013”.

For the Trinity side, a respectable showing against one of the most famed cricket sides in history would have been the goal. But given the thousands of people they were able to entertain (not to mention the £500 they pocketed out of it), the visit of the Australian team was a success for all involved.

Australia have not returned to College Park since their 1905 appearance, and with the stature of their opponents on the day steadily diminishing since the 1930s, a rematch is unlikely. But the visit of this team, one of history’s finest-ever cricket outfits, is an enduring part of the College’s – and the club’s – history.