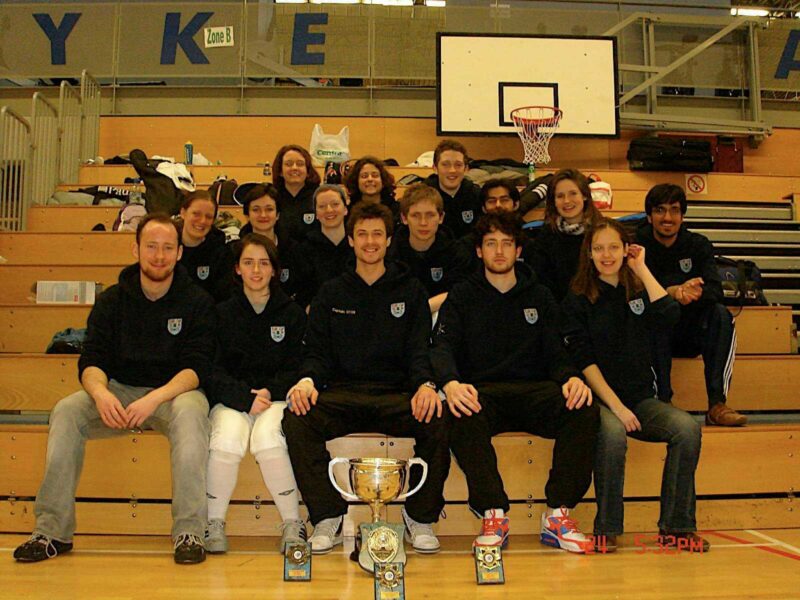 In 2008, the college fencing landscape could not have been more different than it is today. University College Dublin (UCD) were firmly established as the foremost salle d’arms in the country, and Dublin University Fencing Club (DUFC) were snapping at the heels of their Dublin rivals.

UCD had won six intervarsity titles in a row in the lead up to the 2008 iteration of the competition and would have been favoured by many to continue their streak. But, while neither UCD nor DUFC knew it, a new era of dominance was about to be ushered in. As current coach and then-DUFC fencer Colm Flynn tells The University Times, they were “sick of saying: ‘Next year’”.

“We were pretty close the previous year and UCD were on a bit of a streak. We had last won it in 2001, which was before my time, but UCD had won it every year since then. For a few of those years we were a decent bit off but in 2007 we had gotten pretty close – closer than we had been before. But they still took it.”

As the 2008 competition in Cork approached, Trinity took some extra measures to try to gain an extra inch over their competitors: “We were taking a more serious approach to it. The intervarsities weekend can, for some teams, be involved with a decent amount of drinking, but in 2008 that was the year we introduced a drinking ban on the main part of the weekend.”

we had a collection of results but had never won and were really looking to win it. We were sick of ‘next year’

“On the Sunday after – yes of course, by all means celebrate, but there’s a dinner on the Saturday night and some teams drink a decent bit at that but we don’t. We were doing things like that and taking it a bit more seriously.”

“Personally, and having talked to a few who were there, we were a bit sick of saying ‘next year’”, Flynn says. “At that stage I was doing my PhD, so it was my fifth intervarsities. So we had a collection of results but had never won and were really looking to win it. We were sick of ‘next year.’”

This was DUFC’s first year under coach Tristan Parris, who would go on to work with Olympian and former Trinity student Natalya Coyle. While he was young for a coach at the time, Flynn describes him as a “really high-level coach with plenty of experience”. He says DUFC’s acquisition of Parris “coincided with a lot of growth” for the club.

The format of the intervarsities sees the universities compete across six groups: men’s and women’s foil, epee and sabre categories. Each category follows a round robin format, with wins adding points to that team’s overall score. Flynn was fencing on the men’s epee team (epee being the heaviest of the three swords).

On the way to victory, Trinity claimed top spot in women’s foil and men’s foil as well as men’s epee. Winning three of six events normally guarantees overall victory, but Flynn wasn’t keen on popping the champagne until the ink had dried and all was confirmed: “It wasn’t as close as it felt.”

You look at that 13-year streak and think: ‘That’s way out there’

“We had been battling for it for a couple of years, and I remember talking to the guy who was running the event and keeping track of the results. And I was like: ‘Well, if they do that and we do this and what about head to head’, but he just said to me: ‘No. Colm, you’ve won it.’ I felt like that more than others did I think. I kept that paranoia of having the exact results and not counting our chickens before they hatched.”

After six years of seeing their rivals celebrating victory, DUFC had finally splintered UCD’s streak and would go on to equal the record streak of thirteen in a row, set by DUFC from 1979 to 1991. Suffice to say this beyond their wildest dreams, even after the elation of winning in Cork.

“We certainly weren’t thinking that far ahead. You couldn’t have expected it. You see, UCD’s six-year streak before 2008, and I think we had an eight-year one at some stage and you look at these and think: ‘Maybe they are doable.’ But you look at that 13-year streak and think: ‘That’s way out there.’”

Staggeringly, Flynn has been involved in all of the 13 wins either as a player or a coach. To this day, the 2008 tournament is close to the top of them all: ‘That year in Cork was probably the most exciting one.”

“The couple of years after that we completely walked them, and we kept getting stronger as they dropped off a little bit. I really enjoyed winning strong. But those ones where it was balanced was quite exciting. As regards the tension, 2008 was the biggest one”, he says.

The streak has completely transformed DUFC from a club on the margins of Trinity Sport’s radar to a performance pathway sport and one of the winningest clubs in Trinity right now.

“The first year I was in the club, it wasn’t in a very good structural or competitive place at that time. The numbers were small. Most people in the club got a place on the team, whereas now the team is selected from a much wider group of fencers. There are fencers who we would have been dying for five or six years ago who don’t get on the team today.”

“With Trinity Sport it’s good to be able to say: ‘Look, we have won this again, we are successful and we are performing.’ That was important in becoming a performance pathway sport”, he says.

With Trinity Sport it’s good to be able to say: ‘Look, we have won this again, we are successful and we are performing’

“And then as well as that, people don’t really know what fencing is about. People do this hand-wobble thing when you say that you fence and there’s a range of things – it’s elitist or it’s not a very tough sport or other kinds of things. We can show that it’s not just ‘we play around with swords’, and how we are a competitive group and we are the best in the country.”

“If you’re a student who wants to fence, this is the place to be”, Flynn adds.

“In 2008 we weren’t able to point to that [intervarsity titles]. We weren’t as organised as other clubs either. We weren’t having conversations with DUCAC [Dublin University Central Athletic Club] or Trinity Sport as we would be now. We didn’t have the same cache and had come from a pretty low ebb not too long earlier. We’re definitely in a better place now than we were. We are a serious club and a serious sport.”